Until I learned Hebrew, I saw Jews as frightening, scary, armed people who expelled us from our land in 1967, now working on finishing us off. Does that surprise you? 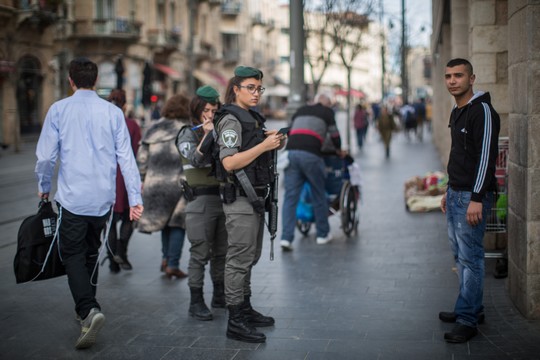 My name is Suleiman, I am 22 years old and I was born in Jerusalem’s Old City. Despite the fact that it is located only hundreds of meters from my home, for most of my life Jaffa Street in central Jerusalem was like a foreign, European country. In my childhood, the word “Jew” referred to either Israeli Border Police or riot police. West Jerusalem was a frightening place where death was always a possibility.

My life as an East Jerusalem kid was exceptionally frustrating. My parents made sure that my day began at school and ended at home. “Don’t buy anything from street vendors and don’t speak to strangers, and God help you if you go out with the boys to throw stones at Jews,” my grandmother told me every week, after handing me 50 shekels and imploring me, in a whisper, not to tell my mother.

I saw Jews as frightening, scary, and armed people who expelled us from our land in 1967, and were now working on finishing us off. An ultra-Orthodox man making his way to the Western Wall was a good enough reason for me to pick a different route. And the settlers? They are a completely different story. It was enough to see settlers accompanied by armed security guards in the Old City for the anxiety to paralyze me.

Does this surprise you? Come on. What did you expect? I didn’t speak a word of Hebrew my entire life, aside from the one sentence my dad forced me to remember: “Ani gar b’Yerushalayim,” I live in Jerusalem. This sentence was supposed to convince the Border Police officer at Damascus Gate that I simply wanted to return to my house. What did you expect? When the only Hebrew I knew was what I heard on the news, or from the police officer who handed out tickets in the neighborhood, or from those who wear knitted skullcaps who rampage through the Old City on “Jerusalem Day.”

After a few years, I decided to stray from the general East Jerusalem path and went to study in an Israeli academic institution. A year and a half ago I finished studying Hebrew at Hadassah Academic College in the heart of Jerusalem. Yes, I acquired my Hebrew in under a year and I am proud of that! That same year I was resigned to adopting an Israeli, even Ashkenazi, lifestyle. Instead of black coffee I drank cappuccinos. Instead of pita and falafel I stood in line at Aroma every morning for my coffee and, using the name “Shlomo” in order to hide the fact that I am Arab, so they don’t find out my secret. I was forced to change my habits in order to feel part of Israeli society.

Now I am working on my bachelor’s degree in politics and communications and I am astounded. I thought that Jews knew what they were talking about when they talked about Arabs. It turns out that they don’t actually know us at all. Because of my “exceptional” behavior, I am often given the nickname “Ashkenazified Arab,” “cultured Arab,” or “good Arab.” The majority of Jews I met would still gave me weird stares when I dared to speak Arabic, as if they did not expect that a man who wears fancy clothes and carries a laptop could be an Arab.

“Suleiman, you don’t look Arab,” I would hear over and over, not to mention remarks like, “I didn’t know you were Arab,” “You are different from all the other Arabs I know,” “Are you half-half?” and of course the classic: “You’re Christian, right?” Very quickly, I understood that Jews have no idea what an Arab actually is. In their view, an Arab is a Bedouin who rides a donkey and lives in a shack, wears a galabiya and uses a cane. And that’s the best case scenario. At worst, he is a disheveled kid who walks the streets in tight jeans, a rumpled t-shirt, a black bag in hand, and sometimes even a knife under his shirt. The Arab takes on other forms in the Jewish imagination — he can be a waiter who makes good hummus or a house cleaner.

Sometime I feel that my identity has gotten lost between all the other identities that I am forced to adopt on a daily basis. Among Arabs, I have become a traitor-heretic-Zionist who supports the occupation army, and all I am interested is Jewish girls. In the eyes of the Jews, on the other hand, I will always be “the Arab” — I will never be part of Israeli society, which I can never fully be part of no matter how much I try and “Ashkenazify” myself. But even during my most confused days, in the evenings, as I return to Shuafat refugee camp where I live, the police officers at the checkpoint always and immediately remind me which side I am on. 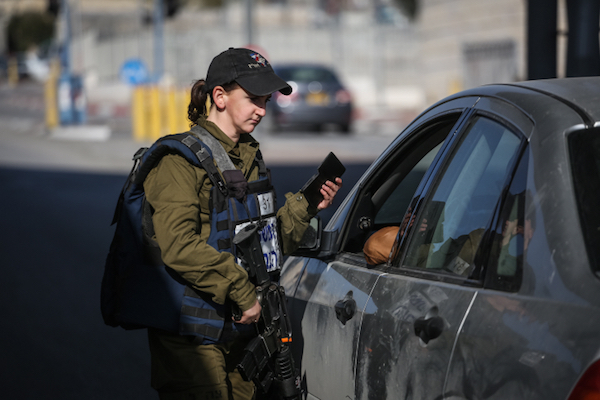 An Israeli military police officer checks IDs at the checkpoint at the entrance to Shuafat Refugee Camp in East Jerusalem, December 22, 2015. (Hadas Parush/Flash90)

Suleiman Maswadeh is an activist who studies political science and communications. This article was first published in Hebrew on Local Call. Read it here.