IDF night raids, an everyday occurrence in the occupied territories, ensure that Palestinians cannot feels safe in the one place where safety should be assured. 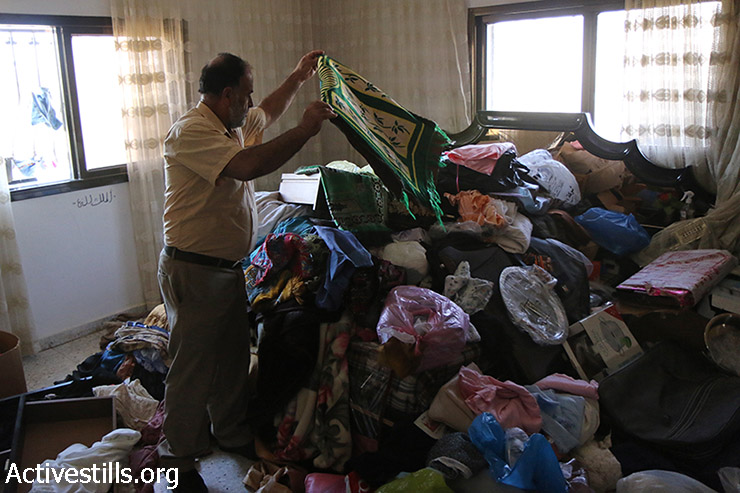 The results of a night raid by Israeli soldiers on the West Bank village of Salem, August 26, 2015. (Activestills)

Over the years, the Women’s Centre for Legal Aid and Counselling (WCLAC) has collected testimonies from Palestinian women in the West Bank, East Jerusalem and Gaza on a whole range of issues. However there is one issue, above all others, that stands out due to the frequency with which it occurs and the devastating impact it has on women, their children and entire communities: night raids conducted by the Israeli military into Palestinian villages and homes, which have been taking place on a nightly basis in the occupied territories for the past 48 years.

In a sample of 100 instances of night raids conducted since 2014, the one common thread mentioned by the women who provided testimonies to WCLAC was a sense of terror. The raids usually begin at around 2.00 a.m. with aggressive banging at the door or simply an explosion to blow it in. Masked soldiers storm the house as the family tries to comprehend what is happening. Sometimes a family member will be arrested, other times not. Sometimes there is violence, sometimes not. The house will be searched with reports of damaged furniture; wardrobes emptied with contents thrown to the floor, while soldiers leave muddy boot marks throughout the house.

Perhaps the most devastating impact these raids have is on the children. Mothers report that their children have problems sleeping after experiencing a night raid. Some children become aggressive, others wet their beds. No one feels safe in the one place where safety should be assured.

According to a recent report by WCLAC, it is estimated that the military conducts nearly 1,400 night raids each year, with over 65,000 since military law was imposed on the West Bank in 1967. These figures do not even include the more frequent military incursions that occur into Palestinian villages and cities during the day. Furthermore, our testimonies reveal that every night raid occurs on average within two kilometers of an Israeli settlement, and even closer to a road used by settlers. The simple fact is that to guarantee the protection of hundreds of thousands of Israeli civilians living in occupied territory, the army must engage in mass intimidation of the local population.

While this strategy is largely successful, it would be naïve to assume that it does not generate resentment and anger. The question is how long can this anger be contained and how is it likely to manifest itself?

Salwa Duaibis is the head of the International Advocacy Unit at the Women’s Centre for Legal Aid and Counselling (WCLAC).