There is a ceaseless movement of Israeli culture — and the diaspora experience is just waking up and testing its global limits. 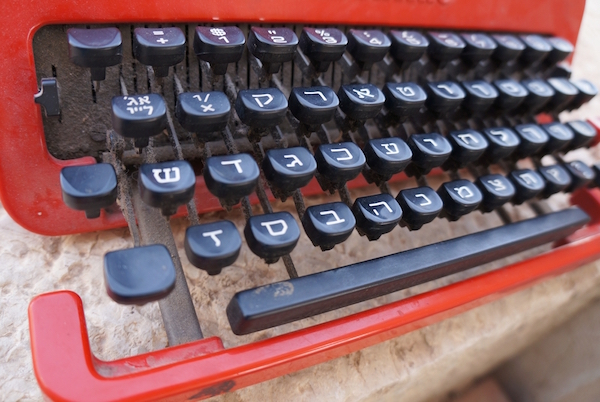 Literature is created in a space that is not a state or a country. The categorization of literature that is written outside or inside a country is problematic.

As such, we should understand that Hebrew literature from the get-go belongs to every country in which there are writers writing in Hebrew, or Israelis whose experience with the Hebrew language has shaped their memory, or citizens of the world who consume Israeli literature in one way or another.

So forgive me, but I will instead use the term “diasporic literature” — that which is written at times from a place of exile; sometimes from a small space that exists between our Jewish life and our life within the local culture written in the various different languages.

Diasporic literature detaches the Hebrew language, Judaism and Israeli identity from national boundaries, sharpens the weight of exposure to new cultures and transforms it from a majority language to a minority language.

Sapir Prize Winner Reuven Namdar, who writes in Hebrew in New York; or the Israeli author Ayelet Tsabari, who writes in Canadian English about her experience growing up in Petah Tikva, and whose first book made it to the New York Times Editor’s Choice list; or Hanno Haustein from Germany, who edits “Aviv,” a Hebrew-German journal; Yousef Sweid, who writes a column in Hebrew in the Berlin magazine Spitz; and of course Sayed Kashua, the Palestinian Israeli who writes in Hebrew from the U.S.

Diasporic literature certainly has its own language because it is created within a set of values and terms that is entirely distinct from Israeli culture, yet remains associated with it and with the local culture. For example, the third part of my first book of short stories, “Remnants of the Cursed Book,” published by Zmora Bitan, is certainly connected to Berlin culture and constitutes an integral part of Israeli society, like all the stories of all the other immigrants in the city, who are part of Berlin culture even if they are not read there.

In my first year and a half in Berlin, literarily speaking, I wanted to celebrate my life in the multi-cultural metropolis – which is why I published an e-book of farewell poems, full of emotion and a first set of immigration poems called “Last Tango in Berlin.” On the other hand, I had a desire to document my new life, and that’s why I wrote the weekly Haaretz column, “An Israeli in Berlin.” But today I don’t celebrate emigration.

The continuation of diasporic literature is sometimes dependent on the next generation, which doesn’t usually continue writing in Hebrew. But there is a ceaseless movement of Israeli culture — and the diaspora experience is just waking up and testing its global limits.

My first full novel, which I have been working on the last few years, was written in the belly of an airplane of homesickness, with a passport of longing, en route to yearning. It reflects my gum-like soul, being stretched between Germany and Israel, and shows the way in which two cultures cannot be simply disconnected.

Something interesting happened to me recently, when I was among the organizers of multi-language performance and poetry “Hafla” slams in the city. I noticed that the poems I wrote in Hebrew were addressed to a Hebrew-speaking audience, not the local audience. For the first time in my life I decided to write one spoken-word poem in English for the next event. We’ll see how it works.

I don’t miss those who are exclusionary. Like closing off the Sapir Prize to those who live outside Israel. Is that the same Zionism that wants one nation, with one language in one land? Are we really located in just one place in this age of Internet and globalization? Can we really reduce Israeli identity to its physical borders (whatever those may be)? Do we want to shed all the books written throughout time outside Israel?

Literature should be judged by its beauty, its power to imagine new life, and not the passport of its creators. That is how it has always been, and how it will always be.