If Netanyahu was serious about talks, he would have used the first opportunity to rid the government of the settlers, before moving on to isolate the radicals in his own party. Until we see such a change, the peace process will remain mostly fake.

Israeli daily Yedioth Ahronoth’s released a poll on Passover evening examining the option that former Likud Minister Moshe Kahlon run on his own ticket in the coming elections. According to the poll results, Kahlon could win up to 10 seats, most of them from voters of Yesh Atid and Likud.

This is the second election poll published this week (the previous one had better numbers for Netanyahu), contributing to a feeling of a looming political crisis. The rift between Prime Minister Benjamin Netanyahu and the leader of the right-wing Jewish Home party Naftali Bennett is becoming more apparent. Bennett is now threatening to leave the government if Israel goes forward with the fourth and final prisoner release, which includes 14 Palestinians citizens of Israel, as demanded by Mahmoud Abbas. Recently, there have been renewed suggestions that a deal on the prisoner release and the continuation of the negotiations will take place, with the U.S. releasing Israeli spy Jonathan Pollard as a gesture toward Netanyahu.

Bennett, to be sure, doesn’t want to leave the government; his top minister, Uri Ariel, who heads the Ministry of Construction and Housing, is even less inclined to do so. The Israeli government is based on a political arrangement that suits the settlers well – they support measures on civilian issues that benefit Yair Lapid’s secular voters, and in exchange they get an (almost) free hand in the West Bank. Uriel, a veteran politician, knows that this is a once in a lifetime opportunity to create facts on the ground that would end, once and for all, all talk of evacuating West Bank settlements. Despite his radical views, he has welcomed the diplomatic process; while everybody was busy with the talks, he continued settling occupied land with Jews.

At the same time, the Jewish Home has a constituency to answer to, and the settler movement is split between the pragmatics and the radicals, the latter of which are not interested in such trade offs. This is the context with which we should view the recent threats: Bennett is probably betting that the Pollard–prisoners-negotiations deal won’t go through and that talks won’t be extended. Thus, he will be seen as the one who took a firm stance against capitulations without actually paying the price for it. This is indeed the most likely scenario.

The problem with the talks isn’t the prisoner issue, but rather the Israeli refusal to discuss the meaningful elements of a deal – borders, settlements and Jerusalem. Instead, Netanyahu has been throwing all kinds of hurdles, such as the recognition of a Israel as a “Jewish State,” as well as indefinite Israeli control over the eastern border of a future Palestinian entity, and so on. By now it is clear even to the Americans that accepting Netanyahu’s demand on one issue – such as the Jewish State – won’t deliver a breakthrough, but will simply lead to the next “core issue” that Bibi introduces. 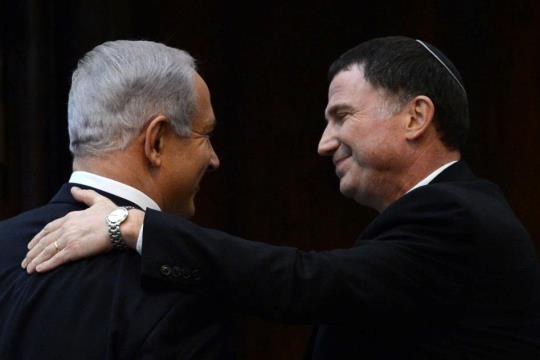 Netanyahu doesn’t want to change the government. An alternative coalition – for example, with Labor replacing the Jewish Home – will leave Netanyahu at the mercy of his rivals, and would probably lead to new elections in the near future. But things might get out of control, especially if outside pressure increases. The Israeli elites are clearly troubled by the EU’s response in case the talks collapse.

Should progress be made on the Palestinian issue, a political crisis in Israel is inevitable. This is the way it has always gone: Rabin lost part of his coalition – and then his life – following the signing of the Oslo Accords; Sharon had to leave Likud and form a new party; and Netanyahu’s first government collapsed over the Wye River Memorandum. Any change in the status quo, one that goes beyond empty gestures like the release of prisoners, is likely to energize what is already a powerful hard right. If Netanyahu was serious about the talks, he would have used the first opportunity to rid the government of Bennett and the settlers, before moving on to isolate the settlers in his own party. Until we see such a change, the process will remain mostly fake.

One last comment: When looking at the Israeli political system, the feeling is that there is no alternative to Bibi. However, one opposition MK I spoke to recently said that “Bibi is done. It’s over.” Wishful thinking? Perhaps. But he may not be that wrong. The current coalition is weak – much weaker than the previous one, and the only thing that holds it together is the fear that Yair Lapid and Tzipi Livni share from the possibility of holding elections. If Israel is faced with a real decision moment on the Palestinian issue – something Kerry has failed to deliver so far – major political developments will take place. Politicians who see themselves as an alternative to Bibi – from Kahlon to former Shin Bet head Yuval Diskin to Liberman – have become more vocal, as they too sense that this moment may be closer than one might think.

Related:
Oslo Accord architect Ron Pundak dies at 59
The rejectionist: Netanyahu and the peace talks