Netanyahu blew a lot of hot air in a Trump-like speech to his party loyalists last week. He did speak one truth, however: the international community can end the occupation if it wants. 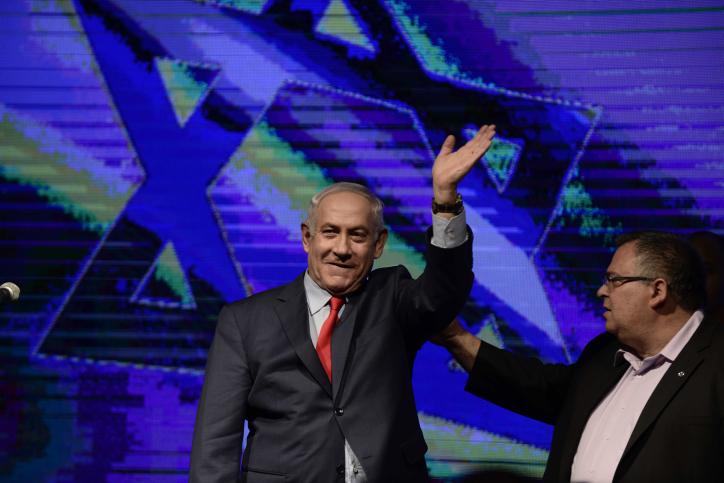 Israeli Prime Minister Binyamin Netanyahu’s speech to a cheering crowd of party loyalists last week was not geared towards an international audience: it was meant to rally his political base in the face of several high-profile corruption investigations into him and those closest to him.

The prime minister slung myriad false accusations against the media and “the left,” taken right from the scripts followed by U.S. President Trump and Hungarian Prime Minister Orbán. Mr. Netanyahu did state one essential truth, however: the world can bring an end to Israel’s occupation of Palestine.

In his speech, Netanyahu ridiculed former Prime Minister Ehud Barak (“an old man with a new beard”) for a warning he made in 2011 – when serving as defense minister under Netanyahu – that Israel was about to face a “diplomatic tsunami”: “There’s an international movement towards recognizing a Palestinian state within the 1967 borders… Israel’s delegitimization is on the horizon, even if the citizens don’t see it. It’s dangerous and requires action,” Barak said at the time.

Six years have passed since Barak’s warning – six years of more settlement building for Israelis and dispossession for Palestinians, six more years of impunity, violence, and oppression. And indeed – six more years without a diplomatic tsunami.

Netanyahu’s entire strategy for the future of Israeli rule over the Palestinian people is the creeping advancement of Israel’s long-term goals in the occupied territories, while dodging the only thing that can get us out of this reality without violence: international consequences. In celebrating his accomplishment, the prime minister is also spelling out, for those who may still have doubts, how effective the international community could be if it finally decided to stop its acquiescence.

Perpetuating the occupation and paying no price for it – having it both ways – is Netanyahu’s single goal. Breaking the congruity of that mold is the biggest hope we have of finally ending the occupation.

But the longer international action fails to arrive, the longer we go without a “diplomatic tsunami” or even a hint of a passing rainstorm – the more convincing the argument Netanyahu (and much of Israel’s aspiring political leadership) can make to the Israeli public that occupation with zero diplomatic consequences can go on as it has so far. The fact that global diplomatic attention is currently focused elsewhere certainly serves this Israeli strategy, but relying on the current location of the international community’s constantly shifting focus is short-sighted. When circumstances demand that the world’s attention return to the occupation – and those circumstances will arrive – the reality we all face will be so much more challenging; heaven help us, it will be far bloodier than it is today.

Not only that, but as time goes by with Israel continuing to have it both ways, Israelis who support endless occupation alongside a “diplomatic spring” are not only emboldened in their faith, but the Israeli public’s sense that international challenges may actually loom on some horizon is further and further eroded.

On this single point — laughing away an old warning of a “diplomatic tsunami” triggered by Israel’s perpetual-occupation policies — the prime minister was convincing simply because he was right. For anyone who takes seriously nonviolently ending the occupation, there is an obvious, simple response: stop the acquiescence, end international complicity, demonstrate to the Israeli public that perpetual occupation at no cost is no longer an option, and take international action. Otherwise, the only tsunami in effect will continue to be the Israeli tide that is gradually drowning Palestine in a mix of arrogance and oppression.