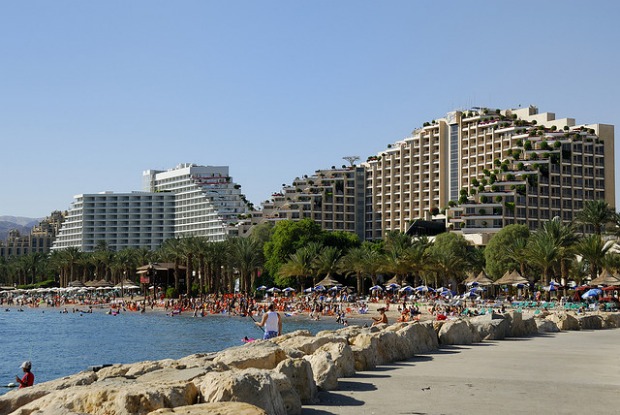 I happened to be in Eilat this weekend for a deserved rest as Egyptian President Hosni Mubarak was spending his last hours in Cairo. I was watching Fox News (that’s all they had – what can I do?) as the reporter suddenly heard the crowd at Tahrir square begin to roar. The roar was getting louder and louder, and nobody could figure out what was going on. Only a few minutes later, it was understood that the roar was a roar of victory. Mubarak had resigned.

I have to admit, I got a lump in my throat. It was definitely on of the most moving things I’ve witnessed, albeit from afar.

But after a few minutes, two other feelings took over:

Jealousy: I wish Israelis would take to the streets to make their country better.

Fright: What does this mean for the region I live in? The big unknown.
.

.
The hypocrisy of it all

Since the revolution began, and up to the grand finale on Friday, I enjoyed watching the news networks and seeing leader after leader squirm in front of the cameras, attempting to explain why they supported Mubarak through the years, despite being fully aware of his crimes. They didn’t even flinch, they had an answer for everything. A source of stability, the peace treaty with Israel, blah blah blah. How many Egyptians were tortured or died for that so-called stability? I wonder if we’ll ever know.

I also thought about my own hypocrisy, as someone who visited Sinai many times during Mubarak’s reign. Shouldn’t I – and my other left-wing brethren – refrained from visiting that country under his rule? Was going to Sinai pretty much saying: “Yeah, I know this is a dictatorship – but I gotta have fun sometimes, too!”?

And then I got to thinking about the crimes of other dictators in the region. The Syrians, the Saudis and others. And I did something, which I can’t decide if it’s foolish or not: I compared their crimes to the crime of the 43 year occupation.

And I thought of all the people, all the organizations and all the countries who vehemently – and rightfully so – detest and protest the ugly occupation of the Palestinian people.

And I thought of all those courageous international activists who come to Israel and brave the tear gas in Bilin every Friday, together with those occupied Palestinians.

And I asked myself: why have they never gone to Syria or to Egypt to protest? I mean, if they’re already in the region, why not go protest another evil, just as bad?

But is it? Is it just as bad? Is the occupation a worse crime than those of Mubarak or Assad?

Are Palestinian lives more sacred than those of Egyptians, Saudis, Syrians or Iranians?

Or maybe I should ask: Are Jewish/Israeli crimes worse than those of Egyptians, Saudis, Syrians or Iranians?

Is occupation a crime that must be stopped immediately? Yes.

Is Israel singled out? Yes, I believe it is.
.

.
The irony of it all

Just hours before Mubarak resigned, the missus and I went for a walk on the beach promenade, known today as “The Gandhi Boardwalk”. It’s named after former IDF General and politician Rehavam “Gandhi” Ze’evi, who was murdered by Palestinians in a hotel in Jerusalem. 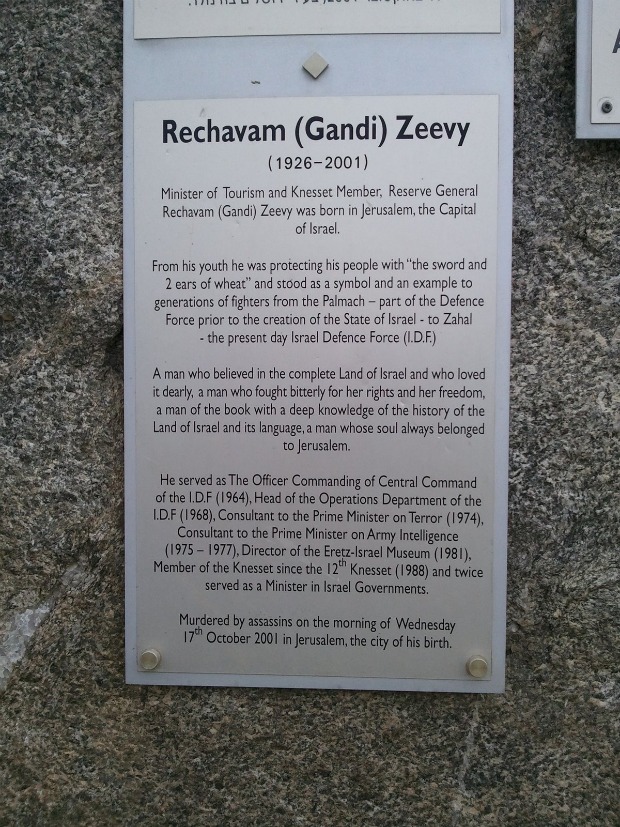 Ze’evi was a dangerous man. He was a racist who fooled a lot of people into believing he wasn’t one. There was something cool and calculated about him, something that reminds me of today’s Avigdor Lieberman. His legacy is an ugly one, as ugly as the crime that brought a premature ending to his life.

As I looked at the memorial for him on the boardwalk, I thought: How Israeli. How typically Israeli it is to name the boardwalk of Eilat, a city nestled between two countries it has made peace with, after this man who said “I am afraid of peace”. After this man, who was so far from anything that even sounded like peace.

I found it so idiotic, that I asked the missus to take a picture of me, as I held my Gap shopping bag and grinned. Like an idiot. It seemed like the only idiotic thing I could do to match the deed of the Eilat municipality. 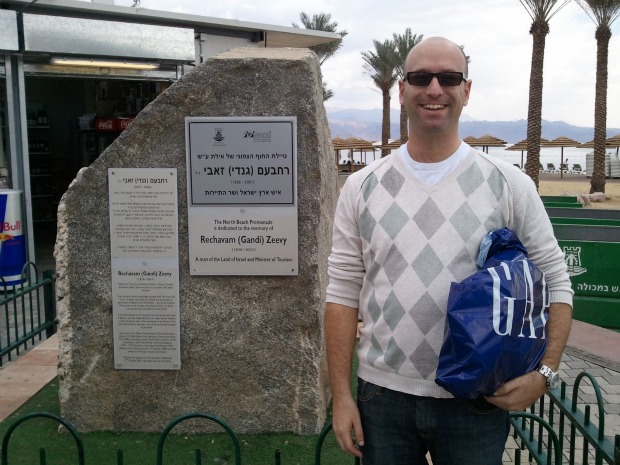 Clash of the idiots?

.
The ugliness of it all

Eilat is an ugly town. They’ve turned it into a Mideast Vegas, and even managed to ruin the nice boardwalk they once had with dozens of stalls that block the view of the sea.

I used to consider Eilat as a rest stop on the way to Sinai, in my opinion one of the most beautiful spots on earth. Even though many of my friends still go, Sinai is no longer as safe as it used to be, and particularly now that I’m a family guy, precautions must be taken.

I can only hope that Egyptian democracy will once again ease passage to that wonderful peninsula.

I miss the sahlab.