A half-empty Knesset voted Tuesday to approve an electoral reform bill theoretically intended to stabilize governance in a country with a notoriously unstable system by raising the voting threshold to 3.25% from the current 2% (itself an increase from earlier years), among other reforms. To understand why change elicits such visceral reactions, it should be viewed in the context of three aspects: the Israeli political system, Jewish-Arab relations, and majority-minority relations more broadly.

No party in Israel has ever won an absolute majority in the Knesset, and there has always been a governing coalition. Those coalitions depend on small parties – usually ultra-Orthodox, with a few exceptions including the current government. Arabs in Israel are also represented by small parties, traditionally they support three different lists: Hadash – a Jewish-Arab list; Balad; and the United Arab List. Together, these parties currently have 11 seats in Knesset.

Arab parties have never been genuine coalition partners. Thus ultra-Orthodox parties (who represent about 10% of Israeli society at present) have had disproportionate power throughout Israel’s history, while Arab parties, representing over 20% of the population, have effectively no influence on governance in Israel.

Current coalition members argued that the higher threshold would discourage the proliferation of tiny parties and sectoral fragmentation. Arab representation need not be harmed, as their parties can simply merge. This is a strange argument coming from a coalition whose leading party Likud-Beitenu just two weeks ago proposed a bill that would mandate separate representatives for Christian and Muslim Arabs on an equal employment commission. That was considered deeply offensive to Arabs, a transparent and racist “divide and conquer” effort when in fact Christians and Muslims are discriminated against quite equally.

Further, when parties merge in Israel, they usually lose. Merged parties almost always receive fewer seats than the two separate parties combined (the election results for the merger of Likud and Israel Beiteinu is a good example: the two parties held 42 seats in the previous Knesset, and 31 as a merged party). The coalition partners surely know this.

In response, Arab leaders insist on their political diversity, and their right to be represented by a range of parties rather than forced political uniformity.  It is true that I have in the past also heard some Arabs express the desire for their political parties to unite and end political squabbling.

The point is, a Jewish government should not tell Arab citizens how to represent themselves at all.

The new law arrives after the previous Knesset went on an unprecedented legislative assault on Arabs. It passed the Association law, which allows discrimination in housing. It passed the Nakba law, telling them that their historical experiences,  memories and national narrative are not legitimate in Israel. The anti-boycott law currently under debate is a signal to them too, that non-violent political protest on behalf of Palestinians under occupation is a civil offense.

The current government seems committed to continuing this feverish mission of alienation. Foreign Minister Avigdor Liberman has normalized the idea of stripping Arabs of their citizenship, and the government is now forcing political uniformity on them at best, or curtailing representation at worst.

At the same time, the previous government did make some significant progress on economic integration of Arab society. More recently, the Justice Ministry has been running a series of public service announcements against discrimination in general, and specifically in the workplace. This gives the nasty impression that the Israeli government in fact seeks economic contribution and political suppression.

In divided societies, there will always be tension between representation and stability. But it is also the case that a healthy dose of representation contributes to stability – by giving minorities a genuine role in shaping society.

At present, as noted, Arab parties are represented in legislature at less than half their proportion in Israeli society (20%). In the judiciary, a 2011 Haaretz report observes that they are eight percent of judges, a major improvement from the past.

Arab parties have no representation in the executive. There have been two Arab ministers (one was Druze) in Israel’s history; now there are none.

Yet Liberman accused the opposition of hysteria, and insisted that it’s perfectly logical to adopt an electoral threshold similar to Austria, Norway, Sweden, Germany and New Zealand. (He also proved himself again to be unhinged, by calling the opposition: “whiners, post-Zionists, and terrorist representatives.”)

The comparison is badly misleading. Israel is a deeply divided society, in the words of Arendt Lijphart, the political science guru on power sharing models. It’s more like Belgium, Bosnia, Switzerland or Lebanon, with a significant indigenous national minority, yet unlike those others it has no model of power sharing or recognition of collective rights. New Zealand too has undertaken specific policies to ensure parliamentary representation to proportionally reflect the Maori minority in its population.

At present, Israel has neither sufficient representation nor political stability. Daniel Friedman, a controversial former Minister of Justice, argued that the new law will bring neither, because coalitions are not toppled by parties that received 2-3.25% of the vote. Indeed, the smallest party in the executive today, Tzipi Livni’s Hatnua, got 5%  of the vote – and she’s not the one threatening to bolt.

Finally, Israel cannot afford to ignore the root causes and sparks of ethnic tension and even state breakup in other regions. The deepest grievances among minorities tend to be actions that push them out instead of drawing them in. These often take legislative form: language laws, such as in Ukraine (and Moldova before that), or limitations on minority political representation, such as Cyprus in 1963 – which touched off the 50-year (and counting) secessionist conflict.

People sometimes forget the basic fact that up to now, Israel’s Arab population has been integrationist rather than isolationist (like Haredim), and has never been secessionist.

It’s simple: people who feel alienated might eventually opt out. For the first time I can remember, an op-ed in Haaretz by Khaled Titi said that following this legislation, he hopes that the Arabs will put themselves on a course toward political autonomy. 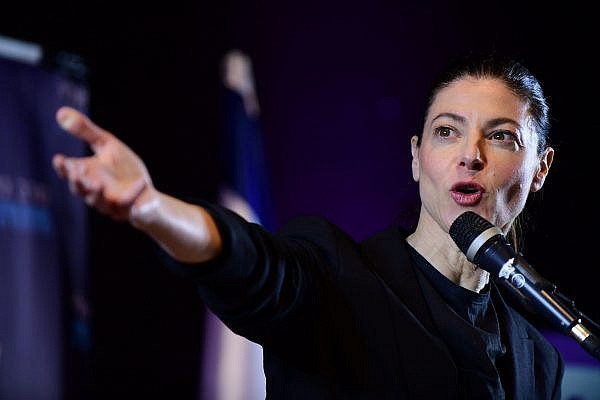 Can she handle it? How the Israeli media covers women politicians
Women running for the Knesset have to overcome not only voters' gender stereotypes, but a media landscape that is heavily skewed in men's favor.
By Noa Balf March 23, 2021