Trump has shown that the U.S.’s democracy is just as flawed and illusory as the many countries that it has preached to for decades. And that’s a good thing to admit. 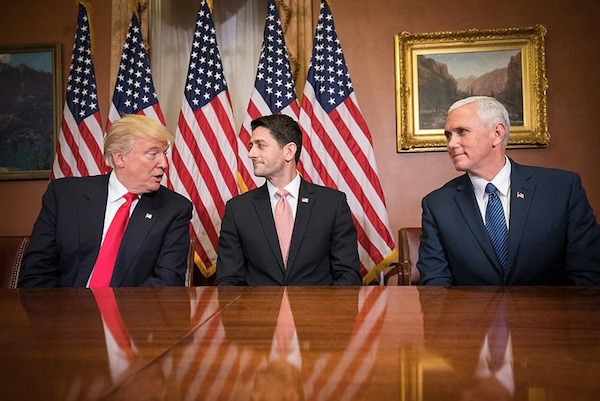 Speaker Paul Ryan meets with the President and Vice President-elect, Donald Trump and Gov. Mike Pence on Capitol Hill after their election. (Office of the Speaker of the House)

In a Daily Show segment covering the U.S. presidential race last year, Trevor Noah told his audience that, “as an African, there’s just something familiar about Trump.” Noah compared some of Trump’s statements with those of leaders from his home continent – Zimbabwe’s Robert Mugabe, Uganda’s Idi Amin, South Africa’s Jacob Zuma, and Libya’s Muammar Gaddafi – concluding that Trump is actually “the perfect African president.” It was a joke that pointed to a sobering reality: American politicians were not so different from the “crazy” personalities seen in other parts of the world.

In recent years the American entertainment industry has been fascinated by the fallacies of the country’s political culture. If the most popular political drama a decade ago was The West Wing – a revering insight into the daily workings of the White House – today it is House of Cards – a sinister story of the vicious lengths politicians will go to in the pursuit of power.

After Trump’s victory this week, however, the disturbing rise of Frank Underwood in House of Cards no longer seems so fictional. A megalomaniacal businessman, who himself gained fame through a television show, was just made the most powerful leader in the world. Many people’s attitudes toward voting this year felt more like personality contests over American Idol singers than serious considerations over policy issues. The U.S. political system now mirrors the eccentric plot lines and characters we watch on the screen – and we have yet to absorb the fact that they have spilled into our real lives.

For many people outside the U.S., including in the Middle East, there is a bit of schadenfreude in watching Trump tear down what’s left of the country’s image of political integrity. Even those who have long despised and criticized the American political system often believed that there was still a democratic culture that made the U.S. somewhat unique. Now, with his increasingly outlandish policies, conduct, and rhetoric becoming mainstream (and ballot-winning) political discourse, Trump has proven that America’s democracy is in fact just as flawed and illusory as the many countries that the U.S. government has preached to for decades.

The decline of America’s “exceptional” image in the eyes of the world did not start with Trump. Americans and others have long debunked the the country’s narratives and institutions, from the electoral college to its military ventures to the “American dream.” In recent years alone, the Black Lives movement has revived attention toward the racism and brutality that have persisted since slavery and Jim Crow. Bernie Sanders’ campaign for middle- and working-class families highlighted the widening inequality caused by uncontrolled capitalism. The Standing Rock protests against the Dakota Access Pipeline illustrate the ongoing erasure of indigenous people’s heritage and destruction of the environment. The partisan antics of both major parties in Congress reveal how even basic governance in the U.S. is mired in tribalistic mentalities. Trump is therefore hardly the worst of America’s problems; he just has the biggest spotlight.

There is no doubt that Trump’s presidency will have profound and dangerous effects, especially in an interconnected world where the U.S. still holds enormous power. But it should also be a chance for many Americans (at least those who didn’t vote for Trump) to recognize that their country’s myth of exceptionalism – encouraged from history classes to football games – has blinded them to the need for deep social and political change. As the world finds that its problems are prevalent in the U.S. too, Americans would benefit from realizing in turn that – to use the words of Will McAvoy in The Newsroom – “America is not the greatest country in the world.” They may find it to be a liberating fact to admit – and a necessary step to confront the challenges that will unfold in the Trump years ahead.