There is no consensus on what pro-Israel means; even opposing political groups – like AIPAC and J Street – parade the term as a badge of honor. Pro-Israel has come to mean different things for different people, necessitating the introduction of a new vocabulary. 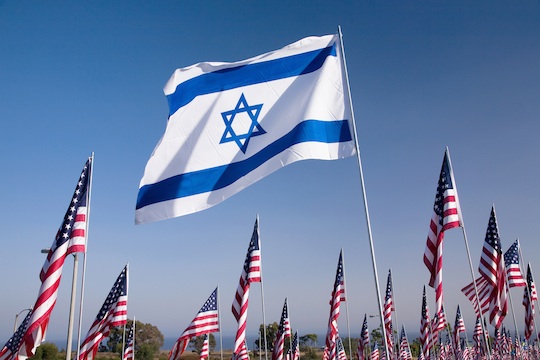 With abortion set to take national center stage in next year’s U.S. midterm election debates, it seems as though the clash between pro-life and pro-choice will steal the limelight. The very vocabulary we use forebodes the vitriolic tit-for-tat looming in the distance, each side debasing the other for grave injustices – either subverting women’s basic rights or mercilessly slaughtering our newborns.

But we all know these slogans, which were birthed of propagandist public relations, have a loose relationship with the truth. Pro-life and pro-choice attack straw men and women. Most Democrats do not rejoice in abortion, nor do most Republicans seek to degrade the status of women. In fact, national polls generally show that a healthy majority of Americans believe in safe and legal abortions during the first trimester, relegating the heart of the controversy to what the reasonable limits for aborting pregnancies should be.

Our country’s Israel debate has a parallel vocabulary problem. When the average American encounters Israeli politics in the mainstream media, chances are that discourse centers around two potent battle cries: pro-Israel and pro-Palestinian. The crippling predicament, however, is that in each case there is no single, coherent definition of the term. Year after year, we are talking past each other.

The 2012 presidential race between incumbent Barack Obama and challenger Mitt Romney serves as a recognizable example. Throughout the campaign, both candidates ceaselessly regurgitated different configurations of the pro-Israel line: “we stand with Israel,” “we have Israel’s back,” “our commitment to Israel is unshakable,” “our bond with Israel is unbreakable.”

But what did Obama and Romney mean? Were they “committed” to Israel as a state regardless of the ruling coalition or were they committed to the policies of the regime currently in power? Did they “stand with” Israel Proper behind the Green Line or a Greater Israel and its settlements as well? Did they “have Israel’s back” solely if Iran attacked or also in their intermittent retaliatory shelling of Gaza which has always left civilian bodies in its wake?

In fact, the pro-Israel line is sufficiently ambiguous that its proponents cannot be held accountable to any of these particular policy ambitions. The questions have no end. Does being pro-Palestinian necessarily mean being anti-Israel? What about vice versa? Is someone who identifies as pro-Israel by definition a Zionist? Are pro/anti-Israel and pro/anti-Palestinian each dichotomies or spectra? There are no definitive answers.

This is because there is no consensus on what pro-Israel means when even opponent political groups – such as the Israel lobbies of both AIPAC and J Street – parade the term as a badge of honor. In today’s postmodern world, pro-Israel has come to mean different things for different people. We are all undoubtedly speaking different languages while feigning comprehension – but why?

The function of these soundbites, much alike pro-choice and pro-life, is not to delineate clear policy prescriptions or political ideologies but rather to vilify our rivals. We all remember when Mitt Romney, in accepting the Republican presidential nomination, declared that “President Obama has thrown allies like Israel under the bus,” or when he suggested that Obama’s goal was to “put daylight between the United States and Israel.” While remaining silent on the tough questions and espousing a nearly identical foreign policy, Romney used the anti-Israel bludgeon to spin the media into a frenzy about Obama’s “Jewish problem.”

The frenzy ended up for naught, since Obama beat Romney for the Jewish vote by more than two to one. The consequence of assaults like these, however, is that more time is spent reassuring the public of one’s pro-Israel credibility than discussing issues of substance to move the deliberation forward.

The recent turbulence over the confirmation of Secretary of Defense Chuck Hagel is exemplary. Like Obama, Hagel had also been accused of having a “Jewish problem.” Republican Texas Senator Ted Cruz claimed during Hagel’s confirmation hearing that “[his] record as a United States Senator… demonstrates greater antagonism for the nation of Israel than any other member of this body.” According to Cruz and his partners, Hagel is pro-Palestinian and anti-Israel for suggesting that the Palestinians had “legitimate grievances” against Israel – the audacity!

For making statements far more tempered than in much of the Israeli media – MK Tzipi Livni, for example, recently joined the club of Israeli politicians warning of future Israeli apartheid – Hagel was put on the defensive. When asked if he concurred that a resolution to the Israeli-Palestinian conflict involved an Israeli withdrawal to pre-1967 borders (an integral component of the parameters engrained in the peace process by our ever-malevolent former President Bill Clinton), Hagel bleakly replied that he affirmed Israel’s right to exist, encouraged peace, and believed the issue would be resolved in negotiations. In the blink of an eye, any inkling of profundity on the United States’ role as a broker of Israeli-Palestinian reconciliation evaporated.

Of course, the inadequacy of the pro-Israel/pro-Palestinian bumper sticker war does not solely apply to the national arena. Our vocabulary stymies substantive Israel-related conversations in the workplace, in congregations and even among friends and family. We need a change.

Inspired by progressive vanguard Planned Parenthood’s recent campaign to curb these labels in favor of expanding “authentic” discourse on abortion, I propose we eliminate these terms altogether. We should begin resuscitating public discourse by introducing – then debating – alternatives.

Secretary of State John Kerry has recently suggested that the “window for a two-state solution is shutting.” If his attempts at reviving negotiations end up in vain, can we sleep at night knowing that our incessant adversarial smearing is partially to blame for the intractability of a resolution to this conflict?

Let us begin by replacing our nation’s vocabulary. Let us find new words that embrace vibrant political debate rather than shut it down. Let us start anew.