Despite positioning itself as the opposition party, estimates are that the hawkish Mofaz will join Netanyahu’s government following the 2013 elections. 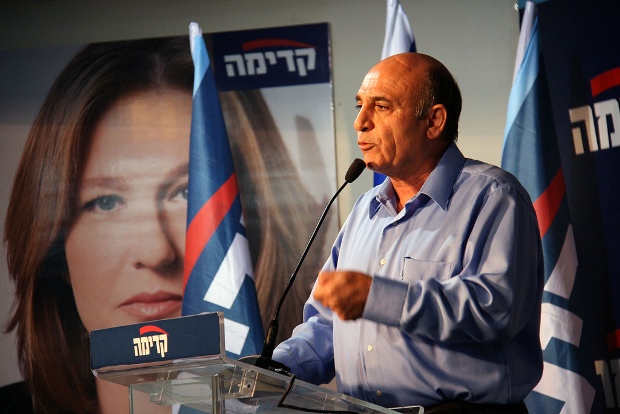 Shaul Mofaz, 64, won the Kadima primaries decisively yesterday, beating Tzipi Livni 62%-38%. Livni chaired the party since the resignation of former Prime Minister Ehud Olmert over corruption allegations. Both candidates represent the Israeli security establishment: Iranian-born Mofaz was Chief of Staff during the Second Intifada and defense minister under Ariel Sharon; Livni served in the Mossad. The third candidate, Avi Dichter, who withdrew from the race last week, is a former head of the Internal Security Service, the Shabak.

1.  Voters punished Livni for both failing to excel as a leader of the opposition and for not entering the Netanyahu government and influencing “from within.” The main argument for Livni was her ability to draw more votes; she led a successful campaign in 2009 and ended with 28 Knesset seats – one more than the Likud – but recently Livni had been polling in the mid-teens, not much more than Mofaz. These polls pretty much sealed her political fate.

2.    Primaries in Israel are a direct, closed, national vote. Party members need to register well in advance and pay annual party dues. Less than half of Kadima members voted, a fact which made the party machine, controlled by Mofaz, tremendously influential. This machine will also help him in the general elections. Though it lost half of its supporters to Labor and to Yair Lapid, Kadima will not disappear – for now.

3.    Livni’s loss – estimates are that she will take a break from political life – marks the final note in the Sharon era. Ariel Sharon, who founded Kadima, kept both Livni and Olmert as potential successors, finally choosing Olmert as his number two. After Sharon was hospitalized, both Olmert and later Livni enjoyed the support of Sharon’s advisors and family. Sharon’s son, Omri – former MK who served a prison term in order to save his father from one – made a last minute effort to save Livni’s candidacy, but to no avail.

The previous decade was the Sharon era; we are now officially in the Netanyahu decade. Sharon and his people had the diplomatic preferences and the political style of old Mapai Party (this is part of the reason that they found it so easy to form a unity government with Labor people). A tendency to favor the use of military force, combined with diplomatic initiatives – whether Sharon’s disengagement from Gaza or Olmert and Livni’s peace talks – that provided them with international legitimacy. Netanyahu is more like Yitzhak Shamir, the previous prime minister to come out of the revisionist family: Relying on a coalition with the settlers and the religious circles, refusing to make concessions or enter meaningful negotiations, and extremely cautious before implementing military force. Unlike all prime ministers from Labor or Kadima, Netanyahu – soon to be the longest serving PM since David Ben Gurion – Never initiated a large scale military operation. Neither did Shamir.

4.    Shaul Mofaz’s views are a mystery. Mofaz was never considered extremely bright or articulate, but he is growing to be a skillful politician, as his ousting of Livni proved. He has criticized Netanyahu for his confrontations with the U.S., his inflammatory statements on Iran and the lack of diplomatic courage, but these usually sounded like campaign jargon, intended to position Mofaz as a statesman. He did though have one out-of-the box idea: Despite being considered as a representative of the right flank of Kadima – he is likely to join Netanyahu’s next government – Mofaz is the only leading Israeli politician to advocate negotiations with Hamas.

5.    Mofaz will be the first Sephardi Jew (“Mizrachi” or “Eastern” Jew, mostly from the Middle East and North Africa) to lead the largest Knesset party into elections. Labor had two Sepharadim as chairmen – Binyamin Ben Eliezer and Amir Peretz – [Correction: After Barak resigned in 2002, Labor under Ben Eliezer was indeed the largest party, with 26 seats as opposed to Likud’s 19, but Ben-Eliezer lost the primaries to Amram Mitzna and didn’t get to lead the party in the 2003 elections]. Curiously enough, of the three parties which lead the country, the political “home” of the Sepharadim – Likud – never had a Sephardi Jew as its leader. All Israeli prime ministers to this day were either Jews born in Eastern Europe or their descendants.