A new documentary shows how the degradation and physical abuse suffered by Palestinians in Israeli jails means that even after their release, they haven’t escaped prison.

A scene from the film “Ghost Hunting.”

A month ago, on January 29, Abdallah Moubarak was released from a year-long administrative detention. Three weeks later, the film he acted in a short time before his detention — “Ghost Hunting,” directed by Raed Andoni — won best documentary at the Berlin Film Festival. Why was Moubarak arrested? Why was he released a year later? Those are questions I have learned, over the years, are useless to ask. Not because there isn’t an answer; actually, there is. Rather, because the answer isn’t related to anything specific that Moubarak, or anyone else, did.

The mistake is in searching for a reason, rather than a target. Abdallah Moubarak, Raed Andoni, Mohammed Khattab, Ramzi Maqdisi, Aatef Al-Akhras, Adnan Al-Hatab: these men and their friends, who we meet in this movie, were detained so that their spirit would break, so that every bud of resistance to occupation would be erased. Merely insisting on remembering that the human spirit is free is a crime, even while in reality the bodies and spirits of the Palestinians have been subjected to decades of oppression.

This insight isn’t explicitly and clearly expressed in “Ghost Hunting.” We also aren’t told that the movie, which interestingly and originally documents a fraction of the experiences of detained and imprisoned Palestinians in the occupation’s prisons and detentions centers, uses the prisoners as a parable for the Palestinian population as a whole. Don’t let the under-stated, quiet nature of the film fool you — it is a major contribution.

From the film “Ghost Hunting”:

Andoni, 50, born in Ramallah, was stopped, tortured, interrogated and detained for a year when he was 18. Now, in interviews, he returns to the fact that a fifth of the population of the West Bank and the Gaza Strip personally knows what it’s like to be detained or imprisoned by Israel. The end credits of the film dedicate it to Moubarak, to the 7,000 “security prisoners” in Israeli prisons today, and the 750,000 Palestinians who have passed through Israeli prisons and interrogation centers since 1967.

There isn’t a Palestinian family which doesn’t have a prisoner — and yet this disturbing statistic can be understood in an even larger sense. The Palestinians trapped under the occupation, even those who have never been locked up, are also prisoners.

“You need to sing”

The plot of the movie is deliberately loose. The entire film takes place inside the walls of a big loft in Ramallah, where Andoni asks his cast to create a replica of al-Moskobiya, the notorious detention center inside the Russian Compound in Jerusalem — its cells, guards, and interrogators — in order to shake off the ghosts that have been haunting him since he was detained there.

He recruited his actor-workers with a small newspaper ad. Mostly former detainees and prisoners, some of them were interrogated or tortured in that very same prison; others were held in other prisons and interrogation sites. During the process of re-enactment, we are exposed to restraints, isolation, humiliation, screams, a strange blend of Hebrew and Arabic, and moments of humanity here and there from one of the guards.

Abdullah Mubarak, who was recently released from administrative detention. In the background, Raed Andoni is pictured sitting with his head covered. From the film, “Ghost Hunting.”

Andoni and his friends are instructed in the re-creation process by Mohammed Khattab — Abu-Atta — after the opening scene in which he talks about the days of interrogation that he faced in al-Moskobiya: 19 days, of which seven consecutive days he was not allowed to sleep. The figure of Abu-Atta outlines the unique character of the movie as a whole: unannounced transitions between real and figurative, direct and indirect representations, first-person narration and dramatic re-enactments, actors and cartoon characters, a punch in the gut and a quiet gentleness.

Some of the scenes that hurt the most in the film are those that unite the real Abu-Atta, when he asks for precision in the details of torture and the behavior of torturers and tortured, with the person who plays his character, Ramzi Maqdisi, himself a former prisoner.

Calm, good-natured Abu-Atta suddenly loses his characteristic composure, screams at Maqdasi, hurts him. The re-enactment turns into reality, in an instant. But he says: “After every interrogation, if a prisoner remains strong he feels this trance pass through his entire body. The strength is here, here” — he points to his head, to his steadfast spirit. To emphasize this, he stops the filming for a moment and gives staging directions, creating one of the highlights of the film.

After Maqdasi, bound to a chair, is forced to pee his pants, the urine washes across the floor and the guards use the body of the bound prisoner as a rag. All the while, Maqdasi is laughing ostentatiously, defiantly, and Abu-Atta advises: at the end of the scene, when you’re soaked in piss, shaken like a rag and curled up on the floor, you must sing. The real Abu-Atta leans fondly over to Abu-Atta the character, and teaches him the song:

Ramzi Maqdisi on the floor of the prison, from the film “Ghost Hunting.”

A nation in trauma

Andoni’s previous film, “Fix Me,” was released in 2009. Andoni tried to trace the origins of a headache that refused to be cured. With the devoted and artful care of his psychotherapist, he succeeded in drawing important boundaries, but also in understanding their fragility: between Andoni and those surrounding him, between the personal and the political, the impetuous and the steady, between stubbornness and fulfillment, and also between what has a reason and what simply cannot be explained.

In “Ghost Hunting,” Andoni returns to this dualistic movement, which revolves entirely around the close connection between the body and mind: when they are tortured, when they are healthy, when they complete one another and when they are in opposition. Ambivalence emerges as a hallmark of the two movies. Andoni asks us to consider a complicated picture of life, a picture that doesn’t point to an easy solution. He aims to draw it in gentle notes, and his success is in the deep distress of this film’s audiences.

The prisoners’ spirits remain steadfast, and they sing, joke and laugh, mocking their guards and dancing to spite them, but they are also incredibly fragile. Throughout the film, several of the actors ask to take a break or leave when they are flooded with tears. In recreating the mechanisms of detention, the padded cell, which is intended for those whose spirits have been broken — those who can no longer stand the torture — is not forgotten. We hear a close and chilling testimony about somebody who has undergone that process. All of a sudden, cheerful fraternity is replaced with a sense of deep isolation that has no cure.

In the end, Andoni’s attempt to release himself from the trauma of his detention in Moskovia — like in “Headache” — isn’t a clear success. Yet he also does not fail. The movie ends in an optimistic and joyful tone, at the wedding of one of the actor-prisoners and the visit of the others’ children to the re-created structure. Suddenly, the shackles turn into an amusing game, and their childlike questions sterilize the wounds.

Then Lena Khattab, the daughter of Abu-Atta, joins the visit, describing the cell where she was held in HaSharon Prison. Lena is a dancer and a student at Birzeit University, who was detained in late 2014 during a demonstration in support of the prisoners. She was convicted of throwing stones at soldiers and participating in an illegal demonstration. The only evidence against her was the coordinated testimony of three soldiers. The punishment given to Lena was six months in prison — and in the film she describes her torn clothes and the coldness of her cell.

I remember well the day of her release: her attractive figure released into the arms of her family, and among them of course was her father, Abu-Atta. And so, her appearance in the film brings me back to the start of things: imprisonment passes from generation to generation, from inside prison to the outside, and it is designed simply to break the spirit of resisters, in order to impose trauma on an entire nation. Occupation is terror.

Anat Matar is a senior lecturer in philosophy at the University of Tel Aviv, and a member of the Israeli Committee for Palestinian Prisoners. This post was originally published in Hebrew on Local Call. Read it here.

Get Our Weekly Newsletter
Before you go…
A lot of work goes into creating articles like the one you just read. +972 Magazine is nonprofit journalism, owned by many of our writers, editors, and journalists. In order to safeguard that independent voice, we are proud to count you, our readers, as our most important supporters. With your support, we can keep +972 Magazine a strong, independent, and sustainable force helping push the global discourse on Israel/Palestine.
DONATE
More About anat matar 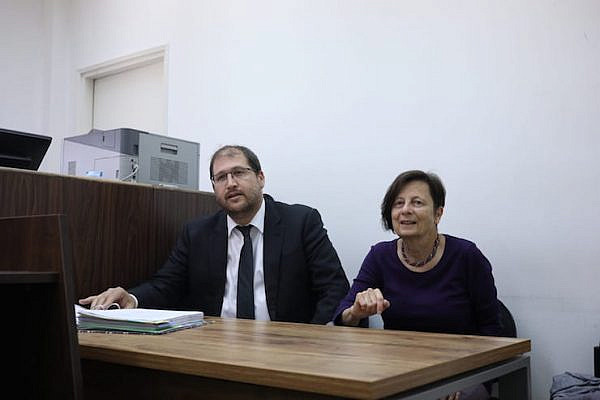 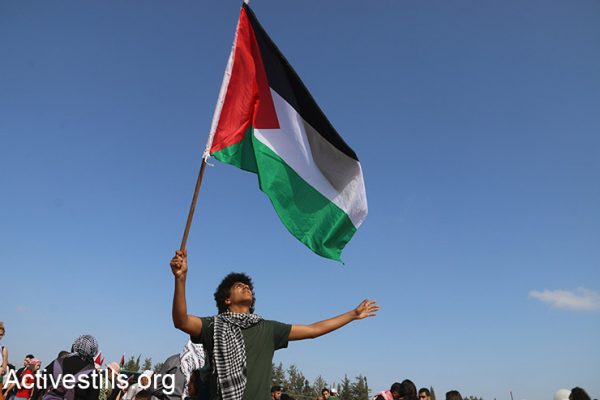 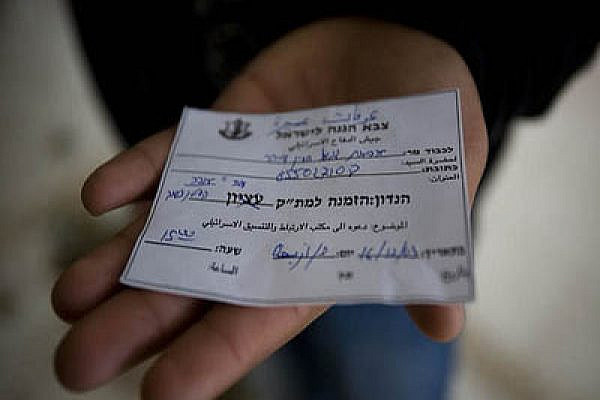 New book explores Israel’s military legal system
The Israeli military legal system  is one of the most under reported yet crucial components of Israel’s system of control over Palestinians in the occupied West Bank. Since 1967, Israel has controlled the entire area of the West Bank using two forms of legal enforcement based on two different legal codes –  one for Israeli…
By Joseph Dana September 6, 2011