True reconciliation can only begin once we acknowledge past injustices. And there’s a lot to own up to. 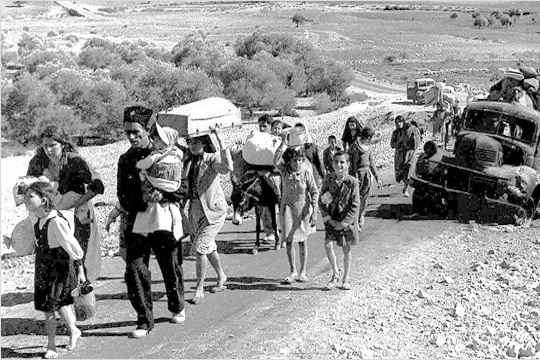 One of the villages that was erased during that ethnic cleansing was al-Sindiyana, a lively village that stood on a hilltop on the southern edge of the Carmel Mountain. Proof of its existence goes back to the 18th century, and the village appears in the maps and reports of many researchers and tourists from the 19th century and in the first half of the 20th century, including Ottoman and British land registries that list the number of village houses, the different types of agriculture grown there, and details about its residents.

Named after the oak trees that surround it, al-Sindiyana was ethnically cleansed in 1948 by the Irgun (Etzel) and Lehi (Stern Gang) militias. Its residents were expelled, some of them were murdered, and the dozens of homes left abandoned were blown up. Today, only the stones that were once part of those homes lay strewn across the field. 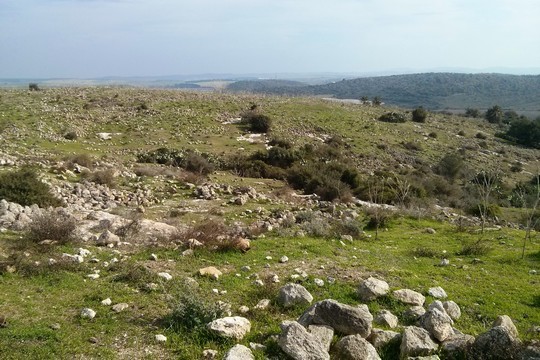 Decades after the ethnic cleansing of al-Sindiyana, all that remains are stones scattered on the Carmel mountainside. (Noam Rotem)

Like in many other Palestinian villages, al-Sindiyana’s residents had good relations with their Jewish neighbors. The Miqbel family, for instance, cooperated with the residents of Zichron Ya’akov, and more than once prevented Palestinians from attacking them and their property. When Sabri Hamed, a local gang leader, came to uproot Zichron Ya’akov’s vineyards, members of the Miqbel family convinced him to refrain from doing so. When they refused to compensate him for his “losses” incurred by not raiding the vineyards, Hamed murdered Sheikh Miqbel, his wife, and two of his children. Even when a group of Arab irregulars reached Sabbarin, the Palestinian village adjacent to al-Sindiyana (which was also ethnically cleansed in 1948), the residents demanded the militia leave, as the former wanted to surrender to the Jews.

‘We sent them away’

None of that helped the residents. On May 13, 1948, HaMashkif, a newspaper owned by the Revisionist movement, wrote that “the cleansing of the Efraim Mountains continues”:

As the soldiers approached, the village was rocked by heavy mortar fire, and wave after wave of foot soldiers attacked the enemy. This powerful attack broke the enemy’s resistance, prompting the flight of frightened Arabs toward the Triangle area.

The commander of one of the platoons, Moshe Nir (Wagner), who was known by his nom de guerre, Nachson, provided a testimony to the Irgun archives nine years after the expulsion:

The platoon drew closer to Sindiyana and conquered the village without any loss of life on the attacker side. The platoon was not able to enter into battle with the enemy, since the Arabs fled and abandoned the village, aside from the mukhtar who remained in the village with his family and raised a white flag above his home.

According to Nir, in Sabbarin there was “a great panic…and a massive fleeing of the residents. Then the armored vehicle began following those who fled while firing at them.”

It turns out, however, that not everybody fled. Nir continued:

We built an enclosure where we put all the elderly, women, and children who were not able to flee… their numbers reached over 100. After a number of days… we sent them away with accompaniment in the direction of Umm al-Fahm, in order to ensure that they do not remain in the area or attempt to return to the villages.

Later on Nir describes how during a search of the column of refugees, a pistol and a rifle were found. Seven men were detained and were asked who the weapons belonged to. After they refused to answer, the Etzel men threatened them with death. After still refusing to answer, the soldiers carried out a “field court martial,” sentenced the seven to death, and thereafter executed them on the spot.

Another commander from one of the Irgun platoons involved in ethnically cleansing al-Sindiyana and Sabbarin was Amitai (his last name is not listed in the Irgun archives), who was known as “Mike.” Amitai confirms Nir’s testimony, adding several details of his own:

While the preparations for the operation were done clandestinely, when we arrived at Sindiyana it became clear (due to a small fortification) that a resident of Binyamina (and we suspect it was Leibovitch) convinced most of the village residents to surrender without gunfire.

Amitai continues and describes a “case of one man who looted and acted unkindly with the Arab women. That same soldier was put on trial and was recommended to be lashed, but that was never implemented.”

This is real ethnic cleansing. The “ethnic cleansing” Netanyahu imagines — the removal of trespassing, privileged settlers who came with the purpose of stealing land that does not belong to them, and living as lords of the land at the expense of millions of Palestinians — cannot be compared to the ethnic cleansing Israel committed in 1948. This ethnic cleansing continues today in Umm al-Hiran, in dozens of other villages in the Negev, the Jordan Valley, and east of Jerusalem. Netanyahu’s worldview, according to which the Jew is always the victim, is the basis for his foolish comments.

I happened upon the stories of al-Sindiyana and Sabbarin by chance. The more I researched their history and the story of their destruction — and the later attempts to cover up these crimes — the more I became convinced that until we talk about them, until Israel takes responsibility for these grave injustices, there will be neither justice nor peace.

Israel is responsible for large-scale ethnic cleansing, which millions of people still experience — many of them in refugee camps. Netanyahu’s remarks must spur a conversation about the real ethnic cleansing that took place and continues to take place here, under the prime minister’s watch. Reconciliation can only begin by recognizing injustice — until this happens Israelis will continue to bask in the image of the victim, while the real victims of this injustice continue to suffer.