Netanyahu is most likely to form his next government around the religious and the secular middle class, represented by election victors Naftali Bennett and Yair Lapid. The coalition will concentrate on domestic reform and will only strengthen the status quo on the Palestinian issue. Also: Did Israelis really move left? Seven takeaways from the elections. 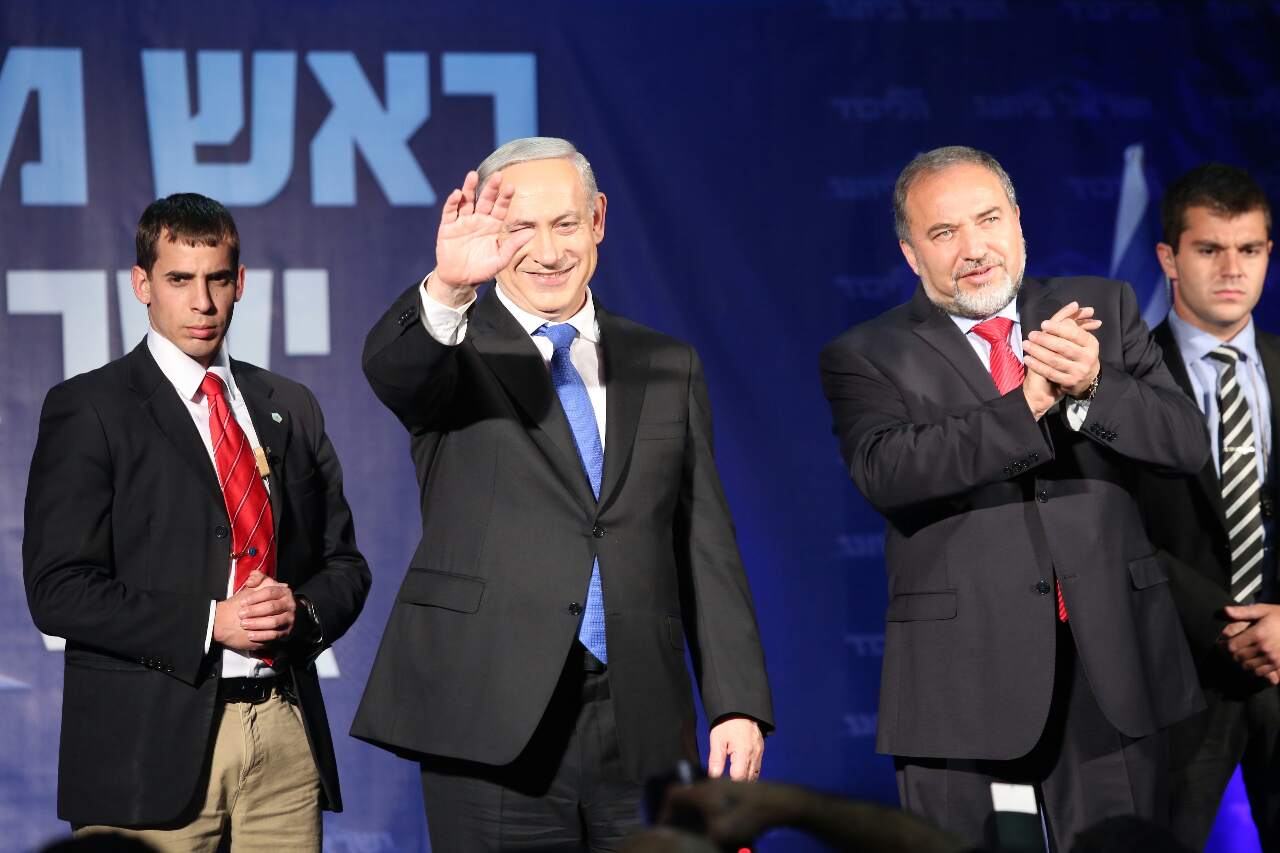 1. The future government
At the time of writing, Prime Minister Benjamin Netanyahu’s base of Orthodox and right-wing parties has 60 Knesset seats – the same as the potential opposition. Estimates are that the Jewish Home party will finish with another seat at the expense of the United Arab List once the soldiers’ votes are counted, pushing the Right over the Knesset’s halfway mark. This is not a major change, since it’s pretty clear that Netanyahu will form the next government with Yair Lapid – the biggest winner of the night – and probably Kadima. The three parties have 52 seats combined and with Naftali Bennet’s Jewish home party, they could reach 63-64 seats, which means a stable government. Other parties that might join the government, like Shas or Tzipi Livni, will do so on the terms of the senior coalition partners.

This combination makes sense because Lapid, Bennet and Netanyahu share the same ideology on social and economic issues, and have the same indifference to the Palestinian issue (with some nuances). Bennett will have the support of Likud hawks, while Lapid will take over the role of handling the Right’s contacts with the world, as Ehud Barak and Shimon Peres did for the previous Netanyahu government. Lapid spoke at the last AIPAC conference and enjoys nice relations with some of Israel’s allies in Washington, while for them his presence in the government will serve as proof that Netanyahu has indeed “moderated.”

The next government will try to reach a new consensus on issues of military draft reform and perhaps the heavy tax burden on the middle class – these are the issues that Lapid is most identified with and Netanyahu and Bennett will only be too happy to respond. 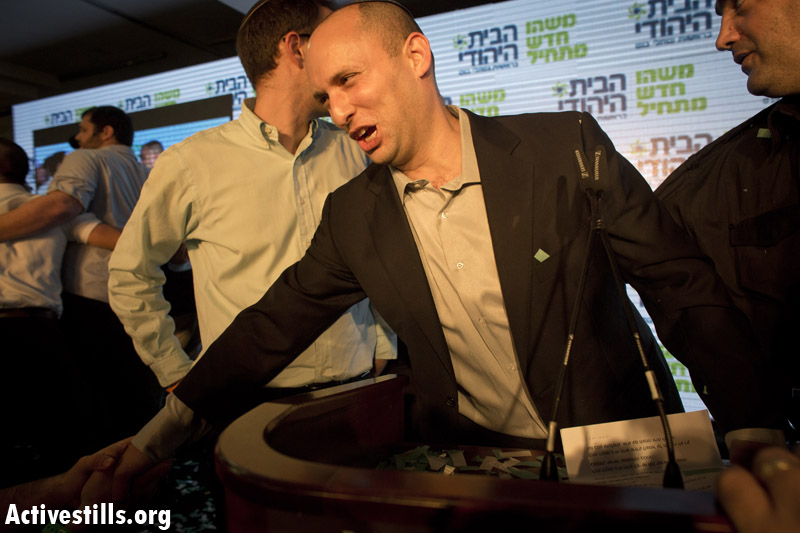 2. The hard-Right and the settlers
So much attention was given before the elections to the rise of Naftali Bennett’s Jewish Home party and the increased representation of the settlers in the next Knesset that even his supporters were disappointed with the 11 seats they got (as I said, they are likely to end up with 12). But make no mistake, this was a relatively good night for the settlers. The next Knesset will have a record number of around 40 religious Jewish Knesset members (including 19 in the Orthodox parties) – many of them settlers or supporters of the settler movement. Since they will be part of the government, and since they tend to operate as one coherent bloc, they are likely to have major effect on issues involving appointments of government officials and on Israeli policies in the West Bank (I have written more about the rise of the settlers to the position of the new elite here). Unless Netanyahu leaves Bennett outside the government – an unlikely prospect – he won’t be able to pursue a diplomatic solution even if he wanted to, and everything he has ever done suggests that is the last thing he wants.

On the Palestinian issue, the next Knesset will not be very different from the previous one. Lapid himself declared before the elections that he opposes a territorial compromise on Jerusalem. He also refuses to form any sort of ad-hoc union with the Left or the Arab parties, which is necessary for any political path that could end the occupation. If you thought Netanyahu perferred confrontational speeches and a lot of hot air to bold action, wait until you see Lapid. After all, the guy is a talk-show host.

3. The ethnic vote
A Netanyahu-Bennett-Lapid coalition will be the most “white” Israel has ever had, for lack of a better word. The almost total absence of Sephardi Jews in those parties is quite shocking, and deserves deeper examination.

In fact, these were the most “ethnic” elections I remember, and it seems that each ethnic group or sub-group had its own party, with the clearest division being between Arabs and Jews, of course, but also within those groups. With the risk of tremendous generalization, I would say that poor Sephardi Jews voted Shas and those with higher income Likud; Ashkenzi national-religious went with Bennett; Secular Ashkenazi voted for Meretz, Livni and Lapid and so on.

Except maybe for Labor and Likud – the old forces which still have some coalitions between them – it seems that the entire system is determined by the interaction of two variables: ethnicity and economic status. The party lists reflect that fact, despite the occasional variations, which could be explained by the need to project a more inclusive image. Lapid’s novelty and the deeper reasons for his success is the understanding that the Ashkenazi upper-middle class now views itself as another sector that needs to compete for more benefits, rather than as the elite in charge of the entire society.

The effect of ethnicity and its interaction with class, especially among Jews, is the most denied element in Israeli popular discourse, because it runs contrary to the image or myth of the Zionist melting pot, and it certainly contradicts the image of a state which treats all citizens – Jews and non-Jews – equally, although that was always more of a comfortable self-perception than something you could seriously defend. Again, these issues deserve closer examination, which I will try to get to sometime soon. 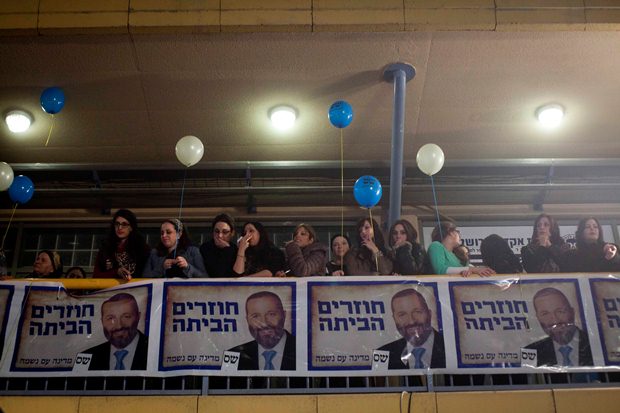 Supporters of Shas at the women section during the party’s event on election night, January 22 2013 (photo: Tali Mayer)

4. Iran
Returning to politics: if you want to know how weak Netanyahu got, just remember that out of the Likud’s 31 MKs, 11 belong to Avigdor Lieberman’s Israel Beitenu list, which at least according to Lieberman is still a separate party. If the ambitious Lieberman decides one day to resume his independence – maybe after his trial – Netanyahu will be left with an average Knesset faction, and at least half of his MKs will be hawks and settlers who could desert at any moment. The most important outcome of Netanyahu’s weakness is  a further-reduced chance of an Israeli attack on Iran – and looming cuts in the security budget will work in that direction too.

5. Shift to the left?
Since the elections were called we posted every public poll on our Knesset Poll Tracker page and not a single one predicted Netanyahu’s bloc dropping to 60 Knesset members (one or two polls gave him 61, but not in the weeks leading up to the elections). The previous Knesset had the Right-Orthodox with 65 seats, and the poll average we posted gave the Right 66 seats.

The actual results are a swing of 3-6 seats to the left within the Jewish public, starting from the Likud (plus some changes within the Right). The Likud, Lieberman and the national religious had 49 seats in the previous Knesset – they now have 42-43; the Center (Kadima + Labor) had 41, and the new Center (Lapid + Kadima + Livni + Labor) has 42; the Left (Meretz) had 3 and now has 6, and right now the non-Zionist parties have an additional seat, although they are likely to lose it.

I would speculate that the gradual migration of Jewish voters to the Right that has taken place since 1996 seems to have stopped, and might have even ended. Yet we are still talking small numbers and a long-term process, so don’t expect new policies immediately. I still stand by my view that the Israeli public and the Israeli political system cannot, under the current circumstances, come up with a solution that would end the occupation, not to mention solve the deeper fundamental issues of the conflict.

6. No shared politics for Arabs and Jews
The shift to the left didn’t result in a Jewish readiness to support shared platforms with Palestinians. Personally, this is the most heartbreaking element of politics here (in my polling station only seven votes were cast for Arab-Jewish parties, two of them from my own house. The legalization party, for example, got six votes). 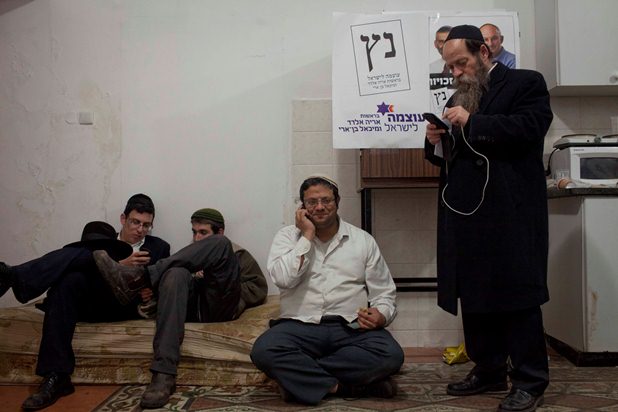 7. A positive note
Part of the “success” of the Center-Left was pure luck. While two small opposition factions – Kadima and Balad – passed the Knesset threshold (the latter actually gaining some 11,000 votes since 2009), the extreme-right Otzma LeYisrael party, headed by Michael Ben-Ari and Aryeh Eldad will probably be left out of the Knesset, “burning” two seats that would have gone to the Right.

This is perhaps the happiest turn of event in these elections. There are racists and there are racists, and Otzma was the worst kind. In the tradition of the JDL and Kahane groups – not surprising, considering the fact that most Kahane people ended up in Otzma after their party was outlawed – Otzma’s members used to go to the most sensitive areas of conflict and try to fan the flames. They marched in Palestinian towns chanting racist slogans, and they spent days in south Tel Aviv demonizing and inciting against asylum seekers. MK Ben-Ari played a central role in the incitement that led to the attacks on asylum seekers in south Tel Aviv’s Hatikva neighborhood last spring. It won him a lot of media attention and also support – or so it seemed.

Before the polls opened, Ben Ari posted on his Facebook page a video showing him and other known Hebron settlers visiting Rabbi Kahane’s grave; it didn’t help. While the Arab members of Knesset Ben Ari hated entered the parliament with a comfortable margin, Kahane’s heirs were left out.