The far-right Agazian movement seeks to establish a Tigrinyan Orthodox-Christian state in what is now Eritrea and part of Ethiopia. Its anti-Muslim, militant politics are deepening the divisions within the already fractious Eritrean opposition. 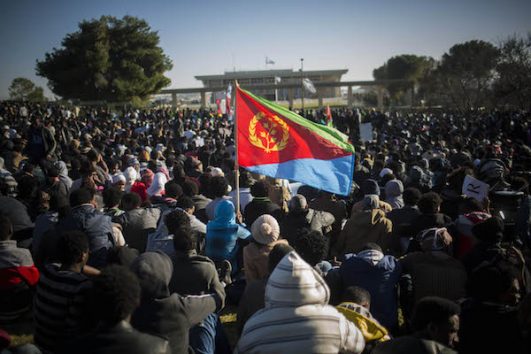 The Eritrean flag flies during a protest outside the Israeli parliament in Jerusalem on January 08, 2014. (Yonatan Sindel/Flash90)

About two years ago, an extremist, far-right movement began operating on the Eritrean political scene. The movement, broadly called Agazian (speakers of the Ge’ez language) emerged from within the Tigrinyan, Orthodox-Christian opposition in the diaspora. The movement is active in several different locales — in Europe, Ethiopia and Israel — and particularly on social media, contributing to the radicalization and intensification of political discourse in the Eritrean community around the world.

The Agazian movement is still a minority within the Eritrean diaspora. Like many right-wing extremist movements elsewhere, their supporters may not be especially numerous, but their vocal and even violent nature makes them potentially influential.

As opposition activists, the Agazians reject the dictatorial Afwerki and PFDJ party regime that has ruled Eritrea since it became independent in 1993. However, the Agazian movement’s goal is the creation of a new, Agazian, Orthodox-Christian state. Part of the movement’s vision is to unify Eritrea with the Tigray region in Ethiopia (Eritrea’s longtime enemy), which is home to Tigrinya-speakers across the border. The Agazian nationalist movement’s terminology and modus operandi is enabling a racist and anti-Muslim public discussion, influenced by trends in the West and Israel, to take root in Eritrean politics.

The Agazian movement is comprised of several different groups, united largely by a set of shared characteristics. The nationalism propagated by movement activists is based on a belief in the ethnic and religious supremacy of Orthodox Christian Tigrinya-speakers. They find the basis for this identity in the ancient Ge’ez language, once spoken by the Habesha peoples of the Horn of Africa, which later split into Tigray-Tigrinya, Tigre, Amhara, and other, smaller ethno-linguistic groups found today in Eritrea and Ethiopia.

The Tigrinyas are the largest ethnic group in Eritrea; the majority of them are Christians, mainly Orthodox, while a minority are Muslims. In Ethiopia, they are referred to as Tigrayans and are a relatively dominant political group, though they comprise only six percent of the general Ethiopian population. 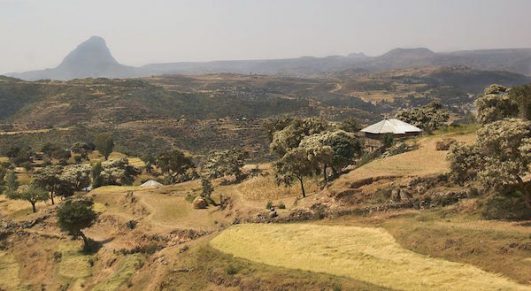 The Agazian movement selectively draws on cultural, linguistic, and religious elements. The historical narrative it promotes offers a distorted interpretation of the demographic, political, and religious transformations that made the region of Ethiopia and Eritrea what it is today. For example, the movement erases the complex history of Islam in the region and ignores the fact that Muslims from all the different ethnic groups comprise roughly half of Eritrea’s population. According to the Agazian movement, the Tigrinya-speakers who are Orthodox-Christians are the region’s indigenous population; virtually all others are considered to be foreign migrants.

The Agazians are defined not only by the shared identity they claim, but also by a shared enemy — anyone who is not Tirginyan and Orthodox-Christian, and particularly all Muslims. The public statements made by members of the movement often include racist expressions and hate speech toward groups excluded from their nationalist vision. Additionally, Agazian nationalists often denounce the majority of Christian Tigrinya-speakers who oppose their politics and prefer unity above ethnic and religious division as “leftist traitors”.

The movement’s founding and subsequent momentum can be placed in a broader context. It is clear that the Agazian movement has found refuge and a political home in Western, right-wing anti-Muslim ideology and its rejection of values such as multiculturalism and universalism. As refugees who fled the dictatorial regime in Eritrea, the movement’s members claim to be aiming to establish a democratic state; however, the movement has clear fascist tendencies and promotes a range of anti-democratic measures.

The movement also devotes considerable attention to Jews, Zionism, and Israel. The Agazians emphasize the Jewish elements of their religion and stress the similarity between the Zionist vision of establishing the State of Israel and their own vision of establishing an Agazian (Tigrinya Orthodox Christian) state. They consider the establishment of an Agazian state as a historic right, denied to them by their enemies. The movement is also attempting to enlist help from Israel and Jewish groups to achieve their goals.

The Agazian movement’s rise must also be situated against the ideological backdrop of the dictatorial Eritrean regime. Since the years of its prolonged struggle for independence from Ethiopia (1961-1991) and especially after independence, Eritrea’s ruling party, which emerged from the main rebel movement EPLF, has promoted a policy of separation of religion and ethnicity from matters of politics and the state. Strict state regulations allow the practice of four religions: Orthodox Christianity, Catholicism, Protestant Christianity, and Sunni Islam. The state also officially recognizes nine ethnic groups: the Tigrinya, Tigre, Bilen, Saho, Beja, Afar, Nara, Kunama, and Rashaida. Any deviation, real or perceived, from these regulations, and any attempt to harness religion or ethnicity for political goals, are considered threats to the regime and suppressed.

Eritrea’s official ideology is a kind of multiculturalism forcibly inculcated in the country’s populace by means of a propaganda apparatus, yet it is an important value among many Eritreans in Eritrea as well as in the diaspora — including among refugees and opposition movements. In practice, though, Tigrinya is the dominant language in Eritrea, and among the four authorized religious groups, the regime is more likely to suspect Muslims of opposition activities and to take action against them. In spite of this, the Agazian movement claims that the status of Tigrinyas is being eroded and that they are victims of ethnic cleansing in Eritrea.

Different groups have challenged the state’s ethnic and religious regulations since Eritrea’s independence. On the Christian side, these groups have included members of banned religious streams, such as Pentecostal Christians and Jehovah’s Witnesses, who are persecuted by the regime. On the Muslim side, the Tigrinya-speaking Muslims, known as the Jeberti, claim to be a separate ethnic group and are demanding official recognition. Members of these groups tend to oppose the regime, and many do so, mainly from the diaspora. However, unlike the Agazian movement, they do not oppose the idea of an Eritrean state, and are working for change within the existing territorial framework.

Agazian nationalists are distinct from other groups that combine ethnic or religious identity with opposition to the Eritrean regime. The Agazian movement sees the long-established Eritrean nationalism as fake and is working to undermine its existence and principles. With the stated goal of unifying with the Ethiopian Tigray region and its people, they stress that Eritrea’s existing territorial boundaries are a colonialist creation and argue they should be dismantled.

At the same time, however, the Agazian movement serves the regime. The movement’s activities on the internet and social media are deepening the internal divisions within the Eritrean opposition — already complex in nature — making it more difficult to form a joint front against the regime. By labeling its opponents “extreme leftists,” the Agazian movement is forcing Eritreans to deal with the question of this political identity; it is imposing an extremist right-wing political discourse into a space where left/right distinctions have been largely absent. If the movement grows and gains more support, it seems that Eritrean opposition activists will be compelled to choose for the first time which side of the global political map they belong to.

Inbal Ben Yehuda is a blogger for Local Call and a research fellow at the Forum for Regional Thinking, where this article originally appeared in Hebrew. Read it here.