Now that the entire Israeli public is listening, it’s time to open up the conversation 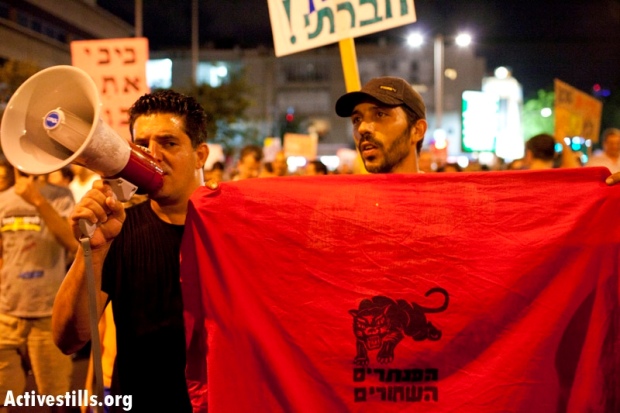 Many people have rightly pointed out that the J14 protests, which mobilized Israelis to the country’s largest ever demonstration yesterday, refrains from dealing with questions regarding the status of Palestinians under Israeli control – issues such as equality under the law, access to resources and most notably, the occupation.

While I agree with those calls, I think they are missing some of the opportunities this movement presents. I was planning to write an article on these issues, but then saw that Palestinian activist Abir Kopty did a much better job than I could hope to do in dealing with these questions. Kopty describes her feelings following the time she spent at Tent 1948, a small Jewish-Palestinian compound at the heart of the Rothschild tent camp:

The existence of Tent 1948 in the encampment constitutes a challenge to people taking part in the July 14 movement. In the first few days, the tent was attacked by group of rightwing activists, who beat activists in the tent and broke down the Palestinian flag of the tent. Some of the leaders of the July 14 movement have said clearly that raising core issues related to Palestinian community in Israel or the occupation will make the struggle “lose momentum”. They often said the struggle is social, not political, as if there was a difference. They are afraid of losing supporters if they make Palestinian issues bold.

The truth is that this is the truth.

The truth is, this is exactly what might help Netanyahu, if he presses the button of fear, recreates the ‘enemy’ and reproduce the ‘security threat’, he might be able to silence this movement. The problem is not with Netanyahu, he is not the first Israeli leader to rely on this. The main problem is that Israelis are not ready yet to see beyond the walls surrounding them.

Yet, one has to admit, something is happening, Israelis are awakening. There is a process; people are coming together, discussing issues. The General Assembly of the encampment decided on Friday that it will not accept any racist messages among its participants. Even to Tent 1948 many Israelis arrived, read the flyers, listened to what Tent 1948 represent and discussed calmly. Perhaps if I was a Jewish Israeli I will be proud of the July 14 movement. But, I am not a Jew, I am not Zionist, I am Palestinian.

Well, I am a Jew, and I share Abir Kopty’s call for Israelis to take the opportunity of the July 14 movement not just to speak of market economy and social welfare, but to examine the entire nature of the social order in this country – and with it, the relation between Jews and Arabs.

When I visited the tent camp at Rothschild Boulevard I saw people examining the signs and reading the leaflets around tent 1948. I heard that after the rally last night a group of Hassidic Jews stopped there. At the same time, “equality tent” was built at the site of the camp that some extreme rightwing settlers tried to built, before being forced out by leftwing protesters [UPDATE: I just came back from the tents, the settlers are back, and there are constant verbal confrontations and even a bit of pushing and shoving between them and other protesters] . One should also note that among the speakers in the Tel Aviv rally was Palestinian author Udah Basharat, who spoke of land confiscation & discrimination, and mentioned the ongoing campaign against the village El-Araqib.

The J14 movement can go many ways – it can even bring Israel further to the right; it certainly won’t be the first time in history in which social unrest led to the rise of rightwing demagoguery – but right now, it is creating a space for a new conversation. Limited as this space may be, it’s so much more than we had just a month ago.