A nearly averted shootout outside Abbas’s house in Ramallah has led to renewed talks about restoring Palestinian autonomy in parts of the West Bank. But outside the framework of a peace process, such steps only help the occupation endure. 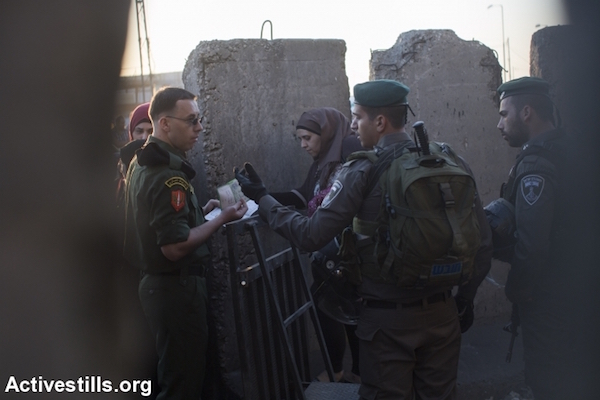 Israeli and Palestinian security forces came dangerously close to a direct, armed confrontation in late December 2015. An Israeli army unit was on a routine nighttime incursion into Ramallah, deep into Palestinian-controlled territory, when it found itself face to face with armed members of the American-trained Palestinian Presidential Guard.

Either the Israeli military’s mapping software didn’t include the security cordon around Mahmoud Abbas’s official residence, or the officer responsible for planning the mission that night thought the Presidential Guard would simply stand aside and let them drive right up to the Palestinian president’s home, or right by it — it doesn’t really matter.

The Presidential Guard troops did not stand down. They refused to let the Israeli army arrest squad enter the sterile space surrounding Abbas’s house, and after 15 very tense minutes, the Israeli troops turned eventually around. What could have been a serious crisis was closely averted, but the message, intentional or not, was clear.

“They ordered Abu Mazen’s guards to disappear,” PLO Secretary General Saeb Erekat said at the time to Defense News, which broke the story. “They were practically in his garden, approaching his house just to tell him ‘We’re here.’ As if he needs to be reminded. Personally, I don’t know why Abu Mazen is taking all of this. I honestly don’t know.”

The idea of Israeli troops closing in on the home of the PLO chairman and Palestinian president surely evoked memories of when Israel sent tanks to put Yasser Arafat under siege at his presidential compound, the Muqata’a, at the height of the Second Intifada. That incursion, which came amid the most violent period in years, signaled an end to whatever dreams of Palestinian autonomy the Oslo Accords had promised. 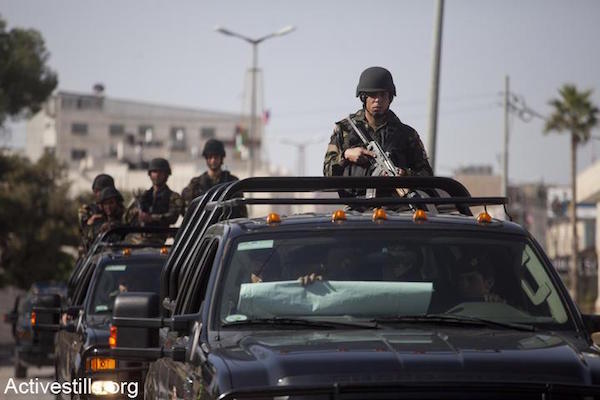 Members of the Palestinian Presidential Guard in a motorcade in Bethlehem, March 22, 2013. (Oren Ziv/Activestills.org)

Twenty-one years ago, Israel and the Palestinian Liberation Organization signed the Oslo II agreement, which divided the West Bank into three areas: A, B and C. Israel was to retain full administrative and security control in Area C, over 60 percent of the West Bank where most Israeli settlements are located. In Area B Israel would maintain security control but the Palestinian Authority would handle administrative matters. Non-contiguous Palestinian cities comprised Area A, where the nascent PA would essentially handle all functions of local government, including security.

Once that autonomy was violated during the Second Intifada it never returned. Since the early 2000s Israeli troops have dispatched armed incursions into Palestinian cities whenever they please. The “security cooperation” envisioned in Oslo II, whereby Palestinians would act on Israeli intelligence, has largely cut the Palestinian intelligence and security agencies out of the picture. Security cooperation became a euphemism for Israeli troops calling ahead to let Palestinian police know they are coming in — to ensure the Palestinians stay out of their way.

“Area A doesn’t exist anymore,” a senior Palestinian security officer told Defense News after the December incident outside Abbas’s home. “The Israelis can invade anytime. It’s an open area for Israeli invasion, despite the internationally recognized fact that this area is supposed to be under the full control of the PA.” 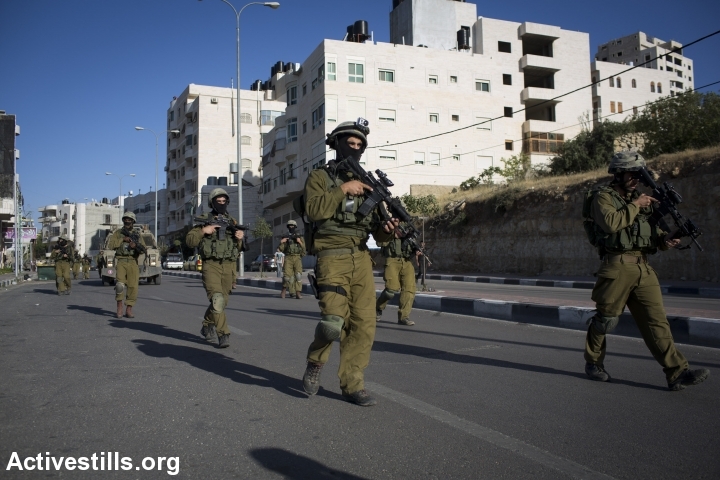 To be clear, Palestinian security forces do cooperate fully with the requests of their Israeli counterparts but the Israelis long ago revoked the autonomy they were supposed to receive in return. Without that ongoing cooperation the occupation would be much less tenable for Israel; it would be forced to re-occupy Palestinian cities and re-assume the responsibility for directly managing the lives of millions of Palestinians. Israel is also worried about what might happen if the 40,000 EU and American-trained Palestinian security forces ever turned their weapons on Israel.

Israeli Prime Minister Benjamin Netanyahu sent an official apology to the Palestinian president over the army incursion outside his home.

Abbas says that after the confrontation with his Presidential Guard he reached out to Netanyahu and tried to arrange a meeting to discuss the future of security coordination. Netanyahu rejected his overtures, Abbas told Israel’s Channel 2 last week, but the story did not end there.

In early 2016 representatives of both sides began a series of meetings to discuss restoring PA security control of Palestinian cities in Area A, according to a report in Haaretz. The Palestinians were demanding a return to the situation spelled out in the Oslo Accords. Israel reportedly agreed to most of the Palestinian demands in principle, but insisted on asserting its sovereignty over all of Palestine in exchange for granting limited autonomy in a handful of cities.

In an earlier round of talks, Benjamin Netanyahu himself reportedly demanded that in exchange for limiting IDF operations in Area A, that the Palestinians recognize Israel’s right to violate said autonomy of Area A. In later rounds, according to a Haaretz report published Wednesday, Israel agreed to stop violating Palestinian autonomy in Ramallah and Jericho but not in other cities — it wants take a gradual approach. The Palestinians, of course, rejected both conditions.

The two sides will reach an agreement sooner or later; it is in both parties’ interest to do so. Israel will likely fold first because at the end of the day Netanyahu doesn’t really care whether or not the Palestinians agree to Israeli sovereignty over Palestinian cities, or even the West Bank as a whole. The Israeli prime minister knows very well that just as he has been able to blatantly ignore and violate old agreements, he can also trample any new agreement without consequence.

A new agreement on security coordination, however, only restores the situation as it was defined by the Oslo Accords 20 years ago. Only this time it will not be part of a temporary framework meant to advance the peace process. That means that whatever comes next is not meant to improve the situation but rather to stabilize it; and strengthening and stabilizing the occupation will not bring us any closer to ending it.