Could the upcoming elections bridge the gap between Israeli Jews and Arabs? Lebanese human rights lawyer Chibli Mallat says that contrary to popular belief, there are more possibilities for cooperation than one might think. 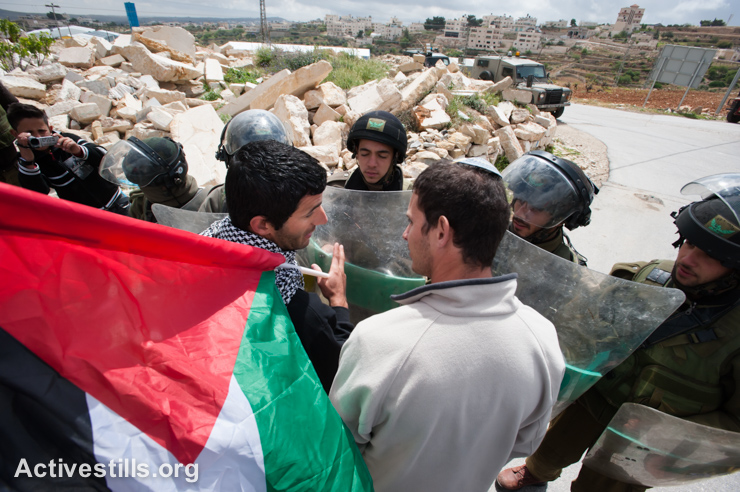 A Palestinian and a Jewish Israeli activist confront Israeli soldiers during a weekly demonstration against the Israeli occupation and Separation Wall in the West Bank village of Al Ma’sara, April 5, 2013. The Wall, if built as planned, would cut off the village from its agricultural lands.

The death of Palestinian Authority Settlement Minister Ziad Abu Ein serves as another reminder of the senseless deadlock in Israel-Palestine. We all mourn the loss of an advocate of nonviolence who joined the universal call to breathe. Something must give. History might predict another bout of violence, but the Israeli elections on March 17 might create a different, more positive opportunity. This is how:

The political scene in Israel is in disarray. In part this is due to bickering among the ruling elite over positions, and a particularly mercurial prime minister, but it comes mostly from a loss of compass. Two narratives are in competition. The traditional separation of 1948 territory into two states alongside the 1967 borders is giving way to a one-state discourse introduced by Zionist leaders, mostly from the Right, designed to avoid giving up any territory. The Palestinian scene is also divided. The mantra remains for a “sovereign Palestine in Gaza and the West Bank, with Jerusalem for capital.” But the temptation is strong for one-state advocacy, which before 1967 was the main plank of the then emerging Palestinian Liberation Organization.

In the resulting confusion, possibilities are unexpectedly opening up. For now, the Jewish ruling elite rejects any coalition with the 20 percent of “Palestinians in Israel,” as they like to call themselves. These “Arab Israelis” are wary themselves of any such arrangement. Traditionally, the fear factors on the Jewish side, and the diffident atmosphere on the Palestinian side, have both undermined such an opening. But the reality is that a Jewish/non-Jewish coalition, formal or informal, would create an unprecedented tsunami on Israel’s political scene. A committed mobilization of the Palestinian-Arab vote can yield up to 24 members of the Knesset to a coalition, if it makes full use of the proportional system.

There is no pre-ordained conclusion in politics, and the Israeli scene is in such turmoil that the possibility has opened up for radical innovation on the basis of equality and human rights.

Skeptics will argue against the idea, saying a grand-scale Arab-Jewish coalition is impossible because it cannot agree on a clear objective — both in ideology and in practice. This is where the discombobulated compass may suddenly align the stars. The battle between the one-staters and the two-staters has become moot: the question is of basic, human-rights conviviality under either scheme, since the reality of the settlements has thrown the map out of joints forever. We have all come to realize that the chess deck is disappearing under the old pawns of the Middle East. Inside Israel-Palestine, and all around, fate has served our uncompromising imagination with events unseen since 1948. Extremism rules the day, threatening to swallow any remaining decency; people are increasingly intertwined, while sectarian edges harden across the region. The map we are familiar with is shifting, and we are spewed out as so many wrecks on the rough sea.

How does one get to an informal — or better yet — a formal coalition? Well, as a first step we must knock at each other’s door. This article is one such, minor knock. But if Tzipi Livni or Isaac Herzog were to knock on Haneen Zoabi or Ahmad Tibi’s door, or vice-versa, with a view to form some sort of humanist understanding of the future, the chess deck might suddenly brighten up with new trajectories. The sea would look less rough overnight. The knock could also be encouraged by President Mahmoud Abbas — or by the Europeans. It could come from American Jews. Ultimately, however, those voting in Israel’s March elections decide, so the onus is primarily on them.

There are more possibilities for cooperation than one would think. In the face of the rise of the BDS movement, the increasingly frequent frowns of the U.S. executive branch and the legal sword hovering over Israel’s occupation of the West Bank, cooperation might sound suddenly meaningful to Jewish Israelis. The prospect of closer integration into the EU for the one or two states presents another common interest for joint politics. Freedom of movement inside Israel-Palestine, and between Israel and its Arab neighbors, is a third window for fresh air. And so on.

A formal coalition is preferable of course, but even an informal one can — for the first time in years — break the deadlock by putting the extremists on both sides on the defensive. And even if an electoral coalition is not feasible considering the proximity of the elections, Israel’s political scene would witness a sea change, with a real opposition and a real commonalty of purpose for the first time, beyond the one state, two state quandary.

The pride of Abu Ein’s followers in his message of nonviolence is worth an embrace. Someone should be knocking at the door. “Who’s there” would be a good initial response. So far, there is no knock, and no answer.

Chibli Mallat is a lawyer and law professor in Lebanon and the United States, and a former candidate to the Lebanese presidency. His latest book, Philosophy of Nonviolence, will be released in January 2015 at Oxford University Press. He is the chairman of Right to Nonviolence, a Middle East NGO based in Beirut.

Related:
Two state vs. one state debate is a waste of time, political energy
Not just escalation: A frightening new era of Jewish-Arab relations in Israel