Israel shut down Gaza’s ability to conduct trade because of flaming balloons and kites that Palestinians have been floating over the border. There is no security justification, just collective punishment. 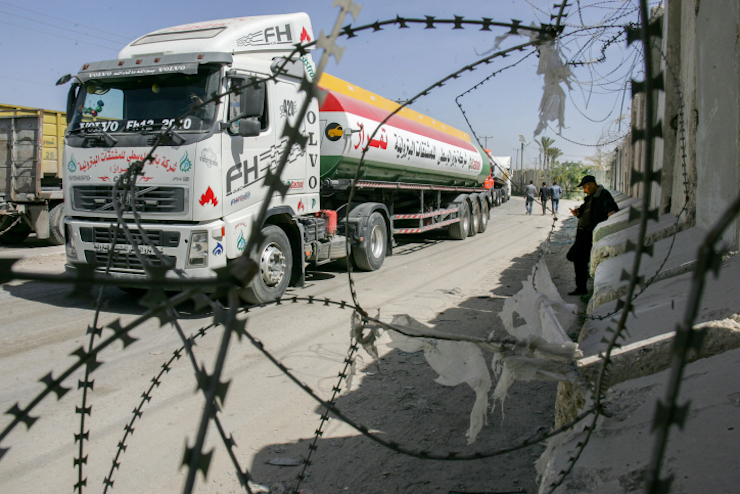 A truck is seen at the Israeli army controlled Kerem Shalom crossing, the only commercial crossing where goods can enter and exit Gaza, March 22, 2018. (Abed Rahim Khatib/Flash90)

Israeli authorities often claim that the siege on Gaza is about security. Hamas and other armed Palestinian groups must not be allowed to import weapons or materials to build weapons, they say. It is a necessary measure. It’s about security.

That is partly true, sometimes. That is, except when it’s not.

The Israeli political leadership announced this week that it is cshutting down Gaza’s only commercial connection to the outside world. Not that the people of Gaza were allowed to do much trade with anyone before the crossing was closed, but now Israel took away the little commerce it had allowed until now.

Surely there is a good reason. A security reason.

Perhaps Israel received solid intelligence that Iran’s Revolutionary Guards Corps was trying to sneak advanced weaponry into Gaza in a shipment of medical supplies? Or maybe the Shin Bet discovered a plot to place explosives in a furniture shipment destined for the West Bank?

Either of those scenarios would have been a legitimate reason to temporarily halt commercial activity at the Israeli controlled crossing so that shipments could be more closely inspected and to mitigate the threat. That’s not what happened.

The decision to tighten the siege on Gaza was collective punishment, pure and simple. Nobody is hiding that.

Israel’s political and military leadership were very clear that its decision to stop all commerce between Gaza and the rest of the world was a response to kites and balloons, sent from Gaza into Israel carrying crude incendiary devices, which have caused considerable damage to Israeli agriculture in recent months. 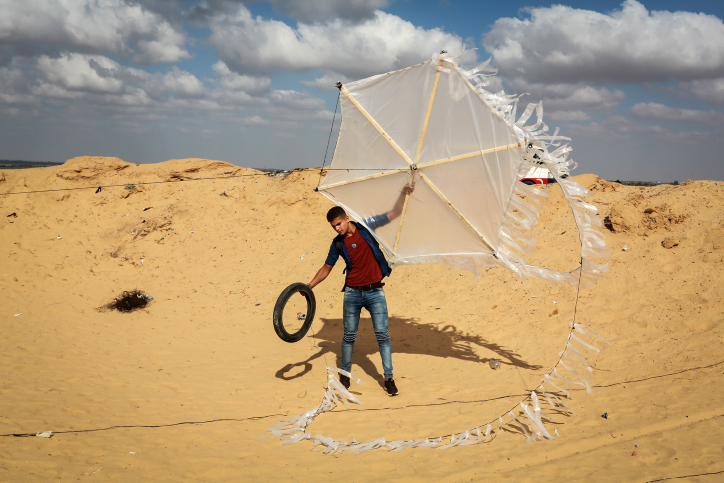 A Palestinian youth in southern Gaza is seen preparing to send an incindiary kite toward the border with Israel, June 29, 2018. (Abed Rahim Khatib/Flash90)

In other words, millions of people are being made to suffer because of the actions of a few. And the Israeli army has threatened to make things even worse if the kites and balloons continue. That is not a decision based on security considerations: it is a political decision — a political decision to destroy Gaza’s economy.

It is a political decision to ratchet up the suffering of a civilian population that Israel has been economically suffocating for over a decade. Businesses will go bankrupt. An economy with unemployment approaching 50 percent, where more than half of the population subsides on less than $4.60 a day, and where some 70 percent of the population receives UN food assistance, will lose even more jobs.

Israel has never made a secret of the fact that the siege itself is a form of collective punishment. One doesn’t cut millions of people’s electricity supply, ban the import of “luxury goods,” forbid all exports aside from flowers and strawberries, and limit food imports based on the minimum number of calories you think Gazans need to survive — for security reasons.

“With the blockade, Israel also hoped to turn Gazans against Hamas by contrasting Hamas rule with the better life of Palestinians in the West Bank,” the U.S. Congressional Research Service wrote in a 2010 report on the blockade. “Instead, the blockade isolated the territory and helped to strengthen Hamas’s control.”

Israel’s plan to starve the civilian population into revolting against their unelected leaders has done nothing other than make life for Gazans more miserable with each passing year. It has also not stopped Hamas from importing and producing thousands of rockets which it fired into Israeli population centers in the three wars since the siege began.

So if the siege isn’t providing security and it isn’t producing regime change, what is the logic behind the cruel policy?

According to one former cabinet minister, the only reason the siege remains in place is “inertia.”

It’s time to end the siege.