The banality of the ghetto: The term ‘ghetto’ migrated from Europe’s Jewish communities to Israel’s ethnically mixed towns — both as an idea and an institution for controlling the Palestinians who remained in Israel after 1948. 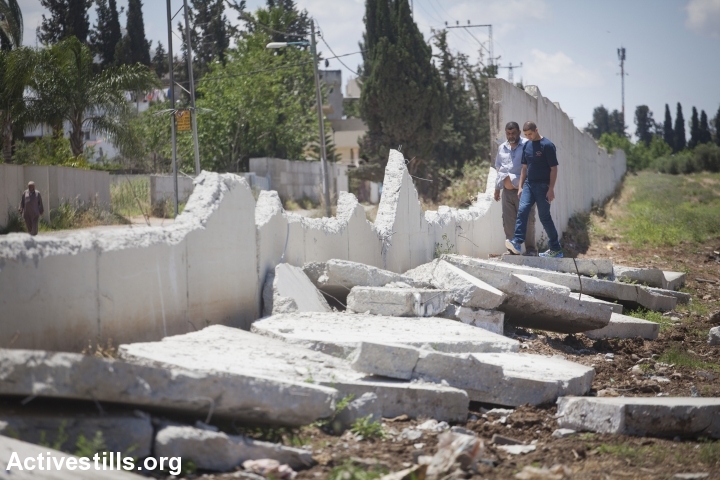 A damaged section of the wall separating Lydda/Lod’s Palestinian neighborhood of Pardes Shanir and the Jewish town of Nir Tzvi, 2013. (Oren Ziv/Activestills.org)

In the aftermath of Jaffa’s conquest in 1948, Moshe Erem, director-general of Israel’s Ministry of Minority Affairs and Tel-Aviv City Council member, wrote to minister of minority affairs Bechor Shalom-Shitrit:

‘Ajami will be from now on surrounded by Jewish housing on all sides. We can assume that there is no threat to security in the city. But for some reason this was not enough and now they are about to circle the neighborhood with a barbed wire that will separate the Arab neighborhood and the Jewishhousing projects. This arrangement will immediately give ‘Ajami the form of a ghetto, closed and segregated. It is hard to come to terms with such a notion, which invokes associations of horror. Is it really necessary? Why do we need to make things worse and deepen in the hearts of the Jaffa residents a sense of bitterness and perpetual hate? A barbed wire is not a temporary project; it will always be remembered as a source of malicious poison. (IDF Archives, August 11, 1948, 1860/1950-1)

Two decades later, in 1965, an article described the ghetto in Ramle as a fait accompli:

For him the neighborhood is Ramle. For Ramle’s Jewish residents it is — the “ghetto.” This is the common term in use. Not in its negative sense, God forbid, just an expression brought from their countries of origin which took root among them. The “Arab ghetto,” akin to the “Yemenite neighborhood” and so forth. But after spending two hours with Ali Bin Hasan of the district, we realized that indeed the Arab neighborhood is like a “ghetto.” Not so much for the Jews outside it as for the Arabs in it. (Maariv 27/8/1965)

Moshe Erem’s critique expresses the ambivalence of the Israeli establishment with regard to the ethnically mixed realities in a (very limited) number of cities in Israel that qualify as “mixed towns.” Throughout the years these cities were perceived as an adverse effect of the 1948 war and as a challenge to the Zionist ideology which sought to establish a Jewish/Hebrew space free of aliens, especially Arabs. To this day, mixed population spaces are an exceptional and marginal phenomenon in the Israeli landscape, where more than 90 percent of the Palestinian citizens live in Arab towns and villages and an overwhelming majority of the Jewish citizens reside in towns with no Arab population to speak of. 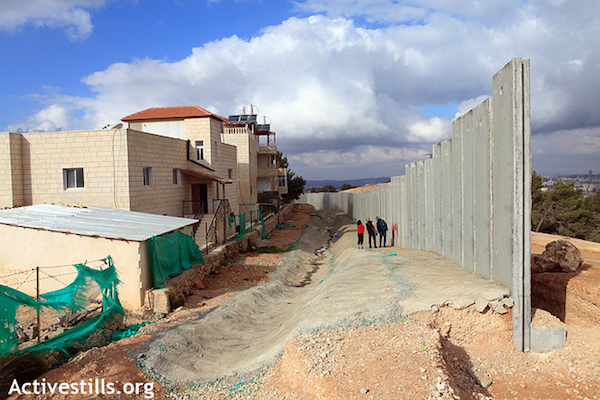 The term “mixed towns” [‘arim me’oravot in Hebrew and mudum mukhtalata in Arabic] can be deceiving. From its early days, the State of Israel labored over the separation of the Jewish and Arab populations, seeking to group the latter in confined urban spaces. Although Erem’s statements invoke critical reservations about the physical closure of an Arab-designated spaces (in the form of a barbed wire creating “a  ghetto, closed and segregated”), they do not challenge the very principle of population separation. It is noteworthy that the ethnic separation principle was meant not only to drive a wedge between Jews and Arabs (it might have even been its secondary function) but mainly to prevent Arabs from trespassing beyond their designated territory and thus call into question the Judaization of space.

Like a self fulfilling prophecy, it is the concept of the “ghetto” that took root to denote the urban spaces where the Arab population was forced to relocate. Thus, a highly charged term in Jewish history became a common figure of speech not only for the agents of the Israeli establishment but among the Arab minority in Israel as well. For years, in a rather matter-of-fact banal manner, the Palestinian residents of ‘Ajami referred to their own neighborhood as the ghetto and such is the official name of the main Ramle Arab district, invoked by city planners and residents alike. Similarly, in Lydda a pastry shop went by the name of “Ba-Ghetto” (Hebrew for “in the ghetto” and a play on the French word baguette) and sold baguette sandwiches and cakes to local customers, Jews and Arabs.

It is a difficult task to trace the tortuous trajectory of the “ghetto” concept from a term designating the persecuted Jewish minority in Europe all the way into the Israeli discourse and its subsequent banalization in everyday parlance. In any event, this appropriation resulted in the term being extended beyond the sphere of the Arab population to being used as a synonym for any reality of exclusion, poverty, neglect and discrimination. Resonating with the “Black ghetto” in the U.S., in Lydda under the title “Ghetto Life and Decay,” the city in the 1950s was described as a bleak and dark space that singled out the Mizrahi “lumpenproletariat”:

When you walk around the “Sakne” ghetto and see the withered lives of the residents of its dark houses and basements, without minimal sanitary conditions, you feel that nothing has changed in the lives of these people who were transferred from the dark and notorious ghettos of Morocco. The same social conditions, where simmers the lumpenproletariat, the anti-social microbe, off which feed fascism and the dark forces in our country as well. (Al-Ha-Mishmar, 17 October 1954).

Newspaper articles with such titles as “In the beginning was the ghetto” continue to nourish the public discourse on Arab-Jewish and Mizrahi-Ashkenazi relations in these cities to this day. However, while official public rhetoric for the Mizrahim sought to remove them from the ghetto through integration schemes, for the Arabs there was no such political will, not even on a declarative level. 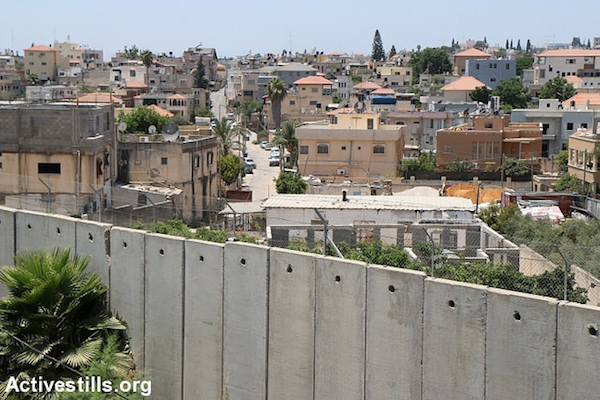 The Arabs in mixed cities, therefore, remained confined in ghettos. But precisely through the complex reality of an Arab minority in a Jewish-majority space, manifested the ambivalent facets of the ghetto. It must be said that the ghetto was always a paradoxical phenomenon: home, prison and refuge all at the same time. The 15th century saw the founding of the mellah — the walled Jewish district in Morocco, and subsequently in Italy of the 16th century (where the term was coined after a foundry in Venice). Despite the profound differences between the Middle Eastern city and European urbanism, in both cases Jews thrived as an alternately excluded and protected community. Throughout the centuries the ghetto defined a unique modus vivendi between Jews and Christians on the margins of society, disrupted by periods of persecution, pogroms and deportations. In the last decade, the Jewish ghetto regained visibility and distinction by turning into a World Heritage Site, a real-estate commodity and a desired touristic attraction. From Krakow and Prague to Budapest — the ghetto is embedded in a new process of soul-searching and the rediscovery of Jewish urbanism after 70 years of disinvestment, destruction and repression. As part of the global politics of identity, Jews and non-Jews alike make pilgrimage to experience an imagined authenticity in places where almost nothing remained but the built mantle: relics of Jewish culture without Jews.

In Israel this dialectic assumed a different meaning: on the one hand, the ghetto served the purpose of the Israeli regime to separate the populations for security and ideological reasons. On the other hand, the very existence of a distinct and empowered Arab community posed a threat, hence the formulation of a national policy to Judaize space in order to weaken Arab communalism. In a space that was defined by the planning discourse in the aftermath of the 1948 war as “slums” and as the “back yard” of the metropolis, the ghetto persisted as a marker of cultural, ethnic and class-based alterity. Like elsewhere, in Jaffa, ‘Ajami still fulfils the historical role of the ghetto as a safe space for its residents, but while in Europe emancipation allowed the people of the ghetto to leave it behind and become an integral part of modern urbanity, in Jaffa processes of gentrification allow Jews to enter Arab neighborhoods without allowing Arabs to become a legitimate part of the wider urban fabric. Thus, the Arab neighborhoods came to represent a hybrid intersection between the classical ghetto (an instrument of closure and control defined by external violence) and the ethnic cluster (a community space of solidarity defined by voluntary separation). Much has been written on the Occupied Territories, refugee camps, development towns and distressed neighborhoods as a kind of a ghetto, but while these operate as a political metaphor or a sociological concept, in mixed towns the ghetto is a spatial marker and a figure of speech that turned indigenous for local residents.

In the past decade Israel has built new ghetto walls, separating Arab neighborhoods of East Jerusalem from Jewish neighborhoods. (Activestills.org)

It is telling that the ghetto survived as a concept long after the wartime conditions that created it as a spatial fact faded away. In Jaffa the ghetto was the barbed wired area known in Arabic as the Silk where Arabs were concentrated during and after the 1948 war. Even before martial law was revoked in mixed towns in the summer of 1949 (while remaining in effect in the Galilee and Triangle Arab regions till 1966), the urban ghetto was trespassed from within (by Palestinians who were seeking employment) and from without (by Jewish immigrants seeking housing). Also in Ramle and Lydda spatial boundaries didn’t necessarily correspond to the boundaries of the concept. Throughout the years, exclusionary mechanisms of planning continued to fixate the principle of communal separation, but the term itself survived and was even adopted by the local Arab residents. Paradoxically however, we cannot ignore the fact that the history of Jaffa, Ramle and Lydda shows that it is precisely the isolation of the Arab population in ethnic spaces that enabled the crystallization of the national Palestinian political community from the 1970s by the first generation born after the Nakba.

It is hopeful therefore to realize the relative failure of the ghetto as a marker of the ethnic otherness of the Arab population in mixed towns. Paradoxically, it is the newly mixed towns — originally planned as Jewish enclaves and recently reconfigured due to the migration of middle class Arabs to Jewish cities such as Nazareth Ilit and Carmiel — that might herald the collapse of the exclusionary ethnic segregation policy. The trend of exiting the ghetto continues as young urban Palestinians attempt to imagine themselves as part of a cosmopolitan Arab space that bridges Jaffa, Beirut and Cairo. Like many key concepts in the political discourse between the Jordan River and the sea (Shoa/Nakba, Diaspora/Gola/Shatat, Settlement/Hitnahlut/Sumud, and recently also Revenge/Nekama/Intiqam), the ghetto binds Palestinians and Jews together in one bloody cloth. Mahmoud Darwish wrote on this contrived proximity in Under Siege: “Me or Him — Thus begins the war. But it ends with an awkward encounter: Me and Him.”

Daniel Monterescu is an urban anthropologist at the Central European University. His book Jaffa Shared and Shattered: Contrived Coexistence in Israel/Palestine was recently published by Indiana University Press. A Hebrew version of this article also appears in Haaretz.