How the ‘newspaper of the nation’ reported on a Border Policewoman’s killing of a Palestinian teenager who was found to have been carrying a toy gun. 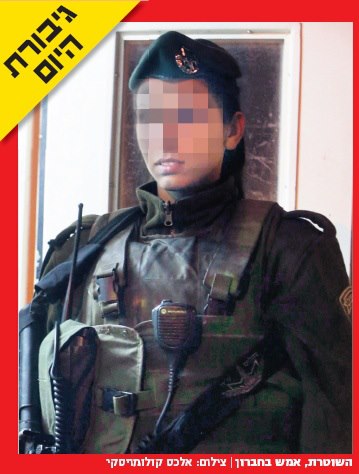 Yedioth Ahronoth’s picture of border policewoman who shot a Palestinian in Hebron. The writing: “Heroine of the day”

Yedioth Aharonoth’s coverage of Wednesday’s killing of a Palestinian teenager in Hebron tells you pretty much everything you need to know about how Israeli brainwashing works. And Yedioth, the country’s most widely-read, influential newspaper, is considered relatively liberal, which it is in the sense that it often criticizes Netanyahu and the right, but when the story is Israel vs. the Arabs, particularly the Israeli army vs. the Arabs, then Yedioth, the “newspaper of the nation,” becomes as crude, dishonest and gung-ho a war propagandist as can be. It tells the public what it wants to hear, and whenever it’s Us Against Them, what the public wants to hear is Us Good, Them Bad – which is what the army and the government are only too happy to tell them. When that’s the story, Yedioth, like every other major news medium in the country, except for the left-leaning Haaretz (where I work as a copy-editor), takes the army/government line, kitsches it up real good, and serves it to an eager mass of consumers. Brainwashing – by popular demand. You see it here constantly. Yedioth’s coverage of Mohammed Sleima’s killing by Border Policewoman “N.” in Hebron is a perfect example.

The tabloid’s front-page headline on Thursday read: “Border Policewoman kills terrorist.” Her pixilated photo was tagged: “Heroine of the day.” Opening up the paper, the page two headlines, against an ominous black background, went as follows: “Fourth clash of the week in the territories; Border Policewoman shoots terrorist near Cave of the Patriarchs – and kills him; The fear: A third intifada; Border Policemen in Hebron yesterday notice a suspicious Palestinian youth and demand his identification; In response he attacks one of the troops and pulls a pistol on him; Female commander of the post reacts calmly: She pulls a pistol and kills the terrorist.”

It’s only when you’re almost halfway through the page two story that you read: “At the end of the investigation it turned out that the pistol [Sleima] had on him was fake.”

The photo on the following page shows N. on duty with her back turned, and is tagged: “The heroine from the Border Police.” The caption is a quote from an interview with her after the killing: “I love being in the field.” Below that is a small photo of Sleima holding an unidentifiable flag, with the caption reading: “Celebrated his 17th birthday yesterday: The terrorist.”

In the accompanying story, N. describes how after she and her partner stopped Sleima, she went to get a form to fill out and “suddenly I heard them fighting. I saw the Palestinian knock the soldier down and point a pistol at him.” She tells how she “had no time to think, I had to act in a split second or my partner would have been hurt,” and it’s only afterward, near the end of the story this time, that the detail about the gun being a toy is mentioned.

The last paragraph is a standard Israeli tabloid exercise in puffery about the heroic soldier, presenting her or him as a role model. “The soldier explained that she had wanted to do her military service as a fighter in a meaningful capacity, so she went into the Border Police. ‘I love being in the field. It didn’t suit me to be a clerk in an office. Our duty isn’t scary, although seeing a terrorist point a gun at your partner definitely isn’t an easy thing to go through.’ She plans to take an officer’s training course and is even interested in becoming a career soldier.”

In this whole two-and-a-half page extravanganza, the one sentence that challenges the official Israeli version of the shooting is this: “According to [Sleima’s] parents, he was only going out to buy a cake for his birthday.” The idea that a Palestinian teenager attacked an armed Border Policeman with a toy gun is swallowed whole, then regurgitated as a Wonder Woman comic, with Mohammed Sleima as her evil nemesis.

This is the newspaper of the nation, this is the “fiercely independent” Israeli media, and this is what sells around here. So you see, Mr. Congressman, how can we ever have peace when the Palestinians keep inciting their people against us?

Related:
Why was 17-year-old Muhammad killed?