As nearly 40,000 Bedouins face displacement from their homes as a result of the Begin-Prawer plan, when propagandists on behalf of the state are circulating lies about the ‘Bedouin invasion of national land,’ it is important to hear the historical facts from an expert who has been living in the region for many years. 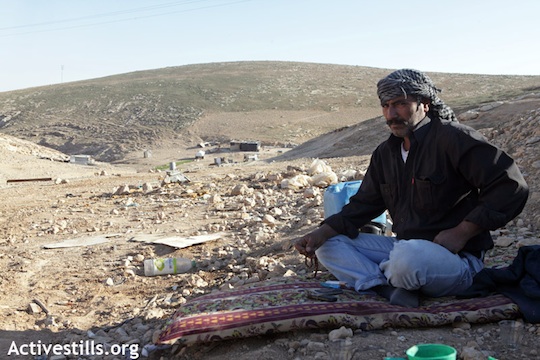 A Bedouin man looking over the ruins of his demolished home. [illustrative photo], (Anne Paq/Activestills)
Dan Gazit, 76 years old, is an archaeologist from Kibbutz Gvulot, who has done a lot to discover and preserve the ancient history of the Bsor region. He regularly writes about his archaeological findings and the general history of the Negev in his column in Kacha Ze[“That’s the way it is”], a magazine serving the residents of the Negev’s Eshkol Regional Council. In the 104th edition of the magazine (August 2012), Gazit turned his gaze toward the recent history of his surroundings – the events of the War of Independence and the fate of the Negev Bedouin in the years 1948-1952. His fascinating article follows.

Now, when nearly 40,000 Bedouins are facing the threat of being uprooted from their homes as a result of the Begin-Prawer plan, when propagandists on behalf of the state are circulating lies about the “Bedouin invasion of national land,” it is important to hear the historical facts from an expert who has been living in the region for many years. These facts are probably well-known to many Israelis who lived and were active in the Negev in the 50s but would rather forget them (for an illuminating historical research of Israeli policy towards the Bedouins during Israel’s first years, click here). In the midst of the expulsion operation carried out against the al-Arakib tribe in the Rahat area, at the end of 1951, the Negev’s military governor, Michael Hanegbi, explained that the reasons for the expulsion were not just security-related, but also economic:

The Bedouins control an area of around 100,000 Dunams of fertile land in that area, which stands in the way of planning more dense settlement in the area and further development.

This could have been written nowadays by planners at the Israel Land Administration or the Israeli Ministry of Construction and Housing.

Gazit reminds us that the IDF expelled 12 tribes across Israel’s borders, including friendly tribes; that the plundered lands, 2 million dunams of Bedouin plots, were immediately allocated to Jewish communities in the Negev, and the latter employed the former owners of the land as “serfs”; that the Negev kibbutzim plundered herds of sheep and goats and plowed Bedouin lands with IDF encouragement; that there was an archive in the Beersheba Municipality during the British mandate era with all the land ownership data for the Bedouins of the province; and that the main reason why Bedouins have trouble proving ownership of lands they were settling as early as the Ottoman period is that after the occupation of Beer Sheva the Israeli authorities took care to “lose” the archive’s content during its transfer to the State Archive. The State of Israel, which disappeared the Bedouin ownership data of their lands in the Negev, is now expelling them from their land, claiming that they have no official ownership documentation.

I thank Dan Gazit for allowing me to publish his article on my blog.

(Perhaps) now it is okay to discuss this: The expulsion of the Bedouins from the Bsor Region after the War of Independence

I must preface by saying that I have deliberated at length as to whether I should introduce this loaded topic. The crucial factor was the need to insert, following 108 publications of my column, an important chapter in the history of the Bsor Region; for the sake of due disclosure, I am not a “post-Zionist,” but nor do I not accept the claim that “they were the ones who started it” (because, among other reasons – in some cases it is inaccurate, to say the least).

The entire article is based on photocopies I own of original documents and research, sorted from the archive of Dr. Hanina Porat. I have researched the issue of land law and land ownership claims in the Negev during my PhD studies at Ben Gurion University and discussed it with Adv. Dr. Halil Abu-Rabi’a, who is an expert on the issue.

During the struggle for independence and the battles against the Egyptians (from December 1947 to December 1948), the Bsor Region’s 15,000 Bedouins were split: some were hostile, some sat on the fence and some collaborated with the Jews to a certain extent. After the Egyptian invaders were pushed back across the border from the Negev in operation Horev (the end of December 1948), 15 tiny Hebrew kibbutzim remained in the Bsor Region – some in the process of transfer or dismantling – among some 5,000 Bedouins who dwelled in encampments, villages and hamlets. Only after a critical five to seven months, were five additional kibbutzim established overlooking the Gaza Strip border, and a few moshavim were built along the main travel routes (today’s roads 25 and 241) during 1949.

At the same time, 10,000 Bedouins who had fled the war zone, and had waited for the end of the war beyond the Negev Mountain and the “Green Line” returned to their lands. These Bedouins were late. While they were gone, a population census was held. They were declared rights-deprived “absentees,” and the state deported them across the border.

Immediately after the war, the state declared the lands temporarily evacuated by Bedouins during the war to be “abandoned land.” In the second stage, the entire Negev was expropriated. Most of it was made military training zones, and yishuvim [Jewish communities] were built in abandoned villages and near them, in order to preempt a claim for the return of the Arab population.

No more than a week following the occupation of Beer Sheva during operation Yoav (October 21, 1948), all the Bedouins who had been living within 10 kilometers of the city were expelled across the border, as well as all the tribes southwest of the city, all the way to Halutza; a month later an order signed by Yigal Alon, the commander of the southern front, was issued, ordering the displacement of the “friendly tribes” and their transfer to an area near the West Bank border (the “Green Line”), north of Beersheba. Druze units participated in the expulsion.

Following the end of all combat operations, Two million dunams of Bedouin lands in the northern Negev were allocated to the northern Negev [Jewish] communities. Some of these lands were later given to the Negev communities, and Jewish thugs, who worked the previous owners of the land on their lost property in conditions of serfdom.

The expulsion of 12 tribes between Beersheba and the Gaza Strip did not bring security to our area. Convoys of smugglers used to pass frequently between Gaza and Hebron, through the Bsor Region, and Egyptian army intelligence squads moved about freely throughout, to the extent that the heads of the local councils convened and vehemently demanded that the army wipe out the remains of the northwestern villages, which were being used as hiding spots for spies and infiltrators. Theft, damage to property and physical assault – against soldiers and civilians – were commonplace.

In August-September 1950 it turned out that Bedouins from the Azazme tribe were responsible for a series of explosive mining operation in the western Negev, in which Jews were killed. In response, thousands of the Azazme were expelled across the Egyptian border. During these operations – which elicited condemnations by the U.S. and the UN – 13 Bedouins were killed. In September 1952, 850 Bedouins of the a-Sani tribe living between the Hatzerim and Ze’elim kibbutzim were expelled to the south Hebron Hills, since they refused to leave their lands and move south to the Negev Mountain.

In order to overcome security problems in our region, the IDF revalidated an old unwritten shoot-to-kill order from June 1948 in any “suspicious” encounter with Bedouins. Military forces occasionally combed the Bsor Region to “hunt” Bedouins who had returned to their lands or overstepped the boundaries of the area to which they had been expelled. Some of these encounters ended in the killing of Bedouins. In the beginning of the 1950s, some kibbutzim participated in the “hunting,” plundering herds and plowing Bedouin lands – all approved and encouraged by the IDF.

It should be noted that after the War of Independence the Bedouins were forbidden from entering Beer Sheva, their traditional and economic center.

And on the issue of Bedouin lands: since a policy of land deeds and ownership registration had not been practiced in the Negev, the municipality of Beer Sheva had an organized archive during the British mandate period, which contained all the agreed ownership arrangements for Bedouins in the province. Following the occupation of the city in the War of Independence the archive was transferred to the State Archive and then it was lost (by the way, a similar “trick” also occurred after Jaffa was taken over on May 13,1948). This is one of the reasons why there is no agreement to this day on the ownership claims to 800,000 dunams in the northern Negev.

Over the years, numerous lawsuits have been filed and heard, examining Bedouin ownership of lands in the northern Negev; only in a fraction of the procedures were Bedouin ownership claims accepted, or damages paid as compensation for the land, since the land rights laws in the State of Israel do not necessarily correspond with the British mandate and Ottoman laws, under which the claims had been filed, and also for the lack of documentation.

On March 15, 2012 the Beersheba District Court issued a precedent-setting ruling on the matter of al-Araqib lands, near Rahat (“el-Oukby vs. The State of Israel”). In a long and detailed decision, the court ruled that the plaintiffs have not succeeded, in spite of calling numerous experts to the stand (geographers and historians who relied mainly on old aerial photos) – to establish an ownership claim of any sort, according to any land law, in the case of the disputed land (one aspect of the disagreement in court involved the application of the definition of “Yishuv” [permanent residence community] – which is a legal term – to permanent encampments; the court also ruled that the land be transferred to the Negev Development Authority and the Israel Land Administration, and also ruled that the plaintiffs pay legal expenses in the sum of NIS 50,000.

This post was first published on Idan Landau’s blog.