Those who attacked Palestinians in central Jerusalem claimed they wanted to prevent them from speaking to Jewish girls. The fear of interracial relations once found only in the fringes of the right are now turning into a legitimate, mainstream political issue in national-religious circles. 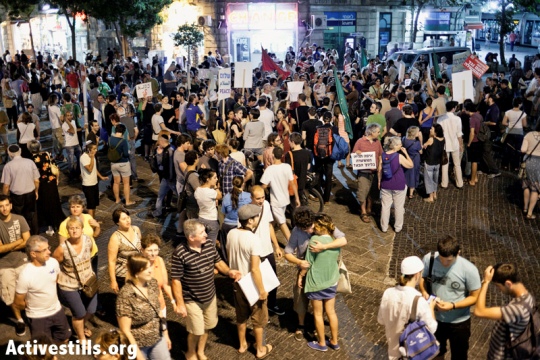 A protest against the attack by a Jewish mob on three Palestinians in Zion Sq., Jerusalem. August 18, 2012 (photo: Activestills)

Jerusalem Police are still carrying out arrests of suspects – mostly teenagers – in Friday’s shocking attack that took place in the city’s center. A few dozen Israeli Jews beat up three Palestinians, leaving one gravely injured and still hospitalized.  According to several testimonies, the attackers also tried to interfere with medical treatment being provided to the wounded. At least one of the suspects was quoted in the Jewish media expressing regret that he and his friends weren’t able to kill their victim.

The event happened only several hours after a firebomb was thrown at a Palestinian taxi, leaving six people wounded. The events were unrelated, but they brought back fears of Jewish terrorism against Palestinians. As Roi Maor notes, unlike Palestinian attacks on Jews, attacks by Jews are under-reported, under-investigated, and under-prosecuted by the authorities.

The latest attack was rightly condemned by left-wing and (few) right-wing politicians. Less discussed was the motive given by some of the suspects for their attempted lynch. According to an eyewitness account published by Yedioth Ahronoth, the attackers claimed that the Palestinians tried to talk to a Jewish girl. Other reports claimed the attack had to do with the desire to prevent contact between Palestinian teenagers and Jewish girls.

There are several organizations promoting ethnic segregation in Israel, with a special emphasis on preventing relations between Jewish girls and Palestinian men. The most vocal is Lehava, an NGO that calls upon citizens to inform them of any case of mixed marriage or relationship. Their low-tech internet site, filled with racism and hate-talk, has a section titled “shame page,” which features the pictures of women, mostly public figures, who are in relationships with non-Jews. The head of Lehava, a Kahanist called Bentzi Gopstein, said today that the Jerusalem attackers “have raised Jewish honor from the floor and did what the police should have done.”

Lehava wouldn’t merit much attention if it wasn’t for their legitimacy in right-wing circles. In February 2011, MK Tzipi Hotovely (Likud) invited Gopstein to a formal session of the Knesset Committee for the Advancement of Women, along with other members of organizations who work to expose and prevent inter-racial relations. The title of the hearing was “the phenomena of assimilation in Israel – a special session in honor of Jewish Identity Day.”

Gopstein had the opportunity to explain the work of his organizations, and even to complain about “lack of cooperation” from the Ministry of Education; he mentioned the case of a school in Bat Yam “where 20 percent of the girls are dating Arabs.” MK Hotovely turned to a representative from the Department of Education, Dr. Zvi Zameret, for an explanation, and the latter, instead of calling racism for what it is, replied: “This is the first time I am hearing those figures… I made a note to look into that.” A Hebrew protocol of the session can be found here.

A quote from Gopstein was the first one to appear in a press release that MK Hotovely sent following the session, and other Knesset members present at the debate congratulated her for tackling this issue. 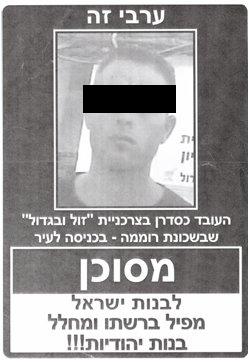 A flyer warning the public about an Arab who threatens to “defame” Jewish girls, distributed in a Jerusalem neighborhood in 2011.

The holy war against interracial relationships has been central to the agenda of racist groups throughout modern history. In many places, the first to suffer from attacks (and later, laws) were Jews. An attempt to introduce laws against intermarriage was the main reason the Knesset rejected Jewish supremacist Meir Kahane in the 1980s. At the time, Justice Shamgar wrote that such ideas “remind us of the worst persecution in Jewish history.”

Times have changed. The demand for racial purity is becoming mainstream, re-entering the Knesset through the front door. Leading rabbis, most of them state employees, have signed letters calling on Jewish homeowners to refrain from renting their apartments to Arabs, or warning Jewish girls against dating Arabs.

It’s a form of racism that treats women as the object of the (Jewish) man, his to keep within the tribe. It’s not surprising therefore that the calls to ban women from public life come from the same national-Orthodox circles who want to “save” those women from Palestinian men. But while the attempts to limit the presence of women in public are (rightly) meeting fierce opposition, the revolting attempts to delegitimize, ban or punish interracial relations are endorsed by not-so-marginal circles, and practically accepted as a legitimate political concern within the Jewish mainstream.