What has four propellors and a camera?

Participants in the weekly protests against the separation wall in the West Bank village of Bil’in were surprised Friday to find that the army was using a new tool to put down the demonstrations. For the first time, a small drone equipped with four propellors and a camera hovered above the protesters as they marched toward the wall and chanted slogans.

I asked the IDF Spokesperson’s Unit what the purpose of the drone was; I have yet to receive a response. The camera can be used for a number of purposes, although in light of past experience, it is likely to be used to assist soldiers in dispersing demonstrations or photographing protesters for arrests or to use in future trials. Bil’in photojournalist Haitham Khatib managed to snap a photo of the drone as it hovered above the protesters on Friday: 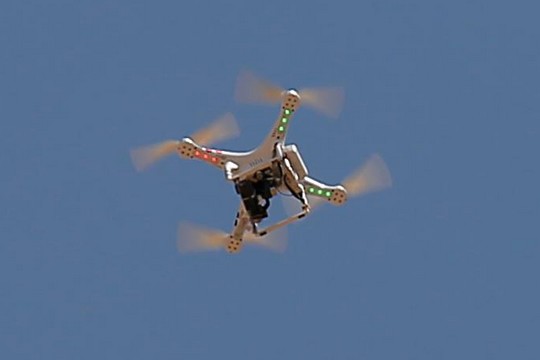 Photos taken at the demonstrations help the army arrest and interrogate protesters, especially young ones, are often used to incriminate protest organizers.

In April 2014, the army revealed yet another weapon for suppressing demonstration: a remote-controlled water canon that was installed atop the separation wall in Bethlehem, which allows the tracking and dispersal of protesters without the presence of soldiers.