Official Israel loves to boast of the complete freedom of worship it grants to members of all religions. In reality, however, it’s just another deception brought to you by your local ‘hasbara’ dealer. 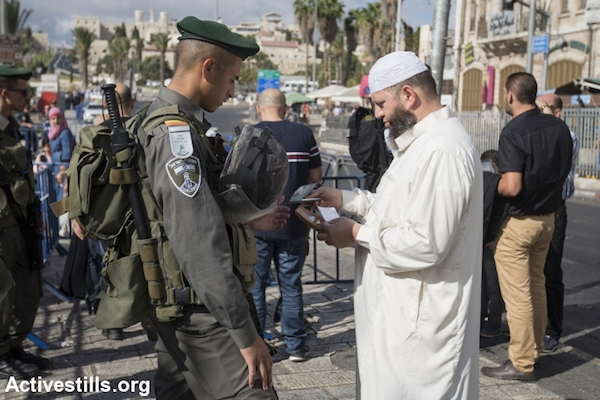 One of the main tools in the Israeli hasbara toolbox is the ‘religious freedom’ discourse. As subscribers of the “villa in the jungle” worldview, Israel advocates never miss an opportunity to emphasize the religious freedoms that Israel supposedly gives to believers of all faiths, unlike its Arab neighbors. Prime Minister Netanyahu, especially, loves to make this claim — and he repeats it ad nauseam. For instance, in a special message at the dedication ceremony for the Hurva (“Ruin”) Synagogue in the Old City of Jerusalem a few years ago, he said:

[…] For the first time in generations, we allowed members of the other religions to pray in Jerusalem and to restore their places of worship. To pray in complete freedom of religious worship […] We returned to our cities, we came to build our houses of worship, but at the same time, we are also giving the same freedom of worship to other religious. That is the uniqueness of the nation of Israel: we preserve our own heritage while at the same time allowing others to do the same.

The papal visit to Israel this year was yet another chance for Netanyahu to reiterate:

[The Pope’s] visit here is an opportunity to show the world the true Israel, the advanced, modern and tolerant Israel, in effect, the only country in the Middle East that ensures complete freedom of worship to those of all faiths, guards the holy places and ensures the rights of all – Jews, Muslims, Christians, everybody.

Of course, that tolerant paradise is not quite the reality we live in. The daily reality that the occupation brings to the Old City of Jerusalem is not that of free men of different religions who have unhindered access to their holy places; it is a reality of structured conflict between occupiers and the occupied. First off, there are the more than 2 million West Bank Palestinians living under Israeli military rule who need special permits to even enter Jerusalem, permits that we know are handed out sparingly at best.

However, even for Palestinian residents of Jerusalem itself, access to the Aqsa compound is not guaranteed: it is regularly restricted according to the whims of Israeli authorities. During the recent Rosh Hashana holiday, for example, Israeli police prevented Muslim men under the age of 50 from entering the compound; while flocks of Jewish worshipers flooded toward the Western Wall, Muslim worshipers stood facing down a wall of police separating them from the mosque. 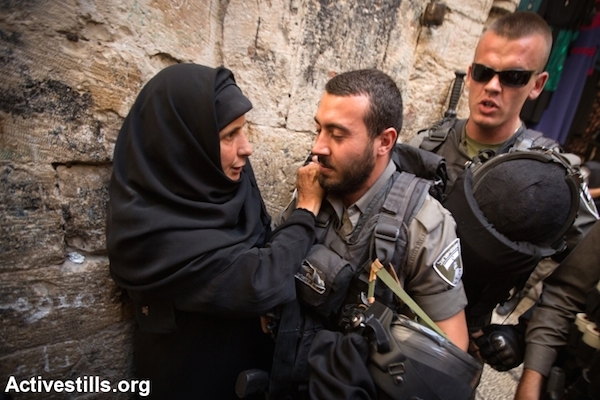 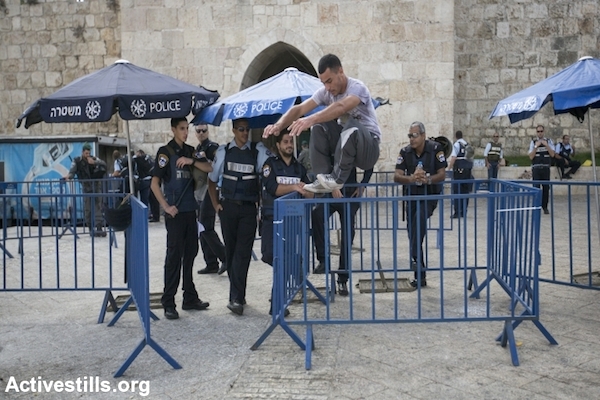 A Palestinian man performs Parkour at an Israeli police checkpoint in the Old City of Jerusalem, September 26, 2014. (Photo by Faiz Abu Rmeleh/Activestills.org) 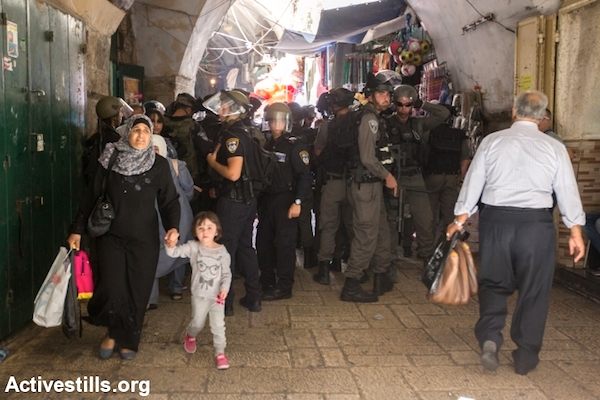 It’s not only during Jewish holidays that Israel restricts Muslim worshipers’ access to the Aqsa Mosque — it does the same during Muslim holidays, too. The excuse, as always, is security. It’s a viscous circle in which tens of thousands of people are prevented from accessing their holy sites out of fear of riots, which is ironic considering the hindering of freedom of worship itself feeds the feelings of anger that Israel fears so much.

Meanwhile, Jewish politicians and public figures make provocative visits to the Temple Mount from time to time to demand that Israeli sovereignty be exercised upon it. And that happens despite the traditional prohibition against Jews entering the Temple Mount compound for halachic reasons. That’s just how it is, it seems, when the man in charge of the two relevant government portfolios — the Religious Services Ministry and Jerusalem (and Diaspora) Affairs Ministry — is the same man who has already declared his intention to increase the Jewish presence on the Temple Mount.

But of course it’s not only religious interests at play here. A short refresher course in the not-so-distant and bloody history of the conflict can remind us all how that is bound to end.