Director Farschid Ali Zahedi fled Iran for Germany following the Islamic Revolution, where he became fascinated by Jewish history and the Holocaust. After four years of work he is now releasing his latest film on the extermination of Jews in the Ukrainian city of Kovel. Orly Noy sat down to speak to him about debuting his film in Israel, the memory of the Holocaust, and the bleeding wound of his homeland. 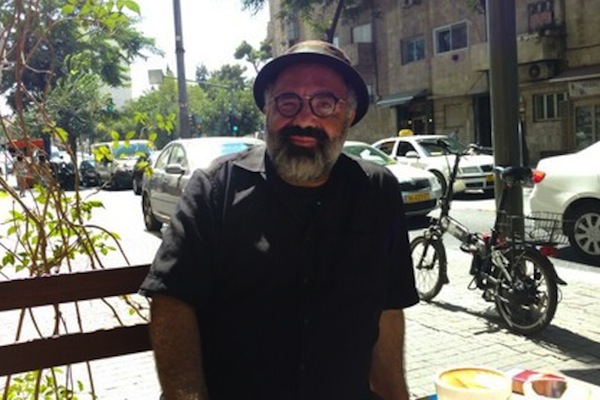 Before the Second World War, the Ukrainian city of Kovel was home to an significant and flourishing Jewish community. During the Nazi occupation, which lasted from 1941 to 1944, the Jewish population of the city was almost entirely annihilated.

Two men were primarily responsible for carrying out the extermination: Erich Kasner, the head of the local German administration, and Fritz Mantay, a German police officer. Twenty years went by before the two were located by German authorities and were put on trial for their crimes. The trial took place in the German city of Oldenburg and lasted 13 months.

“We Believed the Sun Would Rise Again,” the new film by Iranian-German director Farschid Ali Zahedi, looks at the the destruction of Kovel’s Jews, bringing its story to the big screen for the first time. Zahedi is a former political activist in Iran who fled the country after the revolution and was granted asylum in Oldenburg, where he runs a local cinematheque.

“I arrived in Germany in the middle of the 1980s. During my first years there I was very busy with issues having to do with Iran and human rights in general, while at the same time I continued to work as a cinematographer and began doing some directing,” Zahedi tells me at a Jerusalem cafe, following his visit to Yad Vashem, a day after his film was screened at Beth Volyn (named after the district in which Kovel is located) in Givatayim. “Later I founded the cinematographers and directors union in Oldenburg, which I still head today.

“Life in Germany caused me to become very interested in the Jewish history of the place, and I made a few films about the city’s Jewish history. I was mostly interested in the question of what happened to the property that they left behind when they were taken to the extermination camps. What happened to their homes, their writing tables, their clothing. I researched the issue and published a book, which won me new supporters and new opponents.

“Following the book and the films I received information about the Kovel trial by a woman named Nina who gave me a package of documents on the trial. I buried myself in them for a number of months, and felt the same sadness I feel about the fate of Iran. I do not want to compare between the two, but there is a human tragedy that one simply cannot ignore. A shared pain that has nothing to do with religion, nationality, or anything else.”

“I decided to look into the issue. A group of 15-20 people researched the topic for four years. We came to Israel an interviewed 20 people, 10 of whom were Holocaust survivors who are still alive. I traveled a lot between Israel, Poland, Ukraine, and Germany; we spent 60,000 euros from our on pockets, and read over 10,000 pages of documents. Perhaps if I had known what I was getting into, I would not have done it. But from the moment that I arrived here, began speaking to survivors, and seeing how they opened up to me and told me their stories, I felt I had a moral obligation to make the film.

“The story of Kovel is one that has hardly been told. Over the course of one week, 18,000 Jews were shot to death. The distance between the city and the execution spot is 15 kilometers. They were brought there on trains. Just imagine how many people were murdered per hour.”

You know, during my childhood in Iran I don’t remember the story of the Holocaust being talked about at all. Not even at the Jewish school where I studied.

“You’re 100 percent correct. In Iran they did not speak about the Holocaust even during the Shah’s rule — this is not something that began following the Islamic Revolution. There was a small layer of intellectuals who knew and spoke about it. Who knows, maybe if we were aware of this horrible tragedy, many of the crimes that took place after the revolution would not have taken place. But this isn’t only in Iran — even in Europe you will be surprised at the level of ignorance about the Holocaust. There are people who simply don’t know, and there are those who do not want to know.

“There are two countries that, against their will, still live the Holocaust: Israel and Germany. The Holocaust is present in both places, whether they like it or not. But even there some people have a hard time with this issue. At the screening in Givatayim I saw two young men in the crowd who were on their phones the entire time. They didn’t even look at the screen. And you know what? I understand them. The same thing happens among young Germans.

How was the debut in Israel?

“It was a very interesting experience. At the end of the screening two young women approached me and told me that their father, a Holocaust survivor, stepped out in the middle because it was too difficult for him to watch. And this despite the fact that the movie contains no graphic scenes of murder or death — I detest these kinds of images, out of respect for the dead. In this sense the movie is very “clean.”

It was an official screening, I did not speak much because I preferred the movie to do the talking. I was happy to see that the theater was almost entirely full. But I will tell you honestly that I made this movie, first and foremost, for my own soul, and in this sense I was willing to screen it even if only two people showed up.”

Who was the movie made for?

“Anyone who believes in the human experience. The movie is being translated into English, Hebrew, French, and hopefully additional languages. Not just for this movie, but every piece of art that seeks to break down borders and language in order to reach the widest possible audience. We are supposed to screen the film in a number of places in Germany, and today I went to Yad Vashem to look into possible distribution through the museum.

Throughout the entire interview Zahedi insists on his Iranian-German identity. It is important that I present him as such. The two languages are consistently present in our conversation: Between ourselves we speak in Persian, but whenever he turns to the Israeli friend who is accompanying him they speak German. Most of his family members still live in Iran. I ask if he can visit.

“Of course not! Even if I could, I wouldn’t go. Let me clarify: I am not angry with Iran. My entire family and all my memories are there. But as long as the horrors continue there, I cannot go. My father died a few years ago and I could not say goodbye before he passed away. That was incredibly painful.

“The first film I made told the story of a group of people who fled Iran after the revolution and came to Europe as refugees. I dedicated it to Sheida Behzadi, who was executed. Iran is my open wound, the one I cannot forget. Even if I make another hundred films in Germany, my identity is built on the Iranian tragedy, and specifically on the young people who were killed following the revolution. Many of my friends, political activists, were executed. They were shot and killed in Evin Prison, and then they would bury them in mass graves near Tehran’s Jewish cemetery. I grew up surrounded by this killing.”

Isn’t there something alienating about creating art in a different language? Don’t you miss the possibility of making art in your mother tongue?

I love Persian. I am really in love with the language. But there is another language that includes all of humanity, one that goes beyond concrete languages. The language of collective pain, the sun, love, The language of the painter is his paints, my language is visualization. I love this language.”