Pulling the U.S. out of the deal — or provoking Iran to pull out — would mean abandoning the least bad option for dealing with an Iran that can produce highly enriched uranium.

Abbas Araghchi was in London last week. Araghchi, one of Iran’s deputy foreign ministers, was a negotiator of the Joint Comprehensive Plan of Action (JCPOA), the July 2015 agreement designed to resolve international concerns about the nature and intent of Iran’s nuclear program.

Toward the end of an interview with the BBC on February 22, Aragchi was asked whether the JCPOA would “collapse if the United States [were] not part of it.” In response, he re-affirmed Iran’s nuclear non-proliferation commitment but hinted that a US withdrawal would provoke an Iranian withdrawal from the JCPOA unless Europe could ensure that Iran would receive the benefits due to it under the agreement — which he doubted:

We are not convinced that the deal can survive without the US. It is up to the other participants of the JCPOA to show and to convince Iranians that they can deliver JCPOA even without the US. This is not our understanding for the time being. If the US is out, we would also actually go out because there is no deal anymore…As we see, Europeans are trying to prevent that…We are prepared for every scenario which may happen….If there is no deal anymore obviously there is no restrictions in our nuclear programme anymore. Don’t forget that we agreed in the JCPOA to impose some restrictions on our nuclear programme for the sake of confidence-building for a period of time between eight years to 15 years. When these years are finished, it doesn’t mean that Iran is allowed to go for nuclear weapon. No, Iran would become a normal member of NPT by that time, after eight to 15 years of confidence-building measures. Iran would still be committed to its obligations and still obliged not to go for nuclear weapons….Iran’s commitment not to ever seek or acquire or produce nuclear weapons is permanent.

Was Araghchi depicting Iranian withdrawal as likely in order to encourage Europe to do its utmost to avert a US pull-out? That would be a classic tactic. But Paris, Berlin, and London have shown no sign of needing such encouragement. On the contrary, having failed to persuade President Donald Trump to take their advice more seriously than the counsels of those who pretend that the JCPOA is flawed, they have been searching for compromises to keep both the United States and Iran on board.

So it is just as possible that Araghchi meant what he implied: Iran will withdraw if the United States pulls out, or even if President Trump does no more than continue to deprive Iran of its full measure of benefits (by instructing the Treasury to withhold licenses and by stoking uncertainty in the business world as to his intentions).

One can think of reasons why Iranian withdrawal would amount to a self-inflicted wound. It would “make the day” of President Trump, his friends in Jerusalem, and his dancing partner in Riyadh. It would deprive Iran of a basis for building confidence in its nuclear program (unless Tehran were to continue volunteering the nuclear safeguards measures and the restrictions on its program for which the JCPOA provides). It would render Iran more vulnerable to disinformation about its nuclear intentions.

But withdrawal would not be out of character. In 2006, Iran reacted to a referral to the UN Security Council (UNSC) of safeguards violations by reducing International Atomic Energy Agency (IAEA) access to its program, and by acquiring uranium enrichment capabilities that lent credence to claims that Iran sought nuclear weapons. Tehran was convinced that the referral was unjust and held the other parties to an October 2003 nuclear agreement guilty of a breach of faith. For Tehran, allowing such injuries to pass unanswered was unthinkable.

President Trump and his advisers ought to ask themselves whether it is in the U.S. interest to run the risk of Iranian withdrawal. From the other side of the Atlantic, running that risk looks dumb. 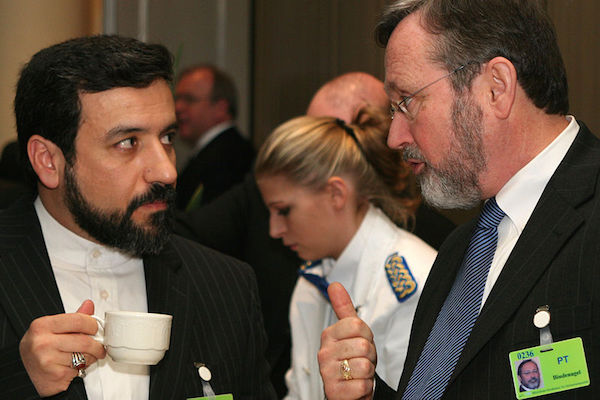 One of Iran’s options will be to dig out the 2006 playbook and start expanding its enrichment capabilities, using far more efficient centrifuges than were available in 2006. Before long, the United States will find itself back where it was when President Barack Obama decided that negotiating an agreement was his least bad option facing an Iran that could produce enough highly enriched uranium for a bomb in a few weeks.

This time, however, widespread sanctions on Iran will not be an option. Having pulled out of the JCPOA, the United States will be unable to activate the “snapback” provision of UNSC resolution 2231, Russia and China will veto a fresh UN sanctions mandate, and few if any US allies will see any justification for imposing unilateral sanctions on an injured party (Iran) at a cost to their economic interests.

Worse will be the impact of the JCPOA’s demise on the lingering desire of many Americans for a leading role on the global stage. In most parts of the world the JCPOA looks fit for purpose, not flawed. IAEA members and NPT parties see it as an agreement that allows the IAEA ample access to Iranian sites, including military sites when justified. Thanks to that access, the IAEA can verify the absence of illicit nuclear activity in Iran. These states can also see value in the program restrictions that Iran has volunteered, even if years ago they took the view that Iran is not seeking nuclear weapons and even though many of them treasure the right of all states to enrich uranium for peaceful purposes.

Will these states admire and respect the United States — will they be eager to follow US leadership — if President Trump causes the collapse of the JCPOA? Or will they see that as evidence of character traits that call into question the desirability of US leadership?

Worse still, there is no need to address the so-called sunset provisions of the JCPOA at this stage. The restrictions on uranium enrichment are only due to lapse between 2026 and 2031. Araghchi said in London that Iran will be open to discussing a follow-on agreement if the JCPOA turns out to have been a success (by which he meant, seemingly, if all parties will have respected their commitments). He also stressed that any expansion of Iran’s enrichment capacity after “the sun has set” will have to have a commercial justification: it will be to meet reactor fuel needs.

Climbing down is never easy. But the case for recognizing that it would be a mistake to pull the United States out of the JCPOA in 2018 — or to provoke Iran into withdrawing — is overwhelming.

Peter Jenkins was a British career diplomat for 33 years. His last posting was as UK Ambassador to the IAEA and UN in Vienna. Since 2006 he has represented the Renewable Energy and Energy Efficiency Partnership, advised the Director of IIASA and set up a partnership, The Ambassador Partnership llp, with former diplomatic colleagues, to offer the corporate sector dispute resolution and solutions to cross-border problems. A version of this article first appeared at Lobelog.com. Read it here.