The world may continue to circle its favorite conflict with hypotheticals and speculation, but to Palestinians the objective remains the same: to continue to build pressure against the occupation. 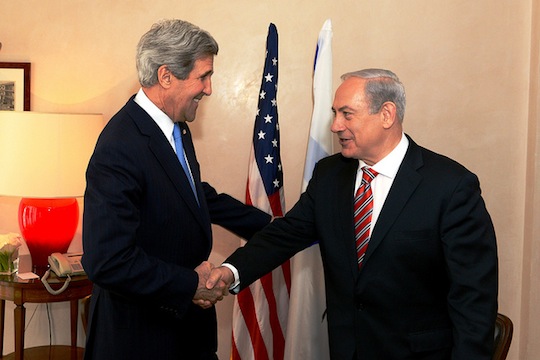 U.S. Secretary of State John Kerry meets with Israeli Prime Minister Benjamin Netanyahu in Jerusalem on April 9, 2013. (photo: State Department photo/ Public Domain)
It’s hard to determine what is less interesting: headlines about the potential resumption of peace talks between Palestinians and Israelis or the ensuing debates about what a solution should look like.

The cynicism on both sides goes without saying. But it doesn’t seem to inhibit the eruption of discourse on the subject. The whole spectacle is tiresome for a number of reasons, the most salient being that the conversation about what a solution will look like, what will be compromised and what will be granted, is entirely premature.

Moving beyond the traditional skepticism about even getting the two parties together, Israel is not in a position where it is compelled to surrender anything. In the absence of any real pressure, it continues to be unlikely that Israel, by its own volition, will address Palestinian demands with any seriousness. It is not simply a commentary on Israeli politics to point out this glaring fact; very few nations forfeit anything without at least some dimension of compulsion.

And for whom exactly does Mahmoud Abbas speak? A return to negotiations has already been rejected by significant segments of Palestinians, who continue to regard the U.S. as anything but an honest broker. The Palestinian Left has been clear on its position, with Popular Front for the Liberation of Palestine member Jamil Mizher commenting, “twenty years of absurd negotiations achieved a big zero, and only helped the occupation to execute its plans of expansion.” Islamists share the sentiment. Hamas and the Islamic Jihad both remark that negotiations will be detrimental to Palestinian objectives, their purpose being to help Israel save face. Fatah, Mahmoud Abbas’s party, even issued a statement demanding that negotiations be based on the ‘67 Green Line.

The point is not to dwell on the pessimism that already surrounds every aspect of the conflict. There is no Palestinian consensus that rejects peace talks or even a two-state settlement. Instead, it is to point out what many Palestinians already know: Palestinians are not in a position to be able to negotiate and Abbas is not in a position to determine what solution can be deemed acceptable. The simple fact that Abbas was not able to secure even a settlement freeze proves what a charade the whole thing is. The negotiations will bear no fruit. They are, to be clear, irrelevant.

Likewise, the question of what a solution should look like is not unimportant. It is simply too early and too costly to spent so much time debating final objectives. The arguments prove harmful for two reasons: they distract from the more pressing work of challenging the status quo and serve to divide Palestinian solidarity movements, pitting would-be political allies against each other. The Boycott, Divestment and Sanctions (BDS) movement wisely averts the question, ensuring that varied ideological factions can join together in engineering a context that will empower Palestinians, an imperative step that must precede conceiving resolutions. The movement does not endorse any one solution but instead emphasizes basic Palestinian demands including the right of return, the end of occupation and equal rights for Palestinian citizens of Israel. BDS has proved itself to be a much more effective tool for Palestinians than any diplomacy Abbas has engaged in, something that many Palestinians have taken notice of. They have also noted the achievements brought on by non-violent resistance; continued disillusionment with violence and diplomacy will only expand these movements.

Still, there is a fixation with hypotheticals, all the while disregarding that they cannot be realized without the continuation of the very real struggle that is happening today. It is argued that Palestinians need to be clear and vocal in their support for a two-state solution, that they need to stand behind Abbas in his relentless pursuit of diplomacy and that anything less can be equated with rejectionism. (It should be noted that this is an argument propagated by some Palestinians as well.) The logic holds some water until one conceives what would be gained, or rather lost, from going down such a road. Even if a settlement is reached, the result will almost certainly be a quasi-state that bears little similarity to the aspirations of most Palestinians. It isn’t about rejectionism. It’s about overcoming the delusion that Abbas would ever be able to secure a deal that the majority of Palestinians would approve of, a prerequisite that is oddly marginalized by so many Palestinian politicians.

The countless hours spent discussing peace negotiations, or what a final outcome should look like, may have some appeal to those who want to approach the conflict abstractly. But Palestinians understand that these questions are secondary at the moment. They distract from the important work being done to, at the very least, position Palestinians so that when they make unambitious demands like settlement freezes, that they are taken seriously. The world may continue to circle their favorite conflict with hypotheticals and speculation, but to Palestinians the objective remains the same: to continue to build pressure against the occupation. Afterward there can be talks.