I was recently in New York City and decided to visit the Jewish Heritage Museum in Battery Park (a Holocaust museum), as I had never been there, though I have been to a fair share of Holocaust museums in the world. As I entered the beginning of the permanent exhibit, I overheard a guide talking to a group of high school students. First she asked them: “Does anyone here know a Jew?” Only a few raised their hands, among them one of the grown-ups. Then she said: “Jews come in all shapes and sizes,” right as I walked by them and I had to hold back my combination of laughter and dismay. 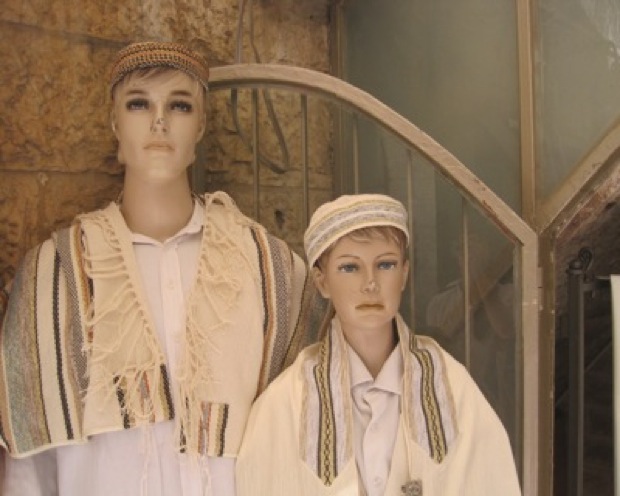 Jewish manikins in Old City of Jerusalem (Photo: Mairav Zonszein)
Obviously such a statement is disconcerting, as it should be obvious that Jews are just people. But in the setting of a Holocaust museum, it is expected that Jews will be talked about in this manner. This is part of what I see as so tragic about the Holocaust’s effect on Jewish identity and life: it necessarily places the Jew in a special role as mystified victim of an offense of epic proportions. It allows the Jew to be fetishized, as indeed Nazism’s obsession with exterminating Jews reflected an excessive compulsion that can be seen as a fetish. And just as hating the Jews is a fetish, so is loving them, singling them out for greatness – a condition sometimes called philosemitism.

With the creation of Israel as a serious effort to respond to the “the Jewish question” in modernity, this fetish is inevitably preserved. Some people love to love Israel because of how glorious an achievement it is in the context of the historical discrimination of Jews, and some love to hate Israel because it is capable of such discriminatory and oppressive policies, and often uses the Holocaust as some sort of justification. Either way, there is an obsession with Israel that has in certain ways replaced the obsession with the Jew – what I see as the “Israel fetish.”  People love to talk about Israel, whether positively or negatively, and it is propagated by Israel itself as well as by the world, or at least the West and Middle East.

Examples of Israel fetishism can be seen all over the media on a daily basis, in the very fact that the media loves to cover the issue all the time. One example is the recent news item about the UN General Assembly’s plan to screen the movie Miral. The movie is directed by American Jewish artist Julian Schnabel and is about a Palestinian girl from East Jerusalem. The Israeli delegation to the UN has complained over the matter, deeming the movie to be one-sided since it shows IDF brutality against Palestinians. It also pointed out that it is not customary for the UN to screen a commercial movie in the General Assembly, which is really the issue. Indeed I think it is peculiar that the UN is screening it (especially after watching the trailer for the movie, which struck me as artificial and cheesy).

Why is the UN screening this movie, and why is the Israel delegation making such a big deal about a movie that doesn’t even look good? And why is this major news in Israeli papers? There is a hyper-infatuation with Israel’s image, and this has only been bolstered by its protracted conflict with the Palestinians – who are also obsessed over as the new ultimate victim.

This deep romanticism has taken over. In the continued bloody conflict between Israelis and Palestinians, there is a dramatically romanticized battle over the defeated. And every time one side is victimized, there is an opportunity to glorify that victimhood.

Here is a great clip from an interview with Mahmoud Darwish, from Godard’s Notre Musique: