How the British Board of Jewish Deputies and its allies are smearing a decent critic of Israel as an anti-Semite – and the success they’re having. 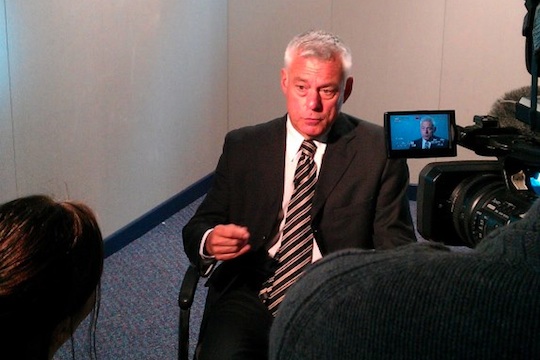 The view in Israel of British Jewry is that they’re cowed by traditional British anti-Semitism and running scared from the “Muslim takeover” of the country. They’re not as chutzpahdik as the American Jews, supposedly. But I think Israel is selling the British Jews short, or at least their leaders. For the last month, the country’s Jewish machers have been smearing a member of Parliament as an anti-Semite with the sort of cynicism and relentlessness that could make their American counterparts envious. Chuck Hagel, meet David Ward.

A month ago, on the eve of International Holocaust Remembrance Day, Ward, an MP from the Liberal Democratic party, posted this statement on his website:

Having visited Auschwitz twice – once with my family and once with local schools – I am saddened that the Jews, who suffered unbelievable levels of persecution during the Holocaust, could within a few years of liberation from the death camps be inflicting atrocities on Palestinians in the new State of Israel and continue to do so on a daily basis in the West Bank and Gaza.

Does that sound anti-Semitic? To the Board of Deputies of British Jews, the Jewish Leadership Council and other stalwart communal bodies, it most certainly does. They immediately seized on Ward’s use of the term “the Jews” to accuse him of being an anti-Semite, and since then have been pressuring the Lib Dems to teach him a lesson. The party has obliged, chastising Ward publicly and ordering him this week to consult the party’s “Friends of Israel” organization to “identify and agree [on] language that will be proportionate and precise” when speaking out on the Mideast conflict, according to yesterday’s Jerusalem Post. (Note: In its properly outraged coverage of this story, the Jerusalem Post has taken to omitting Ward’s opening phrase, “Having visited Auschwitz twice – once with my family and once with local schools,” when quoting the statement from his website. Wonder why.)

Ward, an MP from Bradford East and a member of Parliament’s Britain-Palestine caucus, has been pretty defiant. While taking pains to say he didn’t mean to offend Jews, he’s stood by his statement about Israel. When Sky News suggested he was blaming Jews in general for Israel’s treatment of Palestinians, he replied:

He went on to tell The Guardian:

There is a huge operation out there, a machine almost, which is designed to protect the state of Israel from criticism. And that comes into play very, very quickly and focuses intensely on anyone who’s seen to criticize the State of Israel. And so I end up looking at what happened to me, whether I should use this word, whether I should use that word – and that is winning, for them.

The British macherdom is not amused. The Deputies and Leadership Council rebuked the Lib Dems for “a pedestrian and lackluster response to what amounts to anti-Semitism at the heart of parliament.” The Holocaust and Educational Trust said, “This is a disappointing response to Mr. Ward’s sickening and unacceptable comments which he has kept on his website.” The affair isn’t over, either. Jerusalem Post: “The Liberal Democrat party said a date will be fixed to review Ward’s progress in an effort to conclude the disciplinary process against him.”

So don’t let anybody tell you British Jews won’t stand up and fight; the leaders of the Jewish “defense” organizations, at least, will fight as nasty as they need to.

The statement Ward made on his website, which he wrote after attending a Holocaust memorial ceremony in Bradford, contains not a nanogram of anti-Semitism. He was talking about the Jews of Israel who were responsible for the Nakba and those who later became responsible for the occupation. (I think he was awfully one-sided about the Nakba – there were massacres and ethnic cleansing of Jews as well as of Palestinians in the 1947-48 war, which was initiated, even if understandably, by the Palestinians – but that’s a whole other thing from anti-Semitism.) And what he told the Guardian about the “machine” that intimidates British public figures from criticizing Israel has obviously been proven true.

It’s an old story, it happens in the United States, in France, in Britain – the established Jewish defense organizations take a nationalistic view of Israel, and have few if any qualms about exploiting the suffering of Jews in the past as a shield for the suffering Israel inflicts on the Palestinians. It’s so demoralizing: Jews used to stand with the weak, now they stand with the oppressors of the weak when the oppressors are their own. And the memory of the times when Jews were weak – which we aren’t now, not in Israel or the Diaspora – is their best weapon.

I’m not talking about Diaspora Jewry in general, who remain disproportionately involved in human rights causes. I am talking about the recognized Diaspora Jewish leadership, the AIPAC types, the Board of Deputies types. By defending Israel’s subjugation of the Palestinians, especially by conscripting the Six Million to do it, they betray Jewish history. It is MP David Ward, in this episode, who honors it.