The story takes a southern turn, as Yuval heads into the desert for a possible rendezvous with an elusive star, and has disturbing thoughts on the way. 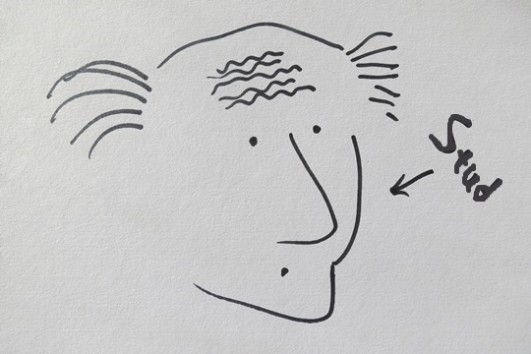 And so I was left with no choice. I had to travel to a freezing desert plateau, where I would chase Mira Awad and try to make her change her mind.

The way to Sde Boker by public transportation begins with a 70-minute train ride to Be’er Sheva. At Tel Aviv’s Hahagana station I bumped into another traveler headed for the same poetry festival. It was quirky Israeli electro-pop musician Yael Birenbaum, the bespectacled leader of the uber hipstery band Jack in the Box. I described my mission to her.

“So you’re going to make a move on Mira Awad?” she giggled.

“I guess you could say so, but I also brought some olives, and good Turkish cheese and a bottle of whiskey.”

“Why?” she snickered, “so you can seduce Mira Awad?”

“No, stupid! So you and I and the other poetry people can sit around late at night and shoot the shit.”

I have been attending the festival religiously for years. Yael is always there and I have learned to take her humor with a grain of desert sand. Still, while watching the rainy suburbs thin away through the train window, I couldn’t help but muse over a concept I have hitherto kept out of my thoughts, for obvious reasons. It was the concept of eroticizing.

The awkward situation at the Willy Brandt center played out much like a failed date. It was enough to make one wonder: what was the role of Eros in this story? Was I eroticizing Lorde? Now, there was a disturbing thought. She was so young! I supposed she was a fantasy, though less my own than of my frequently-infatuated high-school self. Glorifying her was a sort of emotional and intellectual time travel.

What concerned me more was the idea that I was eroticizing Palestine. To me, the power structure in the country reads a lot like a severely abusive relationship. Both spouses are violent, but Israel is the physically superior, controlling one — the one with the key to the basement. This is traditionally a masculine role. I did not identify with my nation’s behavior, I fought against it, I sought to rescue the damsel in distress. In other words: I have internalized the gender code.

All the Palestinians we have approached so far — Hanin, Luna, Mira and Rasha — were women. Husam advised me to involve a man named Tamer. That same Tamer was present at the Wily Brandt center event. He turned out to be involved with Heartbeat. I gave him a big hug but mentioned nothing of the project. I love Palestinian men. I love Husam as well as Aziz, who started the dual narrative tours. I love Tamer too, but for this creative project I was seeking women, so that we may give birth to the album together. I was trying to make this into a love story, in which I am the man.

This was dangerous. I have read enough post-colonialist theory to know how sad this attitude is, and how ill are its roots. For centuries the West has objectified the Arab world, feminizing it to fit a fantasy of control.  ‫I would have to somehow snap out of this paradigm and go through some sort of political gender reassignment procedure. But how in the world is that done?

At dusk we stepped off the bus at a lonesome intersection, engulfed by the dark wasteland, and made our way towards the lights of the Sde Boker boarding school. Israel’s first Prime Minister, David Ben-Gurion, is buried here next his wife Pola. Their headstones jut out from a clifftop above a stunning canyon, and the rest of the school’s structures huddle only a few steps away from the ravine.

It was too dark already for us to enjoy the splendor, yet too quiet to feel at home. Everybody was at some poetry reading in the main conference hall, so we went and checked into the guest house. On the wall facing reception was a photo of Ben-Gurion, gray-haired and iconic, a desert landscape behind him. “What a stud,” Yael remarked.

I rushed to the auditorium ahead of Mira Awad’s performance. I was tense, knowing I would have a fleeting opportunity to present myself to the star of the evening and renew the offer. I walked among the sleepy dormitories toward the well-lit auditorium. A crowd began to gather inside. Outside, leaning on a post and smoking a cigarette, was a woman who greeted me with the warmest smile. It was Ravid Sevil, who works as the show manager of Jaffa theater. I’ve known her for years, both because I use to write theater reviews, and because she’s just straight up cool.

Then it hit me. The play about Palestinian poet Mahmoud Darwish was a Jaffa theater production. “I need your help,” I told Ravid, “I need to meet Mira Awad.”

“Oh, you’ll meet her,” she smiled, pulling out a cigarette to share with me.

Incredible. This meant that within two hours my job will be done and I will run out of things to do in Sde Boker. I had no patience for the poetry; I was here for Lorde. “Are you driving home tonight?” I asked.

“There’s no room in my car, but you can take a lift with the cast.”

Right then the cast arrived, bearing their musical instruments. Ravid introduced me to the cheerful, fair-haired Mira Awad. I told her I was Yuval from the Lorde project. There was no time for any more chat, as they were all a bit late, but there would be so much time later, two hours at least, on the drive to Tel Aviv.

I had just sworn to avoid any thought that hints at objectifying, but simply could not ignore the beautiful symbolism: Ravid was the daughter of Turkish Jews, and hence a Mizrahi. Faithful to her community’s bridging potential, she allowed the Ashkenazi Jew and the Palestinian to meet.

Between Rita and my eyes

Having sucked on the cigarette, I ran back to the guest house to fetch my bag before returning to the auditorium, where a silver-haired professor was analyzing Darwish’s poetry in Hebrew, as a prelude to the play. He talked about Rita, the subject of many Darwish poems. “The Palestinians describe Rita as a metaphor for Palestine, but this is of course untrue,” he said, “Rita was a real woman, a blond Israeli kibbutznik. Darwish would make great coffee in his Haifa apartment, and many women would come up to enjoy his coffee. Rita was one of them. This reminds me of how rabbis describe the ‘Song of Songs’ as an allegory about the Jewish people and the torah. Of course the Song of Songs is not about the torah — it’s a collection of erotic poetry.” I believed that Rita was a real woman, but that did not mean that she couldn’t also be a metaphor. When her name came up again and again during the performance, at times sung to Mira Awad’s guitar, I kept thinking that she could be a metaphor to either Palestine and Israel, or both. “Between Rita and my eyes is a gun”, Darwish wrote. I knew that gun.

If Rita was Israeli, and especially if she represents Israel in some of the the poems, then Darwish succeeded at reversing the gender roles. This was more than I ever expected of poetry. This festival has been a smash. I was ready for the ride back home.