The final chapter, in which we make music. 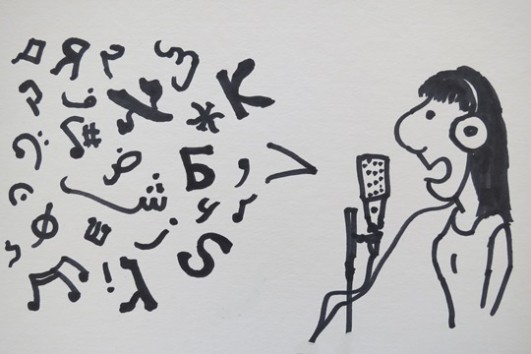 “Yuval, what is your time limit?” Khader asked me online.

There was a time limit. The spring’s succession of guided tours was supposed kick off in two weeks. Once that happened, I would have no more time. “Why?”

“Because Rasha only comes back on March 23rd, and she really wants in.”

“In the U.S., making friends with Uncle Sam”.

“Okay,” I wrote, “I’m going to talk to Yaron. Our deadline is March 7th, but I think we’ll stretch it for her. Listen,” I added, “I am really, really, really moved that you made contact with her and that she agreed to participate. She’s an amazing artist.”

Yaron was fine waiting. He is easy to appease. Ruthie and I walked over to his house that Wednesday for Shira’s session. She arrived with her husband, Alon, and his accordion. Together, they form the Yiddish duo “The Technicalities.” When the two of them entered, I realized that I had not seen Shira since the whole thing began, more than three months back, and who knows how much longer before that. She has been working the entire time on her countless endeavors.

“I have totally fallen in love with this song,” said the former Lorde-skeptic, which was nice to hear. She even kept referring to “Team” as “the song we all love.” “In essence, it’s an eighties song,” she said, “that’s why we all love it.”

This turned out to be untrue. Not everyone in the room loved “Team,” because not everyone knew it. Yaron staunchly refused to listen to any of the original tracks, put together by Lorde and Joel Little, so that he won’t be tempted to emulate them. It occurred to me that his first encounter with “Team” would be in Yiddish, the so-called dying language of European Jewry, the tongue of my grandparents and their gassed-to-death family members. Yiddish, the thick and sweet German brogue of folk tales and secret modern masterpieces, the tongue of Meah Shearim’s children, who seem to grow up in another era. Team, by Lorde, in Yiddish. This was kind of cool.

The following night was cooler still. Diana Gern, the Russian soprano, came to record “Yellow Flicker Beat”. I love all things Russian that are not politicians. Russian-Israelis were always the local subgroup with which I most easily connected. Over the years, my former-USSR chums have showed me “Hedgehog in the Fog“, fed me shuba and lent me “Moscow-Petushki.” They turned me into a proper Russophile. The nearest to the Lorde madness I experienced in recent years was losing it over Tchaikovsky.

Diana came with a delightful problem that is telling of Russian temperament. The title line, “red, orange yellow flicker beat / starting up my heart” was too beautiful in her eyes. She felt that the word “ognia” (“fire”, chosen by Vladi to stand in for “flicker”), deserved more room and asked if we would stretch the line to emphasize it. I preferred staying faithful to the original, and assured her that her natural passion would deliver all the beauty.

I got to play the guitar. I haven’t written much about the musical side of jamming with Yaron, but he is a bit of a Mr. Miagi. He will throw a mandolin at you and make you play it, or throw a word like “fermata” at you, forcing you to figure out what it means. I am so much more of a musician now than I was when we had that Malawach in November.

Having turned off the mic, Yaron drove Diana and myself to the city center. I fell asleep content and woke up thrilled, caught up on all the writing and illustrating, then took a walk to the beach.

Part of the sand was dug out, for renovations of the promenade. That portion of the beach was fenced. Here was the westernmost fence of a land full of fences, walls and invisible boundaries. Some separate physical spaces, others seperate people, some are imposed on us, other we simply adopt. Some can be climbed, others bypassed. Some are impenetrable, but we never knows which, until we try, right?

Beyond this final barrier were the Holy Land’s final few steps, then the vast sea, and beyond it: Rasha, chatting with Uncle Sam. It would be an honor to wait for her, though I never expected a wait. In the end, nothing played out as I expected. Two Mizrahi girls contributed the project’s most European track. The one Palestinian-spirited song turned into a Russian ballad, while our Arabic track was an easygoing stoner hum.

When we realize things aren’t as we hoped, we come to the beach and look away, to the world, often to the west, hoping for good tidings that might stir change. It’s our natural position, and a good place to end this tale. But I cannot conclude without turning south-east, (though it is nearly the same distance facing south-west, by a wide arc) and sharing a few words.

Israelis are not best known for being polite. We often make fun of our own disregard for the words “please,” “sorry” and “thank you.”

Even now I will not use them all. There is nothing I could ask of you, so “please” is out. “Sorry”, on the other hand, you probably deserve. People around the world flaunt your name for whatever their weird causes are. It’s part of stardom, yet surely isn’t always fun. If I caused you any discomfort, I apologize.

Now the “thank you.” At its best, art makes us conscious of what was there to begin with. Yours made me conscious of your generation’s experience, of your native land, and of many less-easily articulated notions involving rhythm, rhyme and dance.

Poking my head into contemporary fandom, I also grew conscious of gossip and pettiness. I found great writing about your work, but so much talk of appearance and other trivial matters. I guess I hoped to counter that with some substance. My land is full of substance. All I needed to do was aim the loudspeaker to its hills and press play.

The hills returned an echo. I became more conscious also of what was here to begin with. Staying focused on this country’s realities and fighting the good wars (rather than the deadly ones), is impossible to do without good, authentic art. The art you and your creative partners bring the world is such. It helped me and my friends see all of it afresh, and perked all of us up a bit for what is yet to come. Thank you. We needed that. 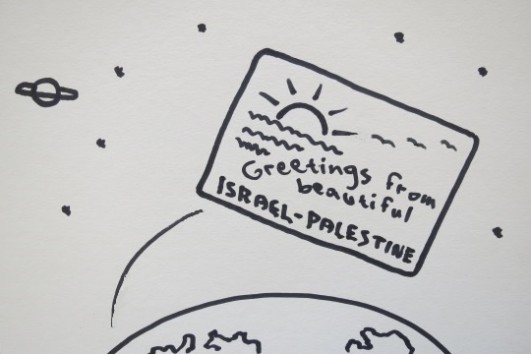 I’m also grateful to the brave editors of this series in its English form, Mike Schaeffer Omer-Man and Edo Konrad, and to everyone who gave a hand in any way, whether by playing the cello or suggesting Tamer. As for you, dearest readers: Thank you so much for coming along on this strange ride. The first songs are being mixed by Yaron as I write this, and more will pour in later. They will be published in a separate post. Till then, enjoy, and may peace and music reign wherever you are.