Between general despair and out of fear of offending the anti-normalization movement, the project moves on and Lorde makes an unlikely fan.

Read the previous chapters of The Israel-Palestine Lorde Diaries’ here. 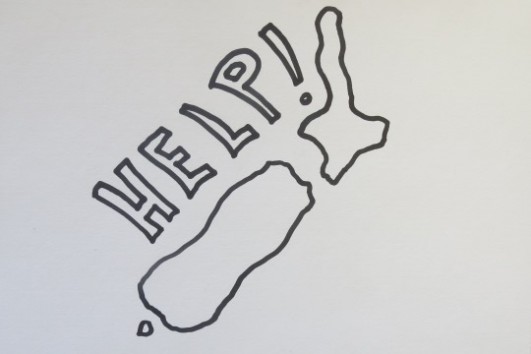 More than a week has passed and I haven’t heard from Hanin. I figured we need find another translator. Meanwhile, Jewish-Arab partnership in this unholy land received a major blow. Vandals set fire to Jerusalem’s “Hand in Hand” school, one of a tiny handful of bilingual schools in the country. The arsonists turned out to be activists with “Lehava,” the same organization to which I dedicated my version of “Team.” They piled textbooks in the middle of a first grade classroom to make their initial bonfire.

I traveled over to Yaron’s apartment to record some more of my own music, but we ended up doing two translations. One was “Te Recuerdo Amanda” by Chilean legend Victor Jara; the other, “It’s a Hard Life” by country songstress Nancy Griffith. Both Hebrew versions alluded to the rotten realities of home. The factory boy in Jara’s song turned into a Palestinian political inmate. Griffith sings of barbed wire strung along Belfast’s Falls Road. I replaced it with the concrete of our separation barrier.

The following day I came within sight of that wall, guiding a group in Jerusalem (that’s my day job). Once done, I wandered through pleasant wintertime West Jerusalem, thinking of the tours that were canceled following the summer’s war, about the school arson and the upcoming elections.

All these things are tied together. Lehava’s existence is no fluke. Our leaders busy themselves with fear-mongering and sowing alienation. Their hate speech bears fruit, producing fire and drawing fire. Jerusalem had been near the point of combustion for a few weeks now: Palestinians murdered ultra-Orthodox worshipers at a synagogue, possibly seeking to avenge a Palestinian boy, who was burned alive by someone who’s father attended that synagogue. The murder of the boy was itself described as revenge for the murder of three settler kids, and so on, infinitely.

Privately executed animosities are answered by systematized ones. Entire neighborhoods in Jerusalem were closed off and put under extreme surveillance by the paramilitary corps that controls the lives of Jerusalem Palestinians. Attackers ran over passengers at light rail stations, while police sprayed schools in East Jerusalem with putrid water, seeking to intimidate the populace and offset the community’s routine. In the midst of all this horror, dubious elections were announced, forcing us to look away from the issues and focus on the egos of politicians.

What could my goofy Lorde project possibly change? It can only provide escapism. Crossing the light rail tracks on my way to happy hour at the Sira pub, I thought back to a Hebrew poem and Googled it on my phone:

It was “New Zealand Has Two Islands,” composed by the late Dalia Rabikovich during the First Lebanon War. I nodded at the last verse:

There’s no point in hiding it:
We are a failed experiment,
A plan gone awry,
Involving too much murder,
What have I in common with any of those?
They yell ’till their throats are sore,
Split hairs at their tip,
In any case, too much murder.
I will not travel to Africa,
Nor Asia.
I will not travel at all.
In New Zealand,
Amidst the grass and water,
Good hearted people,
Will break their bread with me.

I have never been to New Zealand. I wondered how bad things ever get between Europeans and Maoris down there. Do they get bad? I peeked back at my phone. Hanin wrote. She offered up her sister for the challenge, to translate five songs, including “Royals” and “Team.”

Forget EP, I thought, We are headed for an album.

The Sira, a proper Jerusalem pub with thick stone walls and a beautiful resident ginger cat, is such a nice spot that I only made it onto the “sherut” minibus late at night. These minibuses only get moving once 10 passengers pile in. It was 1:00 a.m. when I arrived and only one passenger was seated inside, a Hasidic Jew with side-locks down to his chest. It didn’t look like we would head out before three, which meant I wouldn’t make it to my Tel Aviv home until four.

“Play us something,” the sherut’s driver pointed to the case of my small, portable guitar. I brought it along in order to play for the group, and forgot all about its existence. I asked him what song he likes. He said: “Yesterday.”

“Yesterday!” The Hasid mumbled out of near slumber, “it’s by those guys… What are they called?”

I held my breath. Jerusalem’s ultra-Orthodox frown even more severely at mainstream media then do their brethren abroad. Would someone who grew up in such closed society really know… 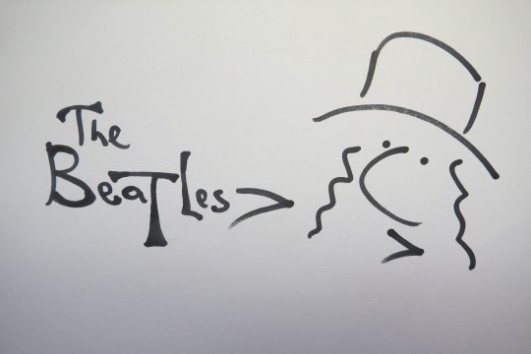 This was simply too cool. I pulled out the guitar and strummed Yesterday for the both of them. The driver nodded in approval, then stepped out for a smoke. The Hasid asked me if I could play any “Haredi music.” I gave him “Veha’er Eineinu” by Rabbi Karlebach. It was close enough; he sang along.

Now it was time for the real thing. It is forbidden for ultra-Orthodox Jewish men to listen to women singing. In order to become Lorde fans, they need a mediator. “Let me play you something,” I said. “It’s by a really spectacular artist, a young woman. I translated. It’s about preferring the simple things in life over material fantasy.”

The secular-Haredi divide in Israel is just as pronounced as the one separating Jews and Arabs. This was truly a rare moment, and I was moved: moved to be playing my folky, Hebrew version of Royals to this gentleman, moved that he listened so intently, and lastly — I was moved by his response. He only said three words, but they were put together with care — old fashioned, rabbinical. He said: “she possesses depth.”

Back in Tel Aviv, I bought a sketchpad and a marker for illustrations, set down at my desk and began putting this real-time account together. While writing, I chatted with my old friend Anat and told her of the project.

“You should get the hunk from ‘Mashrou’ Leila’ to sing with you,” she suggested.

I really love Lebanese band Mashrou’ Leila. I would have loved this better than anything else, but it of course was not to be. “Here’s an issue for you,” I wrote, “anti-normalization.”

Not being an activist, Anat was not familiar with the term. The anti-normalization movement initially opposed any activity that would create a false sense of normalcy and of false equality between Palestinians and Israelis. The activists claimed that things here are not symmetrical. One nation is holding another oppressed, which can easily be forgotten when Mira Awad and Noa stand together on the Eurovision stage.

Over the years, the movement has radicalized. Today its activists tend to oppose any cooperation between Jews and Arabs, regardless of what view it presents. At times, the anti-normalization campaign has even opposed cooperating with Arabs who came in touch with non-Arabs who came in touch with Israelis. “Two years ago they called to boycott Mashrou’ Leila,” I told Anat, “because Mashru’a Laila was scheduled to open for the Red Hot Chili Peppers in Beirut, and the Chili Peppers played Tel Aviv on the same tour.”

“Got it,” She wrote, “what a plot twist, Israel as a contagious disease.”

“So who are you going to sing with?”

I have made up my mind about one thing: “I won’t be singing with anyone, and yes, it’s out of consideration for the anti-normalization issue. For me this project is all about complexities. They keep arising and this is why I’m chronicling the entire thing. But others might see it differently, so once we get behind the mic, the Hebrew songs will be recorded in one session and the Arabic ones recorded separately. No duets. It’s not going to be encouraging. It’s simply going to be.”