Ironically, it’s a break from music-making and partner-searching that produces a first duet, and with a very special musician, too. 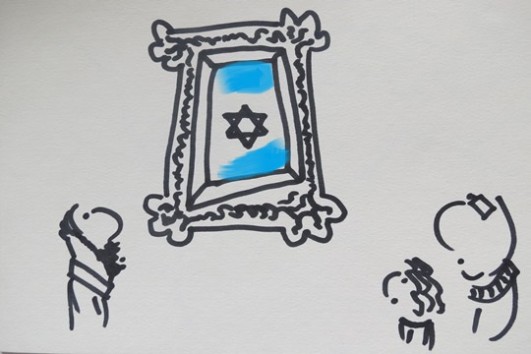 On the fifth morning of the tour, after having breakfast at the group’s Jerusalem hotel, I climbed aboard the bus and found that we had a young guest. It was Husam’s 12-year-old daughter, Mayar. He explained that school is still out for the winter holidays. He thought it would be nice to take her to the Israel Museum with us.

At first I was amazed to see Mayar on this side of the wall. Her father, I knew, could travel through freely thanks to his job as a tour guide. He is one of about 5 percent of West Bank Palestinians who have permits to visit Israel. Often he is held up at the checkpoint in the mornings, but usually makes it through. Mayar was no tour guide, however. I soon remembered that she is a “Jerusalem Palestinian,” thanks to her mother, and therefore a bit more legally empowered. Besides, she is too young for travel limitations to apply.

She had never visited the museum before, and the group was about to explore it on its own so I offered myself as private guide. I was thrilled for the chance to show a West Bank kid around this bastion of Israeli culture. Mayar is a history buff, so first Husam and I took her to the archaeology department but we ended up discovering impressionist art as well, and even visiting the historical synagogues that were brought here from around the world.

I remember Husam speaking of his children to one of the groups. “I do all I can to prevent them from hating Israelis,” he said, “I introduce them to my Israeli friends, I show them that they are kind people, but I know that when my kids grow up, all of this will be useless. They will hate Israelis. My daughters see every day how the soldiers treat their mother at the checkpoint. They don’t treat her as a human being.”

My war against this young girl’s disdain was futile, but I was fighting it in style, with the help of Van Gogh.

We got back to the bus, ready to head out of town to Jericho, the Dead Sea, and beyond, I asked Husam how Mayar was going to make it home. “She isn’t,” he said. “She’s joining us for the rest of the trip.”

I couldn’t dream of better news. There’s only so much Van Gogh can do in one day, but four days could make a difference. It made sense, too. We don’t often have kids along on our tours, but this time two couples brought their children, and both were 12-year-old girls. The girls reared from different backgrounds. One was a West Coast Asian-American, the other, a blonde Georgian with a drawl. I was hoping Mayar would help them bond, and my wish came true. Watching the three girls form a cross-continental friendship, transcending all cultural and linguistic barriers, was beauty incarnate.

One day, while the bus cruised the hills of the Galilee, north of Nazareth, I pulled out my tiny travel guitar and called the girls attention. Interrupting a game of Uno in the back seats, I dedicated a song to them. It was: “We are never ever getting back together,” by Tailor Swift. The three reacted shyly at first, but soon moved to the front seats. Mayar then joined me for a duet of “Royals,” and finally all three taught me a song from “Frozen.” 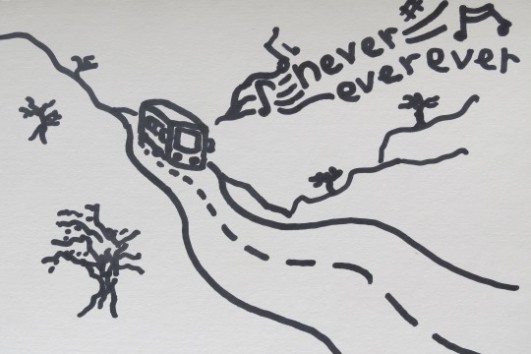 Thus, the first Israeli-Palestinian Lorde duet was sung. It did not happen within range of Yaron’s microphones, but it happened, in front of a supportive audience of 25 Americans. Mayar knew about 40 percent of the lyrics, which is a lot in my book, and for the first time in my life I found myself truly grateful for global culture.

Rolling Stone‘s first review of Lorde’s album opens with a comment on zeitgeist: “New artists in 2013 don’t come any ‘2013’-ier than Lorde,” wrote critic Jon Dolan, “Ella Yelich-O’Connor is 16, but she could be 25. She sings tough and raps soft. She’s from New Zealand, but she could just as easily be from Tampa or Glasgow or Dubrovnik.” Mayar is from Bethlehem, but she could be from Atlanta or Buenos Aires or Auckland’s north shore.

Globalization, that demon which I vowed to fight to the death when I was Lorde’s age… Now it manifested itself as a promise, at least here. There’s so much that separates us: language, religion, a concrete wall and how we drink coffee. Political dominance makes up the most pronounced difference: I have rights, Mayar and Husam practically don’t. I am a citizen, while they live under military rule. In order to defy the system that categorizes us so cruelly, that seeks to turn us into enemies for its own good, we must focus on what makes us alike, and here is what makes us alike: we can sing Royals.

I came home to news, bad news. Mira Awad said no. Following a week of silence, Yaron followed up. She wrote him that she doesn’t have the time.

Ruthie agreed that my emails scare people away, but not because of the phrasing. “They would scare them no matter how you put it. The Palestinian artists hear ‘Lorde’ and are keen. Then then realize that questions of identity and community are involved, and scramble for a way out. These are tense days. No one wants to be on the wrong side politically, and any side is the wrong side.” She suggested that next time I should call the candidate on the phone. A vocal exchange would allow the other side to express doubts, and for me to calm them.

The weather turned. A storm hit the region, bleaching Damascus,  Amman and Jerusalem with snow, and pouring torrents of hail over Tel Aviv. Ruthie came down with a sinus infection. We spent a lot of time at home, listening to jazz — particularly to Ornette Coleman,  playing GeoGuessr and eating soup enhanced with spoonfuls of Marmite. Our friend Daniella dropped by for some of the latter. She heard my story and quickly snickered.

“So basically you’re saying that you and another Israeli are trying to put this thing together, but no Palestinian would cooperate?” she asked.

“And doesn’t that mean that, you know, that there is no partner?”

There it was, That old Israeli cliche.  I let Daniella get away with it. She buys her Tahini in Nablus. She was being cynical. “I don’t blame them,” I said, “I wouldn’t play with rich kids who steal my lunch money, especially if I felt that it would make them feel better about themselves.”

“Figures,” said Daniella, “By the way, did you think of writing Lorde about all of this? I think she’d get a kick out of it.”

“Lorde is busy,” I said. “Plus, this is nothing special. People make translations and covers of her music all over the world.”

Maybe too different, I thought. Here is the real reason I was not going to send any of this Lorde’s way: the worst thing anyone could do to another person is to implicate them in the Gordian knot of Middle Eastern politics. Lorde is a real person and her production and publicity team is made up of real people. None of them must ever have to answer to any of this, unless they choose to.

Proper winter is so lovely when it finally gets to Tel Aviv. It helps the spirit forgive the Middle East for its knot. It empowers. I had to win this. I knew exactly why no one wanted to partner with us. I knew how ridiculous we seemed and that this is how ridiculous we actually were, but I was in too deep. We had to find a partner.