Two nights in Jerusalem bring many a new acquaintance, and make things seem so much simpler— or complicated. 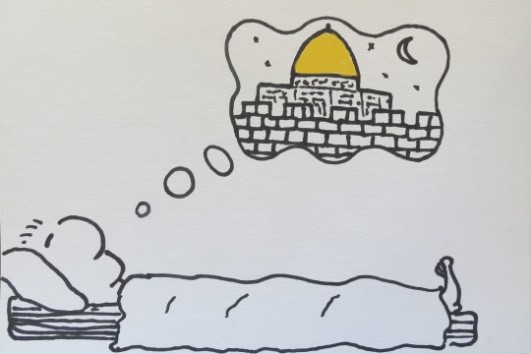 Winter was only getting more severe, which presented a dilemma. Being a poetry lover, I head south each year for a poetry festival held in the heart of the desert, at the Sde Boker boarding school. This year I contemplated skipping. Sde Boker is perched atop a steep mesa, overlooking a dramatic canyon and is perfectly exposed to desert winds that can be vicious when winter is earnest. The poets are put up in rooms that often lack windows and where the heating rarely functions. Why would I do this to myself?

On the other hand, I heard that Mira Awad was due to perform there, in a theater play based on the poems of Mahmoud Darwish. I could brave the cold and try and have a word with her. This could prove a very false step. I may never reach her there. I could end up traveling hours into the frozen desert for an awkward moment that would result in nothing. Was the gamble worth it?

I had a whole week to contemplate, and it was a busy one. On Monday I attended a Jerusalem Kiwi gathering. Michelle (the guest on our New Zealand radio program) invited me to meet a group of school teachers who came for a program at Yad Vashem, Israel’s Holocaust museum. I also got to meet her super-sweet, Wellington-born mother, Sue, who is aware of my obsessions and brought me some Marmite from the old country. “Keep the ziplock bag, too,” she offered with a wink, “It’s also from New Zealand.”

While we waited for the teachers around a table at “Mike’s Place,” Michelle told of the annual gathering of New Zealand expatriates in Israel. It takes place at Kibbutz Yizrael, up north. “You haven’t seen anything,” she said, “until you’ve seen a bunch of Polish and Hungarian Jews whose families left Europe before the war standing in the heart of the Middle East, which is where they ended up, doing a Haka in piupiu skirts.”

The teachers were exceedingly sweet and very curious about the living politics of the region. I ended up playing the radical outsider to Yad Vashem’s Zionist narrative. We had a few pints and then headed for an after-hours walk in the Old City. At the Wailing Wall I told them, among other things, that they may see people stepping backwards from the wall, so as not to turn their backs on it. A Maori member of the group told me that Maoris treat the ocean with the same token of respect.

I left Jerusalem even further enchanted with New Zealand. Those kind people from the poem by Dalia Rabikovitch — I actually met them! I was proud to show them my country. Peaceful or not, Jerusalem is ravishing at night. It will yet appear in dreams had far, far away.

The following day I again took the sherut to Jerusalem, again for drinks in international company. This time: Germans and Russians. The first get-together was a farewell to a friend, the departing director of Jerusalem’s Willy Brandt Center. It featured live music from “Heartbeat,” a musical group made up of Israeli and Palestinian youths, brought together by a peacenik NGO of the same name.

“You see,” I told the guy standing next to me in line at the refreshments table, “It’s so easy getting the kids together, but try and get grownups to do something as simple as record a Lorde cover.”

He suggested that I recruit Heartbeat for the project, but I wasn’t keen. Heartbeat was meaningful, all right. Their songs brought up real issues in a confidant way. One kid even gave a pretty good rap bit about being from a refugee camp, but I was put off by the NGO dimension, by the foreign intervention. My project was grassroots!  The little anti-Normalization activist hiding inside me joined hands with a tiny post-colonialist scholar and both yelled: “enough with bleeding heart Americans and Germans who try to turn the conflict into a Broadway musical!”

“No duets,” I committed to the munching stranger. “There’s a wall between us, and my album must reflect it.”

Proud though I was, during intermission I couldn’t help myself. I stepped over to Ami Yares, an old friend and fine musician who coaches the Heartbeat kids, and asked for his support. “Dude,” I said, “You’re working with a lot of talent, and I am looking for talent.”

“Rasha,” Ami called out, stopping a girl as she made her way down the hall, “I’d like for you to meet my friend Yuval.”

Rasha was young, but evidently not too young to be walking about with a glass of wine. I estimated her age at 18. She had a waterfall of dark hair tied up in several pins over piercing dark eyes. She looked a lot like a Middle Eastern variation of my project’s subject matter.

“Do you know the singer Lorde?” I asked in English.

Still, I had little to lose, so went ahead and asked: “Would you like to participate in an Israeli -Palestinian tribute to her?”

“Even though she sucks?”

“Can you translate? We need translations of her lyrics into Arabic.”

“You mean, to translate them in sync, so they can be sung?”

We got talking. I learned that Rasha sings, plays the guitar and composes all her own material. “I’ve been writing up a storm lately,” she told, “10 songs in two months. They’re not all ready yet, but the lyrics are all there. First I come up with lyrics and then I toy with music.”

This was nearly a direct quote of Lorde. “Alright,” I said, “let’s talk after you play. I’ll leave you my information.” If Rasha turned out to be a disaster, I could sneak out and make it on time to the next social function: a house party of Russian Israelis, in celebration of New Year according to the Julian calender.

Rasha strummed a chord, and I knew I was going to be late for that party. Vocally, she was more of a female Tom Waits than an Arab Lorde, and that was just fine by me. She rasped small eulogies of our torn land. I loved them. There was no need to stalk Mira Awad in the wasteland. I went into the Center’s kitchen, where I previously plugged my phone to charge, and texted Yaron: “There is a partner.”

Ami gave a set after Rasha and then called on me to play a tune or two on Rasha’s guitar. I played one of my own, then spoke a bit about the project and ventured into “Buzzcut Season,” but something went wrong. Rasha’s guitar went out of tune, and my voice died. I couldn’t hit the high notes. I stopped after one verse, said something about Lorde being more equipped to sing at this scale, and walked offstage. 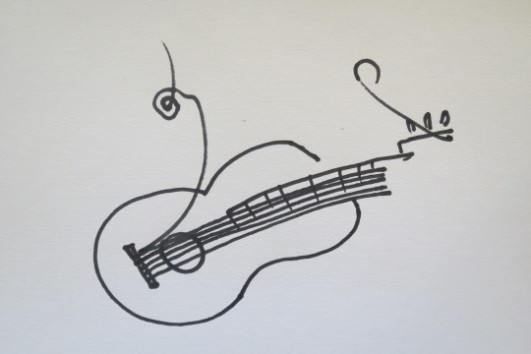 And so the fleeting chance was lost. What aspiring young musician would want to cooperate with someone this amateur? We overcame all the political issues, the sensitivities and possible misunderstanding, the language barriers and sick power structures, the hurt and the guilt. Naturally, it was now up to a simple false note to ruin it all. I stopped over to hand Rasha a note with my name, so she could find me on Facebook. She accepted it without breaking another conversation. I waved goodbye cheerfully, but reached the Russian party gravely in need of horseradish vodka. I blew another chance. This was going nowhere, absolutely nowhere.