Putting together an homage to your favorite singer is a trivial thing — if you live in a normal country. 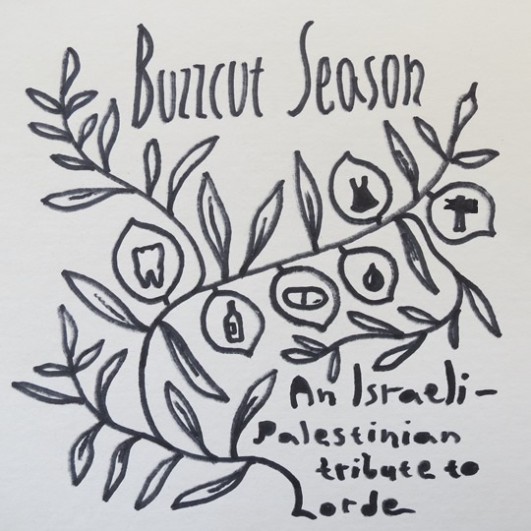 It started off as a simple enough idea: let’s make a musical tribute to Lorde, New Zealand’s young and upbeat singer-songwriter. I’m crazy about Lorde’s music, despite being nearly 40 years old and usually more of a Schubert enthusiast. I even found myself translating her songs into my native language, Hebrew.

My easygoing friend, Yaron Fishman, was game, and he’s a musical producer. Everything fit, and then I messed it up. I put politics into it, or rather, extracted the politics of simplicity.

I am an Israeli who works with Palestinians as equals, which is rare. (Typically we are the ones bossing them around.) This experience has taught me to see my country as home to at least two equally legitimate societies. If this is to be a local tribute, I told Yaron, we should find a translator into Arabic and a Palestinian singer. It shouldn’t be too difficult.

But it was. In the year 2015, society in the Holy Land is exceedingly polarized and the air is dense. Every word, spoken or sung, can be taken as a political statement. Our potential partners were scared off at first: either by the fear of being misunderstood or because they misunderstood us.

As the journey evolved, I felt it was fascinating and decided to document. The result is “The Israel Palestine Lorde Diaries,” a 15-part online novella. It tells of how I desperately chased a Eurovision star to a dark desert clifftop, how I performed “Royals” to a Jerusalem hassid, and jammed on a bus with a pre-teen from Bethlehem. Lorde remaps the country from chapter to chapter, and countless issues arise: anti-Normalization, government-sanctioned racism, identity politics, what we hear when we hear each other’s languages and music and even how we look at a land like New Zealand.

The diaries take about an hour to read, and are probably the best thing I’ve written in English (I’m a Hebrew author by day). It is certainly the first thing I have ever illustrated (apologies). Thing is: at times I came close to accepting that the Diaries themselves would be the only final product, the only outcome of the project. I allowed myself to believe that the musical project had failed and had given way to a storytelling project. Then, just as I fully despaired, the concept changed.

Since Palestinian partners were so hard to find, I decided to turn the microphone on Israeli society: to lift the blanket of pretend homogeny and explore the identities and languages lying beneath the surface. If we treat ourselves honestly, would our neighbors not be more trusting? If we break up the strict binary, would joining the pieces not prove easier?

This proved to be a good move.

Here, then, is the dream fulfilled. It is “Buzzcut Season,” a five-song, Israeli-Palestinian tribute to the songs of Ella Yelich-O’Connor, six months in the making. Four of the covers are sung in languages common in Jewish-Israeli society. The fifth is in Arabic. Singing it is Palestinian Rasha Nahas, who is Lorde’s age, 18, and whose talent is luminous.

‘Royals’ in French. Cover by the Djamchid Sisters

First, Here are Shai-li and Eden Djamchid of Jerusalem, performing a dashing version of Lorde’s greatest hit to date.

Djamchid is a Persian name. I half expected the sisters to sing in their paternal ancestors’ Farsi, but they preferred their mother’s native French: the tongue of many a royal, many a pauper, and quite a few Israelis, whether of French or North African background. It was the official language around these parts during the times of the Crusades.

Lorde composed this one for the soundtrack of the third “Hunger Games” movie. It is a monologue of latter day Artemis Katniss Everdeen, a rebellious tune.

Naturally, I expected the Palestinians to pick it up, but life is full of surprises. Translator Vlady Dvoyris snatched it and Pushkinized it magnificently. Russian is the native tongue of over 1 million Israelis, many of whom arrived here following the fall of the USSR.

Here is my own Hebrew version of my favorite Lorde song. The lyrics deal with escapism in a violent world and ring especially powerful in this country and in this language.

The style we picked is that of Israeli rock of the 90s: decisively European, yet with a Mideast-influenced guitar solo. I’m amazed at Yaron’s technical abilities. His studio is simply a living room filled with mics. We had to sample the drums from YouTube.

‘Team’ in Yiddish. Cover by The Technicalities

“Living in ruins of a palace within my dreams,” sings Lorde, and this would be a perfect description of the existential state of Yiddish enthusiasts: lovers of a dying language.

Shira Z. Carmel and Alon Diament make up Yiddish combo The Technicalities. They bring the brilliant “Team” to life in the tongue of European Jewry, a language we associate strongly with the elderly and the ultra-Orthodox.

‘Biting Down’ in Arabic. Cover by Rasha Nahas

Biting Down is pretty much a Lorde B-side. It isn’t featured on her album “Pure Heroine,” but on the freebie EP, “The Love Club,” that preceded it. It’s strikingly rootsy and a bit darker than her other offerings.

Rasha Nahas of Haifa pulled this one apart and put it together according to her own vision, which is what I feel we should do with the entire system here and all our dysfunctions. Jamming together despite the barriers is a nice first step.

Thank you all for reading and listening. Here is a playlist for those wishing to enjoy the songs uninterrupted.

Many creative spirits have helped this be. Each Youtube video features musician credits, and other thanks (including a letter to Lorde) appear in chapter 15 of the Diaries.