Let’s focus on the fact that many prefer to avoid: Jewish terrorism in the territories is directly supported by the Israeli government, and to a large extent also funded by it

Brigadier General Nitzan Alon, who left the command of the AYOSH (West Bank) Division yesterday, spoke candidly during his replacement ceremony, and called the “price tag” actions by their true name: Jewish terrorism. Alon, who was repeatedly harassed by the settlers, demanded that more be done in the battle against it (Hebrew). One could, of course, ask why Alon himself (who as the “military commander” in the West Bank wields the combined powers of a British occupying general and a Turkish pasha) didn’t commence this battle; why didn’t he order the destruction of the houses of suspected Jewish terrorists as the IDF destroys the houses of the families of Palestinian suspects; why didn’t he put rebellious settlements under curfew, as many Palestinians towns and villages have been so often?

But this is just me being ornery. The questions answer themselves. The apartheid regime Israel created in the West Bank over decades, and the political power of the terrorists and their supporters, prohibits an effective fight against them. The apartheid system, the double legal system – military for the natives, Israeli for the invaders – has been described often enough. Let’s focus on the fact that many prefer to avoid: Jewish terrorism in the territories is directly supported by the Israeli government, and to a large extent is also funded by it.

Case in point. Ha’Kol Ha’Yehudi, the site which promotes the “price tag” pogroms, published on Monday an article by Yossi Elitzur, in which Elitzur called for the murder of terror suspects instead of their arrest (Hebrew). Elitzur further said that even if a suspect is already bound, and is no longer a threat, he is still affected by Din Rodef since “he may try [carrying out a terrorist attack] again tomorrow.”

This is a thorny issue, which needs examining. Din Rodef is the Jewish law mandate on how to deal with a person presenting a danger to human (i.e., Jewish) life. It is refined: It says that every man has a duty to a harm a “rodef” (literally, “pursuer”, someone who is actively out to harm someone else), but first, he should try to subdue him without killing him. If this is impractical, however, then “you save the life of the pursued by the life of the pursuer.” However, once a person stops being a pursuer, i.e. stops actively risking life, he is no longer considered a pursuer. What Elitzur does here is twisting classical Jewish law.

This particular twist isn’t new. I heard it first some 26 years ago, as a yeshiva student in Nehalim. Some preacher was brought over for Shabbat from Kiryat Arba and he chose this particular theme as for his sermon; he said you should open fire at pursuers even as they flee. My class’s rabbi, Menashe Rashovski, was an old-school ultra-Orthodox rabbi, and he was scandalized. He summoned the class afterwards, which was highly irregular on a Friday night, and then he explained to us at length – he was, in fact, screaming, shouting at us – that what we just heard was a corruption of the truth; that “pursuer” is a temporary title, which is derived from the clear and present danger; that once a pursuer puts down his weapon, he reverts back into a human being, with all that entails. Most of us stared at him, not understanding what he was so agitated about. But he knew, even then – those were the days of the first Jewish underground, when the leaders of the national-religious pretended to be shocked and to conduct agonizing soul-searching – where we are headed. He knew Halachaic dynamite when he saw it primed.

Zoom out. Elitzur is a rabbi in the Yitzhar yeshiva. He is one of the two writers of the notorious “Torat Ha’Melekh”, which permits the deliberate killing of gentile children “if there is reason to believe they may some day harm us.” Ha’Kol Ha’Yehudi is a legal association of Yitzhar yeshiva students. The Yitzhar yeshiva is an ideological hothouse of Jewish terrorism – certainly not the only one, but one of the most prominent. Ha’Kol Ha’Yehudi functions as the equivalent of Rwanda Radio, passing out the message in easily-digestible bits to the masses.

There is, in fact, a third arm in this triangle: The Honenu Association. Its mission is to represent Jews suspect of terrorism – against Palestinians or Jews. They represent Hagai Amir, one of the conspirators in the Rabin assassination plot, and they represented Jack Teitel, who carried out several attacks against liberal Jews (and a bombing attack against a Jewish family which converted to a form of Christianity). 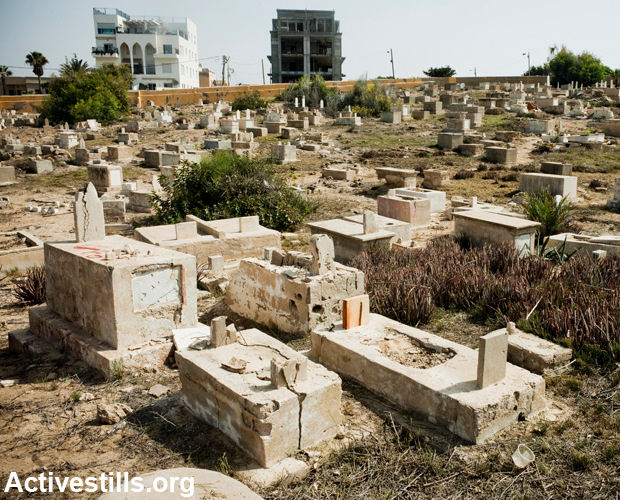 A graveyard in Jaffa, desecrated by Jewish terrorists. (Photo: Activestills)

Honenu is linked to Yitzhar and Ha’Kol Ha’Yehudi. Its spokesman is Elhanan Gruner (Hebrew), who is also a Yitzhar Yeshiva student and a very active writer (Hebrew) in Ha’Kol Ha’Yehudi. He was shortly detained by the Jewish Division of the ISA, but – as usual for this division – was freed soon afterwards, and was not indicted.

Despite pleas from the ISA, the Yitzhar yeshiva is funded by the Ministry of Education. Yossi Elitzur is for all practical reasons a government employee, kept on the payroll so he can spread his poisonous creed. Honenu is tax-exempt, i.e. is subsidized by the government. It should be noted that of some 15,000 non-profits in Israel, only 3,800 are exempt from tax. Such exemption requires the approval of the Ministry of the Treasury as well as the Knesset’s Budget Committee. Honenu, doing such stellar work, received it.

So, on one hand, the government funds Yossi Elitzur’s hate speech, and with the other it funds the legal defense of his pogromchiks. Its army and security service find themselves ground between them. Assuming the very active Gruner is paid by Honenu, to a certain extent Israel also funds the activity of Ha’Kol Ha’Yehudi.

Here is the infrastructure of Jewish terrorism. It is funded by Israel. Keep that in mind, next time the government demands the Palestinians do something about their own terrorism infrastructure. Do as they say, not as they do.