Netanyahu tells supporters at a settlement campaign event that Israel will continue to build in the West Bank, as his Likud party competes with more hawkish parties for settler votes. Erekat calls for boycott, divestment in response. 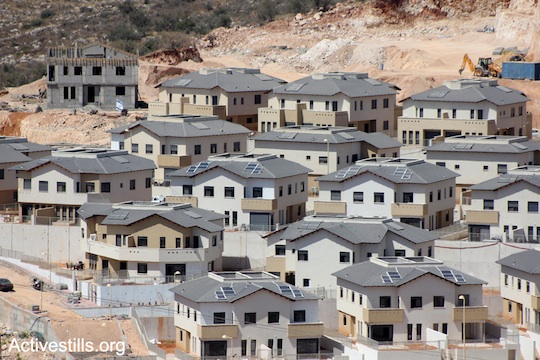 Construction of illegal settlement units at ‘Elkana,’ on the lands of the West Bank village of Masha, near Salfit, July 06, 2013. The latest construction tender calls for 156 new housing units in the settlement. (Photo: Ahmad Al-Bazz/Activestills.org)

Less than a month and a half before general elections, the Israeli government published tenders for 430 new settlement homes in the occupied West Bank on Friday.

The move could be interpreted as a gift of sorts to the right-wing electorate as the ruling Likud party fights for votes with the further-right Jewish Home party headed by Naftali Bennett. While Netanyahu has ruled out a withdrawal from the West Bank, which would necessarily preclude Palestinian statehood. Other prominent members of the Likud and the entire Jewish Home party outright oppose a two-state solution.

The settlement construction tenders are issued via the Housing and Construction Ministry, headed by Minister Uri Ariel of Jewish Home.

“We will not hesitate to stand up and say: we are here, we are staying here, we will build here and cultivate here,” Netanyahu said. “Ariel is a part of the State of Israel, that’s the way it was and that’s how it will be.”

The prime minister also ruled out handing over the central West Bank hill country to the Palestinians, warning of a “second Hamasastan.” Netanyahu put his refusal to withdraw from the West Bank in even clearer terms in July. “There cannot be a situation, under any agreement, in which we relinquish security control of the territory west of the River Jordan,” he said.

The plans include new construction in the settlements of Adam, Elkana, Alfei Menace and Kiryat Arba, according to AFP.

Israeli President Reuven Rivlin is scheduled to attend a dedication ceremony Monday for a new community center in the settlement of Kiryat Arba, which abuts the Palestinian city of Hebron and the Jewish settlement inside the city. Rivlin is a Likud veteran but has put great effort to stay above party politics since assuming the presidency.

Chief Palestinian negotiator Saeb Erekat called the latest settlement announcement “unsurprising when viewed in the context of the culture of impunity granted to Israel by the international community.”

Erekat called on the international community to hold Israel accountable, saying the world should “ban all settlement products and divest from companies and institutions linked directly or indirectly with the Israeli occupation and apartheid policies.”