In a High Court case over a law to legalize Israeli settlements built on stolen, privately owned Palestinian land, the attorney hired to represent the government (because the attorney general refused to do so) argues that Palestinians, and not just settlers, would actually benefit. 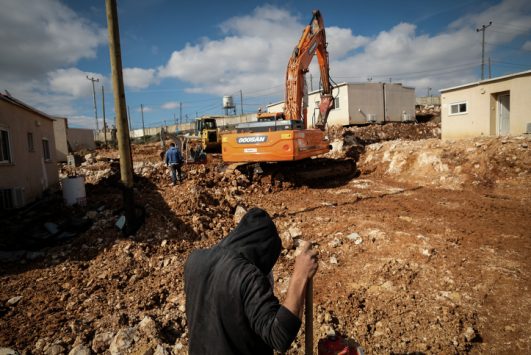 Sunday’s hearing was remarkable, and not only because of the law’s potential consequences. After all, it’s not every day that attorneys Michael Sfard and Hassan Jabareen, two of the country’s most prominent human rights lawyers, find themselves on the same side as the Attorney General — and in opposition to the government and the Knesset.

For much of the hearing, Attorney Aner Helman, who represented the Attorney General’s office, gave such a stirring denunciation of the law’s human rights violations that one might have thought he was one of the petitioners in the case.

Attorney General Avichai Mandelblit has refused to defend the law, calling it unconstitutional. Due to his refusal, the government was forced to hire a private lawyer, Attorney Harel Arnon, to defend the law in court.

Most of the hearing focused on two main questions. First, is international law the relevant in the case or should the law be judged according to Israeli law? If it’s the latter, should international law be ignored entirely?

Arnon quickly answered the first question: the lawsuit is a matter of striking down Knesset legislation, rather than an administrative order. “The petitioners, in practice, are asking the court to carry out a judicial coup,” he claimed. “They are demanding, in the name of foreign norms, to flip the scales that Israeli society designed for itself.” The suit, Arnon continued, constitutes an attempt to erode the authority of the Knesset.

After grounding his claim that the expropriation law should be judged solely according to the Israeli legal framework, Arnon took more than an hour to detail the central aims of the legislation. The immediate goal, he said, is for the government to take responsibility for a situation in which, due to a complex political reality, it’s own policy has been contradictory. On the one hand, the government has funded and supported the West Bank settlement enterprise, even when these activities were illegal in one way or another. On the other hand, the government didn’t formalize the situation — in other words, it did not legalize its own illegal policies.

Now, Arnon said, it was the government’s obligation to take responsibility for the situation, stressing that the law is not intended to expropriate land for new settlements, but rather to provide a solution to an existing problem. 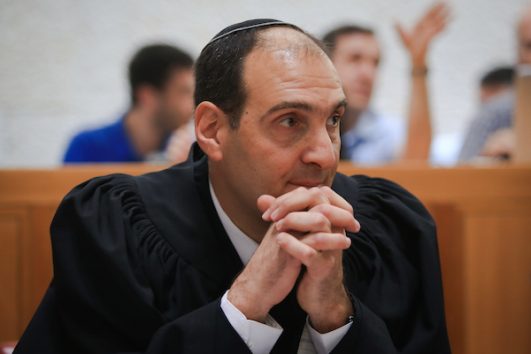 Harel Arnon, the private attorney hired by the Israeli government to defend the ‘Formalization Law’ before the High Court on Sunday, June 3, 2018. (Yonatan Sindel/Flash90)

Arnon also discussed the law’s “economic aims.” While in his previous points Palestinians were not a factor and the law was simply a matter between the government and the settlements, now, Arnon claimed, the law would also benefit the Palestinian landowners, whose representatives were present in the courtroom as co-petitioners. “Settlement land that has so far been evacuated remains vacant,” Arnon said. “There’s no economic logic here.” As Arnon uttered these words, I watched Sfard shift uneasily in his seat and mouth the words, “chutzpah.”

Arnon was not interested in the question of why Palestinian landowners were unable to return to their land in many of the places where settlement outposts have been evacuated. “This law has a compensation plan uncommon in its generosity,” Arnon continued. “Under the current situation, those who control the land cannot actualize their rights to it, and neither can the owners. The law is in accordance with the notion of distributive justice.”

I listened in shock as he marshaled these terms — governmental responsibility, distributive justice — to defend a law that would legalize theft.

Like a private attorney representing a client — in this case, the Israeli government — Arnon spoke in terms of efficiency. “Simple, effective, and easy to use,” is how he described the law. Instead of legal proceedings for each individual house in an illegal settlement, the law would allow for the legalization of all of them in one go. And this, he stressed again, did not constitute approval for new settlement building, but rather the formal legalization of buildings at the core of the settlement project.

In any event, Arnon said, the law did not actually constitute land expropriation, but rather expropriation of the right to use the land. Ownership of the land would not be transferred — in other words, nothing more than a lease on terms very favorable to the lessee. Arnon sounded so sure of his own claims that he seemed to expect the Palestinian landowners, petitioning against the law he was defending, to thank him.

But the representative of the Binyamin Regional Council, a Jewish municipality in the occupied West Bank, managed to out-do even Arnon. She claimed to give voice to the anguish of the “women in the settlements who cannot get divorced because their land’s unclear legal status prevents it from being divided,” thus leaving couples seeking divorce in legal limbo.

The first to challenge the government’s claims was Attorney General representative Aner Helman. Helman agreed that the Formalization Law should be judged according to Israeli standards, but pointed out that when Israeli law violates the rights of Palestinians in the occupied territory, they have legal recourse through Israel’s Basic Law on Human Dignity and Liberty.

He rebutted Arnon’s claims one by one. For example — the claim that the law will apply only in instances where Israeli building is worth more than the value of the land. “Even two caravans on a far-out hill, the moment they’re connected to utilities like electricity and water, are worth more than the land,” Helman said. And no, the law was not intended to preempt the mass eviction of entire settlements, as Arnon had claimed. Nearly all of the suits filed against settlements, many of them filed by Michael Sfard himself, were filed against new settlement construction and not old, established settlements like Ofra — despite the fact that a quarter of Ofra is built on private Palestinian land.

Helman repeatedly stressed that the law constituted a sweeping and disproportionate arrangement that would almost exclusively harm the Palestinian residents. This, Helman said, made the law discriminatory, violating their rights to property and dignity. 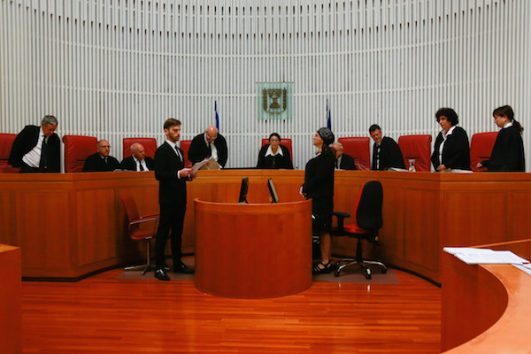 Supreme Court President Esther Hayut (C) and Supreme Court justices arrive for a court hearing regarding the Regulation Law at the Supreme Court in Jerusalem on June 3, 2018. (Yonatan Sindel/Flash90)

Jabareen then spoke about the problem of applying Israeli law to Palestinians living in occupied territory. “Do the residents of Jenin now need to worry day and night about what the Knesset legislates because it is the governing power, according to Mr. Arnon, and not the military commander?” asked Jabareen. He reminded the judges that, according to Israeli law, changes to the legal regime in the occupied territories can be carried out solely in accordance with international law. Ignoring international law and relying only on Israeli law, Jabareen claimed, had no legal standing even in Israel courts. “Eichmann’s defense, too, was ‘I acted in accordance with German law,'” Jabareen observed.

“There are two legal systems recognized as legitimate, there is no third: national law, which every country has, and the laws of occupation according to international law,” Jabareen explained. “A system in which one nation determines [the law] for another without limit is clearly colonialism.” What Mr. Arnon is saying is that until now we’ve been acting wrongly, so now we’re going to correct the wrongs legally,” Jabareen added. “That is precisely the definition of apartheid — the codification of discrimination in law.”

While a significant portion of the hearing dealt with the question of Palestinian property rights, Adalah attorney Suhad Bishara emphasized the violations of human dignity. “There is a connection between property and dignity,” she told the court. “Dignity cannot be compensated for.”

To close, Michael Sfard returned the hearing to the question of the applicability of international law that Arnon so badly wanted to avoid. The separation of two distinct legal systems — the Israel legal system within Israel, the military system under international law in the occupied territories —is what regulates the situation legally. If Israel stops operating in the settlements within the limits set by the international and begins to implement its own laws, it is effectively annexing the territories. “It is impossible to say, ‘we didn’t annex, we didn’t change the fundamental norms,’ and also say, ‘we are not limited by international law.’ Otherwise, what is the basis of authority?”

In a sense, Sfard’s comment summarized the core of the hearing about the law: whetherr the High Court allow the government to de facto annex the occupied territories without having to annex them de jure and deal with the consequences under international law. Israel, in practice, has regularly committed severe violations of international law for over 50 years, including clear war crimes such as the expulsion of indigenous communities, the building and expansion of the settlements, and more. But now it seems Israel is not satisfied with changing the reality by putting facts on the ground. Israel wants to change the rules to allow for these crimes, to no longer have to defend each instance of land-theft individually before the court.