When will the Jewish Left wake up and come to terms with the fact that the rules of the game have changed?

It seems that even the most skeptical of radical left-wing activists in Israel were taken by surprise by the aggressive, relentless, and mounting attacks that we have witnessed over these past few days against left-wing activists.

This madness refuses to die down. Day after day we hear about arrests of left-wing activists, who disappear into their cells without ever being informed of what they are being accused. The police slap a gag order on the entire story, preventing us from even publishing their names.

We know these people from years of working together. We go, time after time, to stand outside the courthouse in order to make sure they hear our cries of support and solidarity. We see them being led in handcuffs, disappear into closed-door court hearings, wait for the results — which are generally known from the get-go — and return to the silence that surrounds these organized kidnappings. Because the gag orders are so sweeping, we cannot speak of the political context of these arrests, about the connection between one arrest and the other, about what is happening before our eyes — we are prevented from speaking about openly.

The public has almost completely consented to the gag orders, leaving the police room to frame the discussion. Thus, while not a single person can actually publish the name of the first activist who was arrested last Sunday, and despite the fact that nearly everyone knows his identity, the police have managed to convince the public that they captured him as he tried to flee the country. Were we able to talk about the man and the reason for his arrest, we could debunk this absurd claim. But we cannot, so we remain silent.

We remain silent when another Israeli activist, a dear friend to many of us, is arrested — even when many of us suspected that this would be the next step. Anyone who was aware of the circumstances surrounding the first arrest won’t be surprised. So we know, and we remain silent. We return to the courthouse and wait outside during the hearing, return home and continue to remain silent. Then we guess who will be next in line.

We are silent even when the police continue trying to keep the activists in jail, without ever presenting even a shred of evidence to the public to back up the allegations against them. The only thing the public needs to know is that three very dangerous people were arrested — so dangerous, in fact, that they cannot even meet with their lawyers. Why? Because. They are leftists. In such a poisoned public atmosphere, nourished by the Prime Minister’s Office and the country’s highest-ranking officials, not much more is needed. The public has already bought in to the story.

Time to break the silence

Some of us believed, and perhaps still believe, that there is something positive in seeing the masks come off, forcing the public to decide whether Israel is “Jewish” or “democratic” — a decision it has avoided for years. There is something to this argument. Perhaps the world will also wake up and understand. But it seems that so few of us foresaw how quickly things would deteriorate. 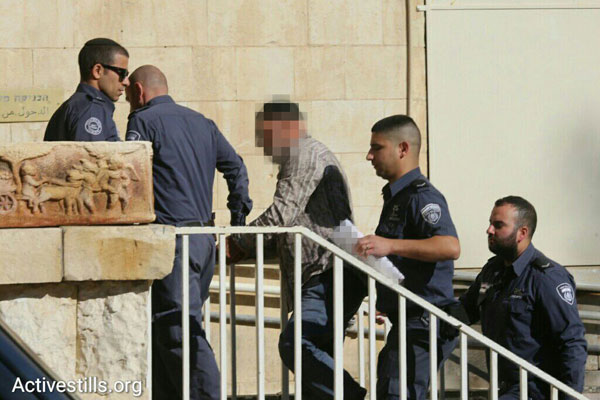 Palestinian friends remind me over and over that the reality with which the Jewish Left must deal with today has been the reality for Palestinian activist for decades. They are right, of course; Palestinians are still far more vulnerable than Israeli activists. But we must not ignore the fact that the unprecedented persecution of the Israeli Left, its constant delegitimization, its orchestrated criminalization, is a new stage that will have far-reaching consequences on Palestinian citizens of Israel themselves. The fact is that we are facing political persecution from the political establishment, but also from private organizations that are joining the fray.

The time has come to say it openly: we are at war, and we must think long and hard about how to prepare ourselves. It is unthinkable that we will play by the rules of the game while our friends are being hunted. It is unthinkable that we will play according to the “rules of democracy” as fascism becomes the new state religion. Our silence today will only serve as the basis upon which our friends will be arrested tomorrow. Now is the time to break that silence.