Though every fifth Israeli citizen is Arab, most Jewish Israelis only know of them and their political thoughts and identity through the Israeli media, and only two polar opposite stereotypes are portrayed in the Hebrew media: the apolitical ‘good Arab’ and the terrorism-supporting ‘bad Arab.’ 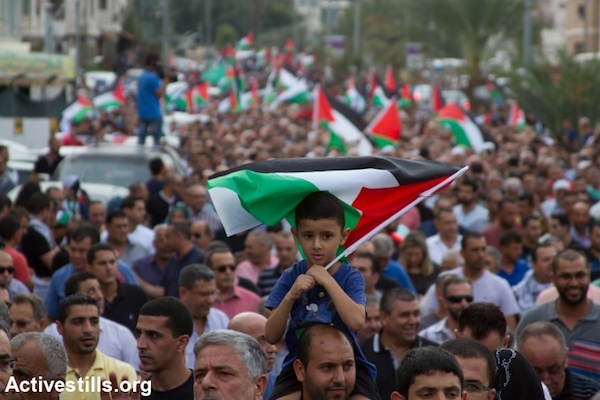 Despite the fact that every fifth Israeli citizen is an Arab, media coverage of the most significant minority in the State of Israel is for the most part sparse and one dimensional. Only a small percentage of the interviews and reports in the various media outlets deal with the Arab population, and even those only usually discuss security, political or criminal issues — with a negative slant. In the Hebrew-language media you will rarely find Arab experts discussing science, medicine, arts or entertainment.

Despite far-reaching changes in the integration of Arab citizens into the labor market and the public space in Israel in recent years, most of the Jewish public still has little daily contact with Arab citizens. Jews and Arabs usually live in separate communities and work separately. In the formative stages of life in Israel, such as military service and studies, there is almost total separation. Most of the Jewish public’s knowledge of Israel’s Arab citizens comes via the media.

The obvious conclusion is that the Israeli media has great responsibility and influence when it comes to Jewish attitudes toward Arabs and the future of Jewish-Arab relations in general — and the media is not always aware of that. The escalation this October clearly illustrated the extent to which media coverage of Arab citizens can be biased, and the great influence that bias has on citizens in the streets and on the social networks, and on the level of tension between the two most important population groups in Israel.

Because of the political tension, Arab citizens’ presence in the Israeli media was far greater in October, but it also became more polarized and extreme, as many media outlets mobilized to contribute to the national morale and resilience, in a quasi-warlike atmosphere.

Although the general Arab public included a wide variety of views and opinions regarding the conflict and the use of violence, the media for the most part presented two diametric stereotypes. On the one hand we were presented with the “good brother” who is uninterested in politics, wants to continue working unobtrusively in the hospital or the local restaurant, and aspires to coexistence and a quiet life alongside the Jews. And if he also expresses opposition to the Arab leadership and the preoccupation with politics, all the better.

And then there is the “terror-supporting” Arab — Arab citizens who ostensibly turn every demonstration into a violent outburst, identify with and encourage the wave of terror attacks and in want to subvert and destroy the country. This coverage was in step with the line vigorously promoted by the right-wing parties and government representatives, who portrayed the Arab public, and especially its leaders, as enemies of the state and supporters of terror.

In the huge gulf separating these two types, where the vast majority of Arab citizens can be found, there was a total media vacuum. A stranger landing in Israel wanting to learn about Arab citizens of Israel from the media would think that only those two types of people exist. But in fact this total dichotomy created a superficial and one-dimensional picture of the Arab public in Israel. Also contributing to that was the blatant absence of Arabs from the television studios and radio programs, a problem that has existed in the Israeli media for years.

Most important, the media missed out on presenting a more complex picture of many Israeli citizens who are interested in being part of Israeli society and the Israeli economy, who demand their legal and material rights and are interested in living in equality and economic prosperity, but are also unwilling to give up their Palestinian identity and their national and political connection to the Palestinians on the West Bank and in Gaza — members of their nation and often family members and relatives as well. 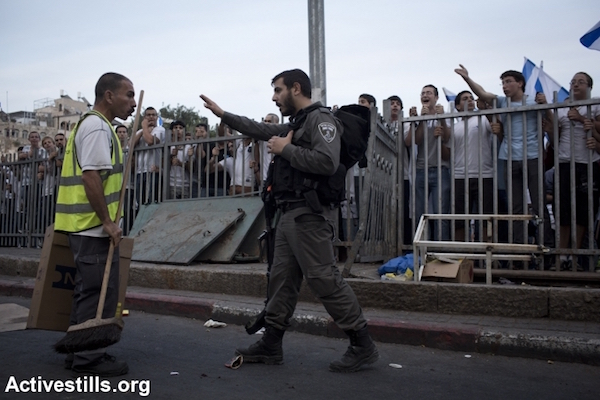 An Israeli police officer argues with an Arab sanitation worker in Jerusalem as right-wing Jewish Israelis stand behind a barricade during the nationalist and often violently racist “March of the Flags” parade, Jerusalem, May 28, 2014. (Oren Ziv/Activestills.org)

The clearest example of this was the coverage of a general strike and mass demonstration in Sakhnin, called for by the Arab leadership in the midst of last month’s escalation. Although this is the most basic and legitimate act of protest in a democratic society and although it ended without any violent incidents, the strike was presented in many media outlets as an act of solidarity and support for violence.

There was no room for the complex political world view of the Arab majority in the media that day. These are Israeli citizens, most of them Muslim, who are concerned about the status quo on the Temple Mount and the affront to the feelings of the worshipers. They are opposed to the continued occupation of their people in the territories and the victims it claims. They suffer severe discrimination and inequality compared to the Jewish majority in almost every social and economic measure. They also by no means support violence or terror, and for the most part are law-abiding.

This is not a theoretical assumption. An examination of the facts reveals that the number of violent incidents in which Arab Israelis participated in recent weeks was miniscule. But despite the facts, most of the media automatically portrays anyone who went on strike or demonstrated that day as a supporter of terror.

The influence of the media on the public discourse and the Jewish public agenda was clear in this case. Because most Israelis learn about Arab citizens and form opinions about them primarily via the media and its daily coverage, the feeling was that the general strike was essentially an expression of support for terror — and the reactions were not long in coming.

On the day following the strike there was a wave of demands on social media to boycott Arab-owned businesses in Jewish cities that had been on strike the day before, because they supposedly expressed solidarity with the stabbing attacks. In addition, the media played a considerable role in the tremendous pressure concerned parents to schools throughout the country that led to the removal of Arab janitorial staff from schools — an infringement on their rights. The connection between the tendentious coverage and public reactions on social media and real life is unequivocal. Law abiding citizens who chose to engage in legitimate and nonviolent acts of protest lost their wages and their rights were infringed upon — mainly due to the manner in which they were portrayed by the media.

The Israeli media has tremendous influence on relations and tensions between Jews and Arabs, all the more so in periods of escalation and serious political conflict. While the politicians are busy marking targets and the threshold of belligerence is only increasing, the media has a decisive role as mediators, presenting the lives and the views of Arab society to the Jewish majority in Israel.

Just at a time when Israeli society threatens to split into two and the few places where Jewish-Arab partnership still exists are beginning to disappear, the role of the media as the guardian of the threshold of democracy becomes far more important. In response to voices of delegitimization and incitement that aim at divisiveness and at singling out internal enemies, there were not enough outlets in the mainstream media that were able to exhibit responsibility and to try to achieve a fair and accurate representation of the various groups that comprise Israeli society — although it was not a popular viewpoint during this period.

Even the attempt to present the “good Arab” who doesn’t want to hear about politics or the Palestinians and aspires only to a quiet life and a livelihood, was effectively damaging. Most Arab citizens do in fact aspire to peace and coexistence with Israel’s Jewish citizens. But they are also unwilling to accept the discrimination, and the occupation of their Palestinian brothers in the territories. The same is true of the leadership they have chosen, which was also presented in the media as monolithic, negative and inciting, although it includes a very wide range of viewpoints and types of activity.

The sooner the Jewish public is aware of and accepts the complexity of Israel’s Arab citizens, the sooner the day when Jewish-Arab partnership within Israel will become a real and feasible option. In a sense, the stereotype of the apolitical Arab is almost as bad as portraying all Arabs as Jew haters. The truth does not lie in either of the extremes, although it may be easier to present it that way. Instead, it would be preferable for the media to try to present the complex midpoint to which most Arab citizens are closer.

Edan Ring is the Director of Public Affairs and the Arab Media Representation Project at Sikkuy—The Association for the Advancement of Civic Equality in Israel.