In a now-infamous radio interview, the nation’s Public Enemy No. 1 made it clear she disagreed with the kidnapping of the three Israeli boys. But that part has been edited out of the story by every major news medium except ‘Haaretz.’ 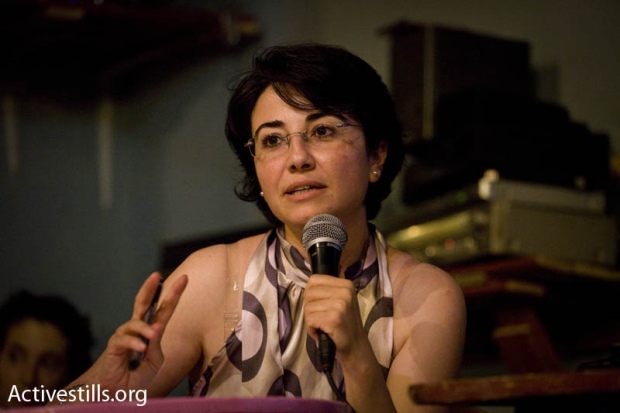 Once again, Knesset member Haneen Zoabi, a Palestinian from Nazareth, is Public Enemy No. 1 in Israel. The Knesset just gave her a bodyguard because of all the death threats she’s been getting, and she’s being investigated for incitement. Everyone is convinced she endorsed the kidnappings of the three Israeli teenagers.

I was convinced, too, after I heard the news reports on Tuesday about her radio interview. It was only this morning, Wednesday, when I saw a translation of the interview and read the story in Haaretz about the whole uproar that I saw Zoabi had made it clear she disagreed with the kidnappings.

“Even if I do not agree with them …” is the phrase she used – and that phrase has been edited out of the reporting of this latest “Zoabi affair” by Israel’s most popular TV news show, Channel 2; its second-most popular one, Channel 10; its most popular newspaper, Yedioth Ahronoth; its most widely-distributed newspaper, the freebie Israel Hayom; by the once-influential Ma’ariv newspaper; and by two of the three leading English-language news sites, the Jerusalem Post and Times of Israel (the latter did, however, report that “Zoabi later clarified in an interview on Israel Radio that she does ‘not support the kidnappers, but [kidnapping] is the result of frustration.’”)

Only in Haaretz did anyone read that Zoabi said from the beginning that she disagreed with the kidnappers and their deed. (Full disclosure: I work on the desk at Haaretz in English, but I was off Tuesday.)

Is it strange that people living under occupation and living impossible lives, in a situation where Israel kidnaps new prisoners every day, is it strange that they act this way? They are not terrorists. Even if I do not agree with them, they are people who do not see any way open to change their reality, and they are compelled to use means like these until Israel wakes up and sees the suffering, feels the suffering of the other.”

Myself, I don’t think the occupation or anything else compels people to kidnap 16-year-old boys – though it clearly provokes them to. And the kidnappers do fit the common definition of “terrorists” – militants who target civilians – but the term “terrorists” also implies that they act purely out of evil intent, without any legitimate political cause, and in that sense the term does not fit the kidnappers.

But if you take Zoabi’s statement – and leave in her words “even if I do not agree with them” – you get a wholly different picture of what she said than what is being reported by the Israeli media, let alone what is being said by the crazy politicians. (The most deranged of all is Foreign Minister Avigdor Liberman, who effectively called for Zoabi’s execution, saying, “The fate of the kidnappers and the fate of Zoabi, who incites and encourages the terrorists, ought to be the same.”) But everyone except Haaretz left out her all-important caveat and focused on her words “they are not terrorists” to brand Zoabi as a champion of the kidnapping, which is a lie.

Some of these media hit jobs are really crude. The introduction to the Channel 2 story on Tuesday night went, “Knesset member Haneen Zoabi keeps attacking Israel – first by sea, now by land.” The so-called sea attack was a reference to Zoabi’s presence on the Mavi Marmara aid flotilla to Gaza in 2010, when Israeli commandos killed 10 activists aboard after being beaten with clubs. Yet Zoabi, who stayed below during the clash, was part of the “attack,” according to Channel 2.

Ynetnews, the English-language website of Yedioth Ahronoth, went one better than its competitors by not editing out Zoabi’s disagreement with the kidnapping, but rather mistranslating and twisting what she said. Instead of quoting her correctly as having told the interviewer, “They are not terrorists. Even if I do not agree with them, they are people who do not see any way open …” Ynetnews quoted her as saying, “They are not terrorists. I don’t agree with you, they are people …” That is a gross mistranslation, so much so that I can’t assume it was an innocent mistake.

Some of this stuff was comic. The Times of Israel reported that on Wednesday morning, “Zoabi clarified that if the teens were killed by their captors, that would qualify as terrorism. ‘Murder is terrorism,’ she said. ‘It is illegitimate and should never be repeated, but the State of Israel is the one that led us to this event.’”

That actually sounds like something she might have said. Now here’s the same morning-after clarification by Zoabi as reported by nrg, Ma’ariv’s website: “MK Haneen Zoabi refuses to apologize. In an interview broadcast on Army Radio, Zoabi said of the statements she made yesterday about the kidnapped boys: ‘I don’t agree with acts like these, but even if the youths are murdered, that’s not terror.’”

Bit of a difference there. And what was nrg’s headline? Once again, it left out the “I don’t agree with acts like these,” and ran only: “Zoabi: Even if the youths are murdered, that’s not terror.”

This is the shit Israelis read and hear every day; this is how they form their opinions not only of Haneen Zoabi, but of pretty much every Arab to the left of Zoabi’s 17-year-old relative who went on YouTube wrapped in an Israeli flag, demanding the release of the three boys and calling on Netanyahu to “wake up and stop cooperating with … the Palestinian Authority [which] is the biggest terrorist.”

And the Israeli media have an international reputation for being “vibrant” and “independent”; in Israel they’re commonly thought to be “leftist.” Maybe in an Israel on some other planet, but in the Israel on Earth, the media, with the exception of Haaretz, are politically dull, obedient and nationalistic as hell. And when the national mood demands it, which is often, they’re deceitful too.