Paradoxically, the feeling that those who were killed could have been our children – feeling as though they are our children – is one of the mechanisms that convinces people to send their children to kill and to die. 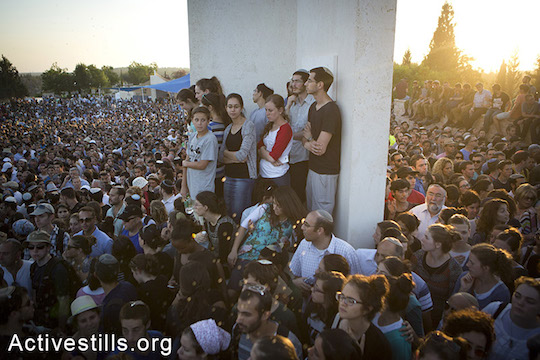 The public, along with the family and friends of Eyal Yifrah, Gilad Shaar, and Naftali Fraenkel, three Israeli teenagers who were abducted over two weeks earlier, take part in their funeral in the city of Modiin, Israel, Tuesday, July 1, 2014. (Oren Ziv/Activestills.org)

In the days following the announcement of the murder of the three abducted teenagers, many friends of mine – most of whom identify with the left – shared feelings of sorrow, pain, and loss. What’s been bothering me isn’t that their participation in this national mourning session is fake, but rather that it’s real. It’s the government, the press, and the public discourse that determine which tragedies become personal, and which ones don’t.

How do the deaths of people we don’t know become a personal event, penetrating us through our hearts and into our bellies? How do our internal organs become political sites, through which our inner (emotional) world and our outer (social and political) world are constructed?

The emotional whirlwind that has consumed many of us is closely connected to the whirlwind in the streets and on social media, to the chaos in Israel that has sent us into an ongoing state of despair, helplessness, or cynicism, and has us looking for ways to emigrate. There are those who express national mourning through incitement and calls for revenge and violence against Arabs. There are those who call – also from a place of pain and grief – to act against incitement and against violence. There’s a third group, that calls for putting politics aside, and giving space to feelings of pain and compassion. To forget left and right, Arabs and Jews, and just leave space for humanity.

Na’ama Carmi, for example, wrote in her blog, in criticizing what she calls the “apologetics” of the Left, which she faults with attempting to place the abduction and murder in a political context:

Just like we would decisively condemn the violent behavior, attacks, and revenge that citizens have taken against innocent Palestinians, and we wouldn’t write “but the rage it stems from is understandable.” No. We will be horrified and we will condemn. Period. There are things that are always forbidden. No “but.”

Because there is room for human pain. Deep sorrow. Lives taken and severed, those of Israelis and Palestinians. For compassion for mourners and those harmed. The heart cries. And basic humanity is missing from many parts of this painful discourse that we bore witness to in the last few weeks.

National mourning plays an important role in society. It’s not just an expression of emotion, though it does have the power to engender emotion on command. Between the mourners calling for revenge and those calling for humanity, what’s missing is the simple question: Why should we be in mourning? What is its role in our culture? 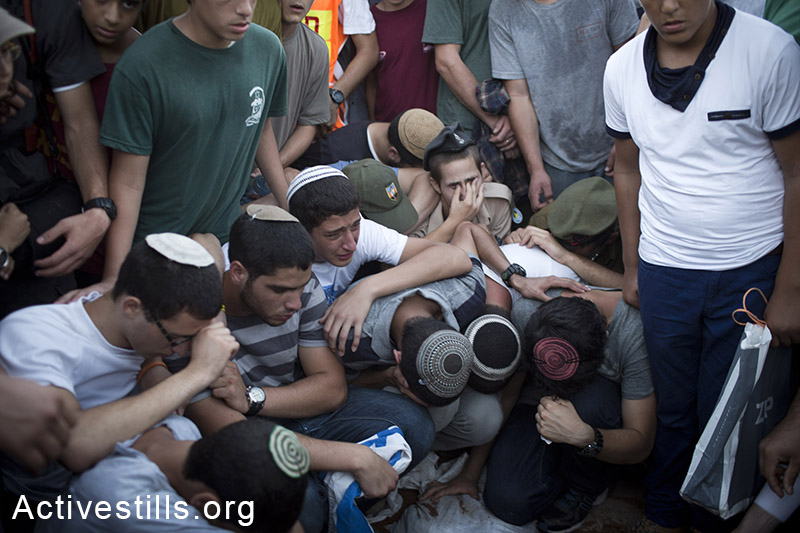 Family and friends of Eyal Yifrah, Gilad Shaar, and Naftali Fraenkel, three Israeli teenagers who were abducted over two weeks earlier, take part in their funeral in the city of Modiin, Israel, Tuesday, July 1, 2014. (Oren Ziv/Activestills.org)

Or, put another way: is it possible to not mourn? Honestly – of course it’s possible. We hear about horrifying deaths every day. Something turned this specific incident – this one and not others – into a collective national trauma. Something turned people we didn’t know into people we almost know, people who could have been our children or us. Something that demands we mourn as though they had been our children, or us ourselves. Something transparent and something that goes without saying, that we went along with.

National identification is just part of it. A Facebook friend of mine, who I’ll call D., copied from the Israel Police website announcements regarding 27 Israelis killed between the abduction and the news of the deaths. Murders, domestic violence, traffic accidents. In Kiryat Gat, a 76-year-old is suspected of killing his 70-year-old wife and killing himself by jumping out a ninth-floor window. In Nazareth, a teenager was stabbed to death. In Holon, a scooter driver was killed in a crash with a truck. In Petah Tikva, a 40-year-old man was stabbed to death. In Kafr ‘Ana, a man was shot to death, likely in a family feud. In Be’er Sheva, a man in his 40s was arrested after throwing his partner from the window.

The list is long and it’s public. Yet “Israeliness” is still not a sufficient common denominator to turn someone else’s personal tragedy into a national one.

I don’t condemn the murder of the abducted teens. First, I’m not a politician and I don’t employ media consultants who force me to issue public condemnations or conduct high profile visits with the families.

Second, the assumption that as a leftist, I somehow support murder – unless I declare otherwise – is an absurdity I refuse to cooperate with.

It’s not that most of the Israeli public assumes that leftists actually support killing. It seems that what the public has a hard time with is the notion that we don’t give more weight to the lives of Jews than the lives of Arabs. Honestly, the assumption that leftists suffer national pain less, that we care less, isn’t baseless – at least in principle.

The foundation of national identity is first and foremost identification with the state and with fellow nationals. As a feminist, we can also identify with the woman who was murdered by her partner – whether she is Jewish or Palestinian. As queers, we can develop identities that cross national lines. As Jewish Israeli leftists – or as people who are trying not to be racist – we can see the Palestinians as humans and refuse to distinguish between blood.

But that vision is beyond the horizon. Most Jewish feminists are still Zionist, most of the LGBT community is willing to serve in the IDF, and most of the Left, it seems, aligns first and foremost with the Jewish Israeli public – even if here and there it sounds a bit “apologetic” in the words of Na’ama Carmi.

I was sorry to hear that the teenagers were killed, as I am also sorry to hear about murders of people I didn’t personally know. Beyond that, I do not take part in this collective mourning. Not out of some revolutionary ideology. I have always stood off to the side in surprise at national mourning, even as a child. Even when Rabin was assassinated. As a child in Israel, I of course experienced the collective command to experience Rabin’s murder as a personal loss. I understood very well that I was supposed to be in mourning, sorrow and pain. It just didn’t feel rational or relevant to me in any way. Sure, there are things that affect those of us more than others, for a variety of reasons. But what are those reasons? What is it that’s so obvious about mourning?

Identification is always political, even – and especially – when it happens “naturally,” when it “goes without saying,” when it’s transparent. That’s also true for the absence of identification, the ability to feel blocked off from the other’s pain – for example, the apathy of the Israeli public to reports of Palestinian deaths.

I’m talking about creating a concrete alternative to this emotional whirlwind. An alternative to paralyzing sorrow, which we supposedly have no choice but to feel. An alternative to the command that we feel what everyone else feels – which we supposedly must do in order be part of the collective. Let’s not forget that national mourning plays an important role in the long run, beyond creating national unity. It helps convince more people to kill and die for the nation. Paradoxically, feeling that those who were killed could have been our children – feeling as though they are our children – that’s one of the mechanisms that convinces people to send their children to kill and to die. When all of the children are everyone’s children, they’re also no one’s.

All of this may seem frightening. Questioning national mourning can lead to social exclusion, as it could be perceived as treason. That’s exactly where we need to create a political alternative – which is also an emotional alternative. Instead of accepting the rules of the government and the media’s game, let’s ask anew and honestly – what are the tragedies here? What is scary? What is sad? What is depressing? Who and what should we be mourning, and how?

Let’s offer — for ourselves and for others — a way to view reality, to experience and feel it, in a way that advances what lives we want to live.