While the mainstream media commonly refers to the West Bank and Gaza as the Occupied Palestinian Territories, it often incorrectly calls the Golan Heights part of Israel. How has the occupation impacted the Golan? And why has the world forgotten it? 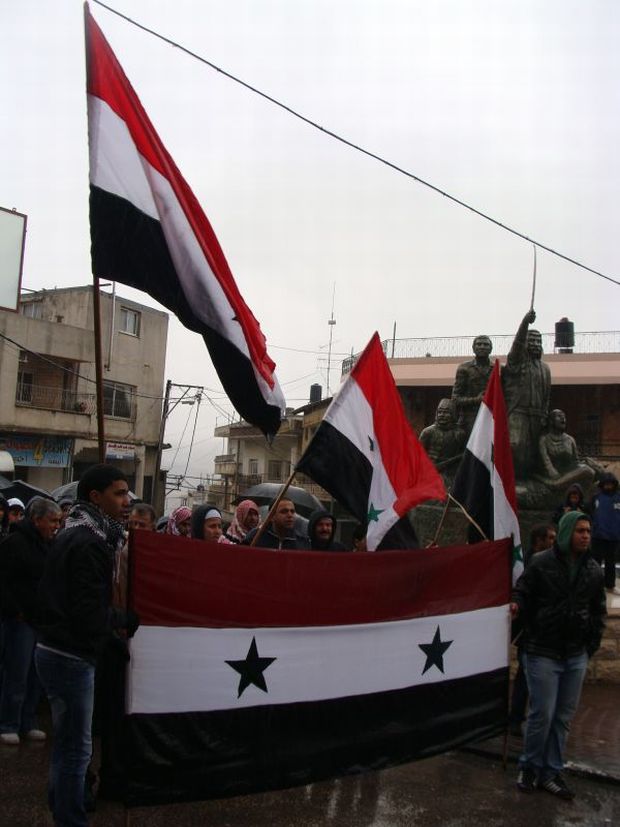 Protesters mark the anniversary of the 1982 uprising that some locals refer to as "the Intifada of the people of the Golan Heights" or the Golan Intifada (photo: Mya Guarnieri)

Earlier this month, The Atlantic published “2011: The Year in Photos.” It included a picture of Palestinian protesters climbing the fence that separates, according to The Atlantic, the “Israel-Syria border… near Majdal Shams.” The caption explained that Majdal Shams is located in “northern Israel.”

Imagine the fury if mainstream media outlets referred to the occupied West Bank as “Judea and Samaria.” That would be equivalent to calling the Golan Heights, which also lies beyond the Green Line, “northern Israel.” Calling the Golan “northern Israel” tacitly legitimizes the 1981 Israeli annexation, which has been rejected by the United Nations on numerous occasions in numerous resolutions and goes unrecognized by the international community.

It is this kind of blind repetition of the Israeli government line that has caused both Israeli citizens and the world to forget that the Golan Heights is occupied territory, not unlike East Jerusalem. Those who live in both East Jerusalem and the Golan Heights are not citizens of the state but residents who pay taxes to the Israeli government and receive next to nothing in return. The residents of the Golan run their own hospitals. They build their own schools. And, as is the case in East Jerusalem and Area C in the West Bank, they usually build without permits as Israel will not allow for natural population growth.

As is the case in the West Bank, Arab residents of the occupied Golan Heights have faced restricted access to their lands, land confiscation, and tight water restrictions that impede their farming. According to the NGO Jawlan- Golan for the Development of the Arab villages, the area’s Israeli settlers use as much as17 times more water per capita than the indigenous inhabitants of the Golan.

As is the case with Gaza, the West Bank, East Jerusalem, and the Palestinian citizens of Israel, Israeli expulsions and expansion has split Golan families into two. In 1967, 130,000 Arab inhabitants were expelled from the Golan Heights, leaving only 6000 residents behind. As a number of Majdal Shams residents told me, every house in the Golan is divided. Everyone has family in Syria, loved ones they see through binoculars at Shouting Hill, cousins they talk to through bullhorns, brothers they have never met.

As is the case with the Palestinians, residents of the Golan have resisted Israeli occupation. Many a member of the Golan Heights’ community has been held in Israeli jails as political prisoners.

But The Atlantic isn’t the only media outlet to forget the occupation of the Golan. For reasons I don’t quite understand, a number of journalists I’ve spoken to consider the Golan “different” from the Palestinian territories. Perhaps it’s easier for journalists to talk about “Israel and the Occupied Palestinian Territories” or the “Israeli-Palestinian conflict.” But to do so is an oversimplification that ignores the broader regional context that includes the Golan Heights.

Or, perhaps, journalists have bought into Israel’s line that the Golan residents aren’t Arab, they’re Druze, and the Druze are “different.” But, talk to most Druze in the Golan and they’ll tell you that they are Druze only by religion. Most identify as Arab, Syrian, or both.

The Golan Heights serves as yet another reminder that the conflict on the ground is very different than the story Israel offers up to the world. The conflict isn’t about the Western world battling the Muslim world; it’s not a clash of cultures or a clash of values; the occupation isn’t a security measure, meant to protect Israel from “terrorists.” And while the Palestinians are the people who, as a whole, suffer the direst consequences of the conflict and the occupation, the conflict and the occupation isn’t necessarily about the Palestinians—it’s about the Jewish state privileging Jewish interests and rights over those of non-Jewish “others.”