A night to remember or a night to forget? I guess neither. But that dilemma pretty much sums up Saturday’s J14 demo in Tel Aviv. Not great vibes – just OK. 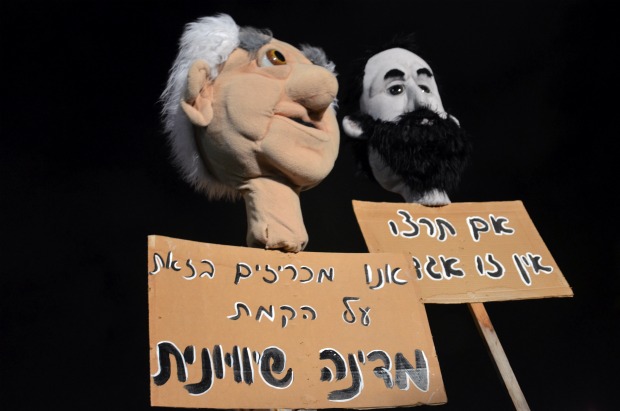 Ben Gurion and Herzl. BG: "We hereby declare the state of equality." Herzl: "if you will it, it is not a dream"

Was it the change of location to Rabin Square? The forced hiatus due to the Schalit swap? The rockets landing in the south as were chanting?

I think it started the week before, when egos again started to surface in the leadership circles. That crazy duo, Daphni Leef and Itzik Shmuli were at it again. Arguing like Rabin and Peres used to before they made up.

And then there was that weird press conference where Leef went just a tad too far, waving her finger at the camera and speaking to PM Binyamin Netanyahu: “This is the last time I am addressing you directly!” OK…. looks like someone’s riding a pretty high horse. I know she’s only 25, but come on. Get that kid an expert!

And Itzik Shmuli, head of the student union? He’s all hurt and angry and won’t come to speak at the protest. Gimme a break.

I have to ask, seriously: Why is it that all around the world, there don’t seem to be any leaders trying to be stars of the protests? Why is it that here we have to have these two guys?

Anyway. So, the missus is babysitting the girls this time, and I’m off to the demo. I won’t do the march, I’m tired. Just straight to the square for me. I get there too early, of course, which already brings my mood down one point on the happy scale.

Then some guy tries unsuccessfully to get the crowd chanting. It was kinda sad. The first speaker was a woman who was just evicted from a building in Jerusalem taken over by squatters. She and dozens of others are now living in tents, with their kids.

The first entertainer comes up. It’s MC Carolina. I’ve only recently disovered Carolina, the last year or two, and I have to say I’m quite fond of her. This is the song she sang on Saturday, “So far”:

Here are some more that I like a lot:

And I love this duet…

After Carolina came a few more speeches, but the best one had to be the fiery Rabea Fahoum, an Arab from Nazareth who studies sociology. He won me over when he joked about how J14 had changed him:

“Suddenly, with the first tent on Rothschild, a space was formed where I could be. We made a partnership where I for the first time could be a full partner. Without having to go through a security check, or a rectal check, at the entrance.” 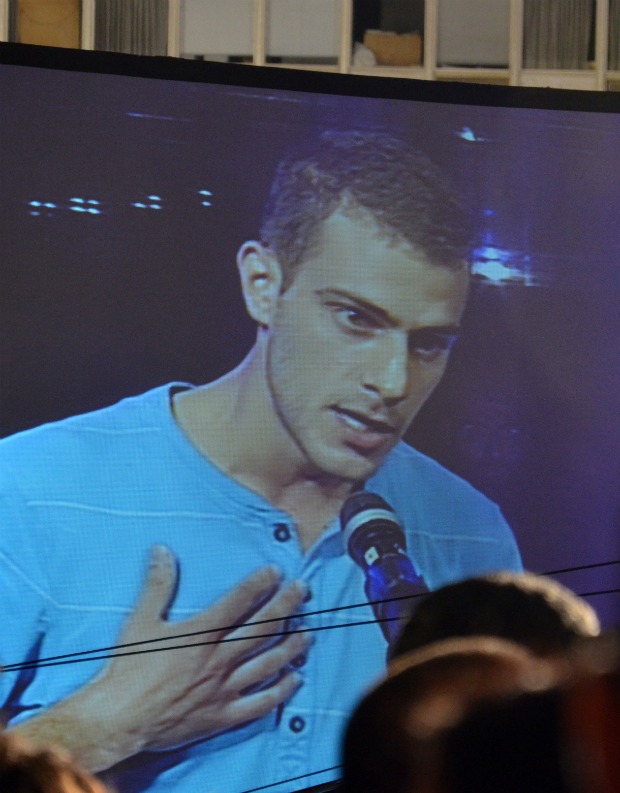 After those, came what everyone was waiting for. The reunification of “Hahamishiya HaKamerit” (the chamber quintet). The Hamishiya used to be one of the most popular comic shows during the late 90’s and and early 2000’s. They started out on the national Channel 1, and were as “out there” as you could get on national TV. I remember watching them in high school, and waiting for the next day to talk with the everybody how hilarious the skits were.

I couldn’t find any translated videos, so here are two where words aren’t really that important. The first is when they’re still on Channel 1, before moving to the commercial Channel 2. It’s 1996, Netanyahu has just opened a tunnel under the Western Wall, violence breaks out and dozens are killed. Here’s what the Hamishiya does, starring the fabulous Keren Mor:

(the recurring phrase is: “open the tunnel Bibi, open it. Open it hard, ooo, open it strong. From behind, Bibi” – I think you get the drift)

[youtube]http://www.youtube.com/watch?v=ZLXGHoGPUyA [/youtube]
Here’s another classic. It’s poetry night, and Menashe is reading curses in Arabic. No need to understand the curses:

[youtube]http://www.youtube.com/watch?v=W9DkBROs_Ts [/youtube]
Unfortunately, the skit itself they did on stage wasn’t that great. The only good part about it was that when they left the stage, Keren Mor rushed back and started to sing “Shir LaShalom” as only she can ruin it. It was hilarious. Shir LaShalom was the song Rabin was singing before he was shot. Only the Hamishiya can get away with that kind of black humor.

Afterwards, Daphni gave her speech. As usual, they save her for last. I can’t help but feel that people are getting tired of her. I know I am. 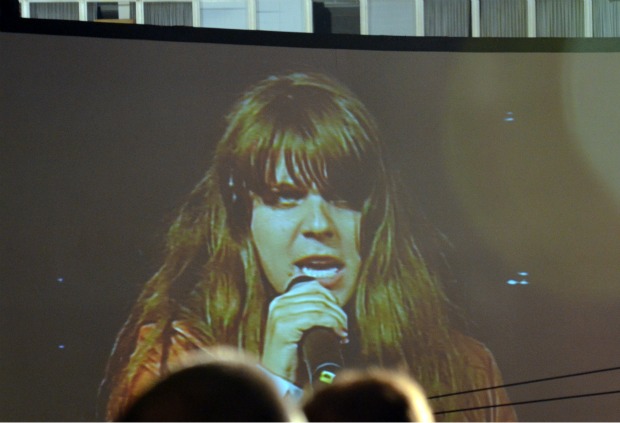 Shalom Hanoch, a legend, in my humble opinion, came to sing (if you call that singing, his voice is practically gone from all the cigarettes) his famous hit “Waiting for the Messiah”, which was written after the stocks in Tel Aviv crashed in 1985.

It wasn’t a great demo. But it’s just one in many to come. You can’t bring corporate capitalism down in a few months. It’ll take a while.

See you at the next one.