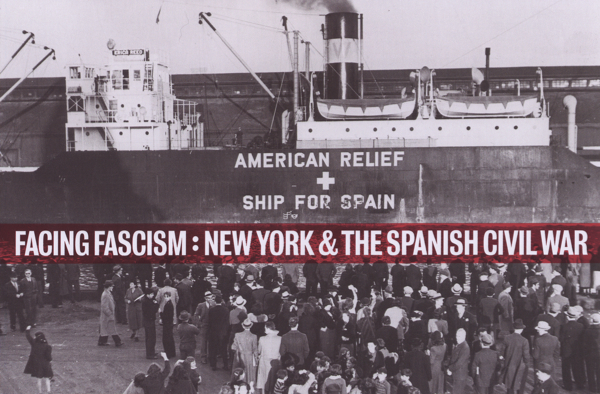 The Lincoln Brigade, which was heavily Jewish, departing New York to fight for the Republicans in the Spanish Civil War. (photo: Museum of the City of New York)

Haaretz published on Sunday an article headlined “A third of Spaniards hold a negative opinion of Jews.” In the article, journalist Barak Ravid notes that the survey was commissioned by Casa Sefarad-Israel, an organization created inter alia by the Spanish Foreign Ministry; and that it concluded that the rise in anti-Semitism was mostly due to Israeli government policy  and actions- specifically the Gaza assault and the Lebanon War. The survey took place before the IDF’s assault on the flotilla; it would be interesting to find out if that failed attack did indeed cause a rise in “anti-Semitism.”

Just how much anti-Semitism is there in Spain? According to the CSI data, as published, 34.6 percent of Spaniards hold “negative views” of Jews, and 46 percent hold a “positive view.” What does that mean? It’s somewhat unclear. The Anti-Defamation League, in its report about 2009 report about Spanish anti-Semitism, showed its usual shady data (it considers a comparison between the Israeli policy towards Gaza and Nazi ghettos to be anti-Semitic, which means they would probably number British PM Cameron among the anti-Semites), but had to unwillingly admit that as regards actual anti-Semitic events, it could count just three. And two of them, the ADL admitted, had more to do with the policies of Israel than with “classical” anti-Semitism. There are some 40 million people living in Spain; if 34.6% are to be considered anti-Semitic, and three rather lame attacks is all they could produce, one has to wonder about the threat posed by Spanish anti-Semitism.

Amusingly, the ADL considers the fact that only 18 percent of Spaniards held “a very positive opinion” of Jews as proof of anti-Semitism, even though in 2002 only 2 percent held that view. When Abe Foxman wants to make it so, an increase of 900 percent in philo-Semitism can also serve as a proof of anti-Semitism.

The Israeli embassy, naturally, took the claim that Israel’s policy is responsible for increase in anti-Semitism rather badly, paying it much more attention than the Haaretz piece did. It made three claims: first, that Spanish anti-Semitism existed in Spain prior to the existence of Israel (which is uncontested; everybody knows, or thinks he knows, of the Inquisition, but in my book the Limpieza De Sangre laws are the real thing); second, that Spanish parties and media are overly influenced by pro-Palestinian organizations; and third, that there is “confusion, ignorance between Jews and Israel by large sectors of Spanish society.”

To which I say, the lady doth protest too much. How do you mean, “confusion”? How did this confusion come about? How did it originate? Could it be, perchance, that the source of the confusion is the planned policy of Israeli governments? A policy expressed, for instance, in the calls of Prime Minister Sharon and other notables for Jews to abandon their homelands and emigrate to Israel? Can we posit that this confusion is, perhaps, the result of Israel’s standing policy of denouncing anti-Semitism wherever it may find it? Can this, perhaps, be the result of the Israeli government’s recent hysterical response to the stealing of the Arbeit Macht Frei sign in Poland – making demands of a foreign government in what was an internal Polish criminal affair?

Israel owes of its existence largely to the fact that the leaders of the Zionist movement managed to convince foreign statesmen, that they speak for the entire Jewish people – even when this was a blatant lie. Zionist leaders, such as Menachem Ossishkin, did not hesitate to play upon the common acceptance of such frauds as The Protocols of the Elders of Zion when it suited their purposes. Nahum Goldmann used to travel the world, holding the empty title of “President of the World Jewish Congress”, which played nicely with those themes. The Israeli flag contains a singular Jewish sign; Israel defines itself as a Jewish state. So from where do you get the chutzpah to say “there is confusion, ignorance between Jews and Israel”?

Israeli children have been preached at for generations that the creation of Israel solves “the Jewish problem,” and that any other solution could only end in utter failure. We now see that the creation of Israel  did not solve any problem. Rather, Israel is itself becoming the problem of the Jews. It is, almost singularly, responsible for creation of a new anti-Semitic myth, that of “dual loyalty”. This legend has grown mainly due to Israel’s propensity for using Jewish secret agents. Jonathan Pollard is the most famous one today, but a generation before him we had Moshe Marzuk and Shmuel Azar (in Israel they are often called “The Cairo Martyrs,” since they were executed by the Egyptian authorities) and the rest of the Jewish terrorist group operating in Egypt in the early 1950s at the behest of AMAN, Israel’s military intelligence.

One assumes that the use of Jewish agents was sometimes, particularly in the Middle East, attended by a cynical way of thinking – i.e.,  if their capture causes anti-Semitism, so much the better. Zionism is a parasite, feeding upon anti-Semitism; it cannot exist without its mirror image (anti-Semitism, of course, can do quite nicely without Zionism). One only has to watch the eagerness with which anti-Semitism, or semi-anti-Semitism, is covered in the Israeli media: maybe now all of those Jews, living the good life abroad, will come to their senses and say we were right all along. In the Pollard case, this tactic blew up in Israel’s face; American Jewish leadership turned against it. In several cases in the Middle East, particularly in Iraq, it worked well enough.

A person prone to conspiracy theories would say that the better the life of Jews abroad is, the more they’ll turn away from Israel. This is the Jewish historical cycle: the acceptance of Jews by society leads to abandonment of Judaism. Therefore, Israel has a clear interest in the promotion of anti-Semitism: it leads to a (rather logical, all things considered) burst of Jewish nationalism, the reasonable outlet for which is emigration to Israel. Which will increase the number of Israeli Jews, as well as the number of IDF draftees.

Given that Israel couldn’t manage in 70 years to build subway system linking Greater Tel Aviv, the aforementioned theory suffers from the two classical flaws of conspiracy theories: the assumption that events are the result of a malicious will rather than sheer stupidity, and the assumption that a conspirator is omnipotent. The sad truth is that Israel doesn’t actually care about world Jewry. It plans its wars and military operations without sparing a thought to the fate of Jews living outside of Israel, who are not a side in the hostilities.

Which is as it should be: Jews living abroad are not Israeli citizens. But if this is the path Israel chooses, it should stop putting them at risk. It should publicly announce there is no relation between it and Jews living outside its borders, that it has no claims over them, that it does not pretend to represent them, and that it does not expect either their affinity or their charity; and accordingly, it ceases granting them privileges – such as an automatic Israeli citizenship whenever they wish it.

Choosing this path, however, will bring Israel dangerously close to the status of a normal nation-state, which is disparagingly called around here “a state of all its citizens.” The ability of any Brooklyn good-for-nothing to get, with no effort, a citizenship granting him status well above that of a Palestinian whose family lived here for generation is a major pillar of the Israeli discriminatory state. Therefore, this won’t happen – and the state whose creation was supposed to solve the problems of world Jewry will remain one of the prominent reasons for anti-Semitism.

(The original version of this post was posted two days ago on Friends of George. The translation is mine).