For decades, Kibbutz Beit Alfa has sold riot control vehicles to despotic regimes such as Pinochet’s Chile and Nkunrunziza’s Burundi.

By Eitay Mack (translated from Hebrew by Ofer Neiman) 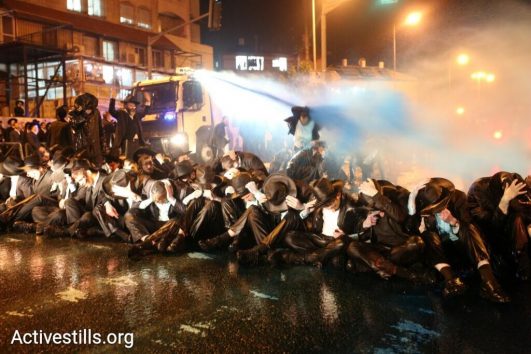 Hundreds of ultra-orthodox demonstrators blocked the entrance to Jerusalem last week to protest the arrest of yeshiva students deemed ‘deserters’ by the IDF because they refused to be drafted into the IDF. Israeli police sent in special riot control vehicles that sprayed colored water on the demonstrators. The footage of phosphorescent blue water splattered on the black-and-white-clad Haredi protesters appeared across Israeli media, mostly due to the colorful contrast. These riot control vehicles, produced by Kibbutz Beit Alfa, which belongs to the socialist-Zionist Hashomer Hatzair movement, have been sold to despotic regime for decades. They colored water helps mark protesters, making it easy to arrest them even after they leave the scene.

Lily Traubmann, Tamara Santos Traubmann, and Daniel Silberman, survivors of the Pinochet regime in Chile, whose loved ones were abducted and disappeared, filed a freedom of information request asking the state to disclose its ties to the Pinochet regime. An affidavit by Israeli citizen Eitan Kalinsky was attached to their petition.

In 1989, Eitan and his wife were sent by the Jewish Agency to teach at a Jewish school in Santiago, Chile’s capital. It was the twilight of Pinochet’s brutal dictatorship, responsible for the murder and disappearance of 3,200 people, and for the torture — by some of the cruelest methods in the modern era — of 40,000 people.

During their time in Chile, Eitan and his wife attended 10 demonstrations against the dictatorship and in support of democracy. In his affidavit, Eitan states the following:

During one of the protests in Santiago there were vehicles with colored water cannons, and the color of the water changed every few minutes, for example a very strong green. The Hashomer Hatzair envoy told me: “Look, it says ‘Hakibbutz Haartzi Hashomer Hatzair.'” We all knew it was made in Kibbutz Beit Alfa. The colored water pushed the people back with immense force and one shop window collapsed. I was an envoy of the State of Israel and could not criticize the state, so I kept my pain to myself.

It was the left-leaning parents who turned to us and asked how Israel could support Pinochet. I did not say one bad word about Israel, but at home I shouted at the walls. The demonstration with the water cannons was tough. The protesters did not give up easily. They retreated only because of the water cannons. Others told me that at protests near the universities in the older city, there was even greater use of water cannons. I saw them only that time, at the protest marking the [1973] coup in September 1989.

According to the report of the Chilean government’s commission for the investigation of the Pinochet regime’s crimes, in 1989, 19 citizens, women and men, were murdered or disappeared in Santiago. The end of the 1980s was a critical time in Chile. The entire world held its breath to see whether Pinochet would allow the transition to democracy. The extent of repression diminished compared to the previous years, and masses of people protested across Chile in support of democracy. But Pinochet’s security forces continued to torture, disappear, and murder civilians who took part in protests, especially those recognized as leaders or prominent advocates for the democratic transition.

According to Amnesty International, riot control vehicles made in the Beit Alfa Technologies factory have also been used in Burundi since the beginning of a political crisis in April 2015, due to the un-constitutional extension of President Nkurunziza’s term. The kibbutz’s website boasts of a visit from Burundi’s Minister of Interior at the factory that produces the riot control vehicles in June 2013. The vehicles were apparently delivered to Burundi in the beginning of 2015.

Over the past two years, the UN and the international community have been on alert for genocide in Burundi. The European Union has frozen all aid to the country’s government. Serious human rights violations have taken place there: protesters have been murdered at demonstrations or in their homes; bodies, including those of minors, were found shot and handcuffed, sometimes even mutilated; human rights activists and journalists have been assassinated and disappeared. The government and the opposition carry out revenge acts in neighborhoods associated with the rival side. Sporadic fighting has taken place across the country, especially in the capital of Bujumbura. Some detainees have been taken to secret detention centers, including the homes of the president and the minister of internal security. Officials in the country’s security establishment have admitted to preparing assassination lists with the names of opposition figures and members of the security forces deemed questionably loyal to the regime.

UN reports from September 2016 and August 2017 indicate that the violence in Burundi may constitute crimes against humanity. According to UN experts, the government’s security forces have used excessive force—for example, the use of live fire  against protesters, including those attempting to leave the scene, and attacking protesters after demonstrations have been dispersed. It was also revealed that the police’s “special anti-riot unit” has turned its headquarters in Bujumbura into a torture center.

The women and men arrested for taking part in protests, or on suspicion of having done so, are subjected to cruel torture methods, including: tying weights to detainees’ testicles; crushing fingers and toes with a vise; imprisonment in a closed container; imprisonment with a relative’s dead body; forced sitting on acid, glass shards or nails; gang rape, including in the presence of children; poking hands and objects in the genitals of women and girls; injection of toxins into testicles and other body parts; stabbing by knife or machete; stabbing women’s breasts; electrocution; burning by blowtorch; covering detainees’ bodies with mud; tying detainees’ hands behind their backs for long periods of time; humiliation and the use of derogatory expressions, including ethnic slurs; poking fingers in detainees’ eyes; and hanging detainees upside down.

The regime in Burundi has even turned its violence on children. In May 2016, after a few high school students scribbled on photos of the president, hundreds of students were expelled. Burundi’s security forces detained around 60 students and the police took over 16 schools. 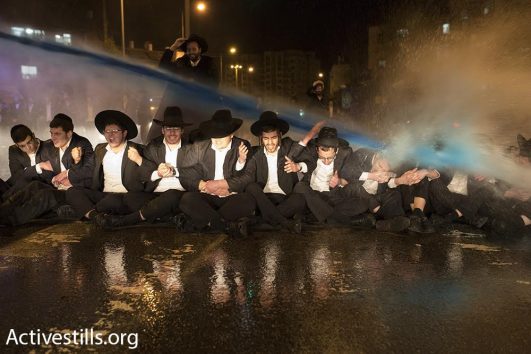 In recent years, the Israeli media has sounded the alarm over militaristic education and right-wing indoctrination in the settlements. But while the Israeli Zionist left is concerned about the educational system in the West Bank, it has failed to examine what’s going on its own backyard. The members of Kibbutz Beit Alfa not only finance their community by selling crowd control vehicles that make it easier to arrest protesters; they apparently also view this as a source of pride.

On the kibbutz’s website, alongside ads and reports on the collection of glass bottles for recycling, announcements for a pool party, a sing-along evening, a successful harvest, an exhibition of one member’s’ paintings, and birthday parties for members who have turned 80, one can also find reports on the release ceremony for a new advanced crowd-control vehicle, commissioned by the Israeli police, and visits from Kenyan and Brazilian police delegations to examine these vehicles.

The pinnacle of this period, I believe, was the sale of 45 riot suppression systems to prisons in California, flying out 30 riot control vehicles to Zimbabwe via a huge Russian Antonov plane, and the manufacturing of 17 crowd control vehicles within 4 months (a very short period) in the Norol factory in Turkey, and transporting them by land and air to Kazakhstan. In all these, your guiding hand has made sure the deals were signed and completed.

How do the parents of Kibbutz Beit Alfa explain to their children what their factory produces and to whom it sells its products? What does a parent in the kibbutz do when their child sees a kibbutz-made vehicle spraying water on ultra-Orthodox protesters in Jerusalem on television, or on pro-democracy protesters in Burundi? Is there anyone in the kibbutz who finds this abnormal? Are there conscientious objectors there?

In May 2016, we sent a letter to the secretariat of Kibbutz Beit Alfa and to the Beit Alfa Technologies factory. We asked them respond to the following questions: When were the aforementioned crowd control vehicles sold to Chile? What were their technical specs, and who in Israel and in Chile had been involved and authorized the deal? We also asked them to publish a statement, in Hebrew and Spanish, accepting responsibility for ties with the Pinochet regime and committing not to cooperating in the future with repressive regimes that violate human rights.

A year and a half later, Chilean-Israeli citizens Lily, Tamar and Daniel still await a response. Meanwhile, the party goes on in Kibbutz Beit Alfa.