The nationalist machine tries to ‘sell’ city residents a story about honoring ‘defenders.’ But the latter respond: they are not defending anything anymore. They died and all that was left is a monument.

The central square in Bat-Yam, my hometown, is known as “the matseva” (“the headstone” or “monument”). As a child I did not really get the point. I knew the word “headstone” from graveyards, and I knew my grandmother had one. I did not know how my grandmother had a headstone on one side of the city, on the Holon border while there is another one on the other side of the city, by Jaffa. Later, when I was a schoolboy and we were assigned to do a report on the city, I found out to my astonishment that its name was not Headstone Square, and that its official name was “Defenders’ Square,” which is how it appears on all the maps of the city. In any case, local residents call it “headstone,” and I doubt if any remember its official name.

A few years later, when I had to write a text for the catalog of the city’s first landscape architecture biennial, I discovered, again to my amazement, that there is a history of disagreement between the establishment and the residents regarding the place’s name. Apparently that location was the site of a military post tasked with defending the city from the Arab residents of Jaffa in the war of ’48. Its official name was the King George post, after King George V, during whose reign the British granted the Balfour Declaration. No one in Bat Yam had heard of it, apparently. They called it “the death position” because of three Bat Yam residents who were killed there. 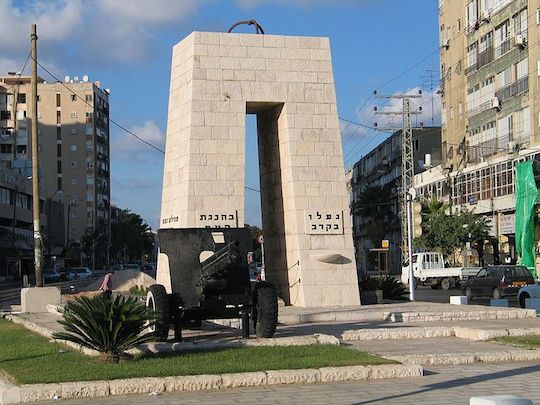 You see? It’s not that I disrespect Israel’s Memorial Day, god forbid, and certainly not the memory of the fallen. It’s simply that I cannot tolerate the false heroic designer wrapping that the nationalist machine tries to ascribe (with significant success) to simple cases of tragic, pointless, coincidental death – an unholy death of someone who without a doubt simply wanted to go back to his mom and dad, or to a woman or friend, or even to his dog and cat, so long as he did not become the “next victim.”

While the nationalist machine wanted to name the place after a king, albeit a hero, but nevertheless a meaningless name to the locals, they simply called it the place “death” — after what had occurred there. While the nationalist machine tried to peddle a story about “defenders” to the townsfolk, (in the present tense, no less!!!), the locals said: “What is this crap? What defenders? They are not defending anything. They have died and all that is left of them is a headstone.”

And when you look at it this way, at death that leaves nothing more than a headstone behind, I do not think there is any point in separating and disconnecting between deaths in Bat Yam and in Jaffa — that which is “ours” and that which is “theirs.” What kind of person can stand at attention, shed tears and agonize for the death of one son, and not honor the death of another, simply because the nationalist machine — the manufacturer of lies from the Bat Yam square — calls the other son “enemy”!? I will never be able to understand or accept that.

I feel I can only truly honor and agonize for the fallen by honoring all of them.

A relative of ours, born in Egypt, lost her son in the Yom Kippur war on the Egyptian front in Sinai. Not that it would have been less painful had he died on the Syrian front, but for her, the fact that he died on the Egyptian front was meaningful. This is because while she was 100 percent Israeli, she saw herself as Egyptian as well. When I interviewed her, she told me that it took her years to admit to herself that she loved Egypt, even though they — “the enemy” — killed her son. Today, she wishes to meet an Egyptian family that lost their son in the same war. I imagine that deep within her soul even she knows that the definition of “enemy” is very tricky and changes over the years. I believe that distinguishing between the two is redundant, since that distinction will change over time. In the meantime, all those lives taken and ruined around us are wasted.

Related:
On Memorial Day, Israelis must reflect on Palestinians’ collective punishment
48 human beings were massacred – and we have forgotten them