Thousands of Palestinians in the West Bank and Jerusalem march in solidarity with Gaza, in the largest such protest in years. At least two were killed. 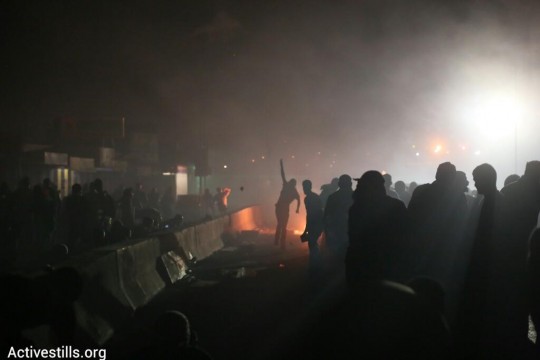 Thousands of Palestinians marched from Ramallah to the Qalandia checkpoint in East Jerusalem, where they clashed with Israeli forces. (Oren Ziv/Activestills.org)

At least two protesters were killed and more than 100 wounded in clashes with Israeli security forces in the West Bank and East Jerusalem late Thursday night, as thousands of Palestinians marched from Ramallah to the Qalandia checkpoint, which separates Jerusalem and the West Bank.

The protest, against Israel’s assault on the Gaza Strip, was the largest the West Bank has seen in years – according to some Palestinian demonstrators, the largest in decades. As of Thursday night, 805 Palestinians  had been killed in Gaza since Israel launched its offensive on July 8.

The West Bank march quickly spread to East Jerusalem, where police were said to be clashing with protesters in the Old City, Silwan, and other neighborhoods. Protests were also reported in Nablus and Bethlehem.

Thousands of Palestinians march from Ramallah to Jerusalem. Largest protest in decades. #48KMarch via @Ramideramallah pic.twitter.com/mSakFVfxQv

According to Haaretz reporter Amira Hass, Palestinian ambulances, blaring their horns, were streaming in the opposite direction of the march, evacuating protesters wounded by Israeli fire at the checkpoint.

The West Bank protest came during Laylat al-Qadr, the 27th night of Ramadan and  the holiest night of the year for Muslims. According to the Jerusalem Post, Israel Police Micky Rosenfeld said that hundreds of officers would be stationed around the Old City during Friday prayers, and that no Arabs under 50 would be permitted to enter Damascus Gate.

The west bank now…people have had enough and have nothing to lose pic.twitter.com/BcIKm77U7p

Earlier Thursday, Hamas political bureau head Khaled Meshaal said Hamas was prepared to sign a ceasefire agreement with Israel, as long as Israel’s siege of Gaza is lifted. In comments made from Qatar, Meshaal underlined that he also wants Gaza’s border with Egypt to be opened.

“We want an international airport, we want a seaport, we want an opening to the outside world, and not the situation where we are controlled by a few border crossings that turn Gaza into a huge prison, where no one can leave even for medical treatment or to work […] When we get a clearly worded drafting that guarantees these things, and the international community gives its backing to this draft – than the fire can be stopped, even today,” said Meshaal.

While U.S. Secretary of State John Kerry presented a proposal for a ceasefire on Thursday, Israel indicated it could broaden its offensive. The U.N. Office for the Coordination of Humanitarian Affairs (OCHA) said Thursday that Israel had established a 3-kilometer-wide “no-go” zone along its border with the Gaza Strip, encompassing 44 percent of Gaza’s territory.

Also Thursday, an Israel military spokesman said in a statement that the army was investigating the matter of the deadly strike on the UN-run school in Beit Hanoun, where many Gazans had sought refuge from Israeli shelling on residential areas. Israel maintained that Hamas militants fired at soldiers from the school, but Palestinians say the school was occupied by civilians fleeing the violence.

A Gaza spokesman for UNRWA, the United Nations agency for Palestinian refugees, said they had received no warning before Israeli forces shelled the Beit Hanoun school that was serving as a shelter. The attack killed at least 17 and wounded more than 200 of the displaced civilians who had taken shelter there.