Two recent incidents in Hebron illustrate the dangerous and wrongful manipulation of violence against civilians to advance political ideology. The Left is guilty too — and it must change.

Masked settlers in Hebron attacked a Palestinian man who was being detained by the Israeli army on Saturday. When a soldier tried to stop them, the Israeli settlers turned on him as well, before discharging pepper spray at the Palestinian.

Last Thursday in Hebron, five young ultra-Orthodox American yeshiva students driving towards the adjacent settlement of Kiryat Arba took a wrong turn into the Palestinian neighborhood of Jabel Johar. A gang of young Palestinians spotted them and attacked their car with stones, then set it on fire.

When I started writing this article, it was supposed to only be about the two violent incidents in Hebron. By the time I finished writing, another person had fallen victim to the conflict. Reham Dawabshe from Duma, near Nablus, became the third person to die of her wounds from a firebomb attack that incinerated her home, her husband and her toddler son.

The incident in Hebron could easily have mirrored the grisly scene in Duma. Instead, the five Jewish students were led out of the car by another young Palestinian who took them up a steep dirt alley. Another Palestinian man rushed them into his home to shelter them. The Jerusalem Post reported that he used one of the students’ phones to call the Israeli security authorities, who came to get the yeshiva students out about an hour later.

The close timing of these attacks creates a sense of helpless symmetry to the violence: Israelis and Palestinians kill or try to kill each other.

Yet that paralyzing sentiment too easily gives way to something worse: each side quickly exploiting the events to prove the evils of the other side.

It is troubling to me that the Left does this too. Even here on +972 Magazine, we reported the settler attack on Palestinians in Hebron, without mentioning the mob that nearly killed the Jewish students just a few days earlier. 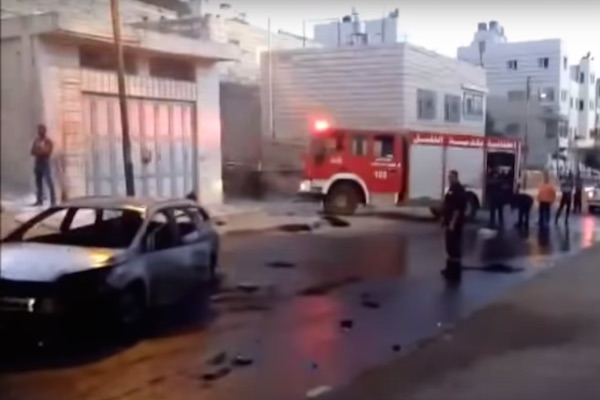 The burned-out car of five American yeshiva students who were attacked in Hebron by Palestinian youths. (Screenshot)

The error comes from a mentality that political context is a trump card; that the violence is not symmetrical because (insert “your side”) is the victim.

Context is of course essential, and the political situation in Hebron is explosive: it is the most divided city between river and sea. Heavily protected Israeli settlers live in a section of the city called H2, which under an Oslo-era agreement fell under absolute control of the Israeli army. The Jewish settlement in H2 juts into the city of Hebron like a finger. On the other side, it is adjacent to the slightly more suburban settlement of Kiryat Arba, where settlers maintain a tomb for mass murderer Baruch Goldstein and place stones of honor on the grave as per Jewish tradition.

Most Palestinians in Hebron live just a few streets over in area called H1, the majority of the city, where Palestinian police are theoretically responsible for security but the Israeli army has complete freedom of movement and operation. Israeli soldiers regularly enter H1, the “Palestinian side” of the city, to make arrests, conduct raids and disperse protests. (See a map of the division of Hebron here.)

The most recognizable symbol of the city’s segregation, however, is Shuhada Street, the once thriving Palestinian main market street which today is open only to Israelis. The settlers are sometimes armed, while Palestinians are subject to a tight permit and inspection regime, with regular body frisking and army checkpoints they must pass through in order to move around their neighborhoods.

When I last visited in 2012, a sidewalk was separated for Israelis and Palestinians by a low concrete barrier. 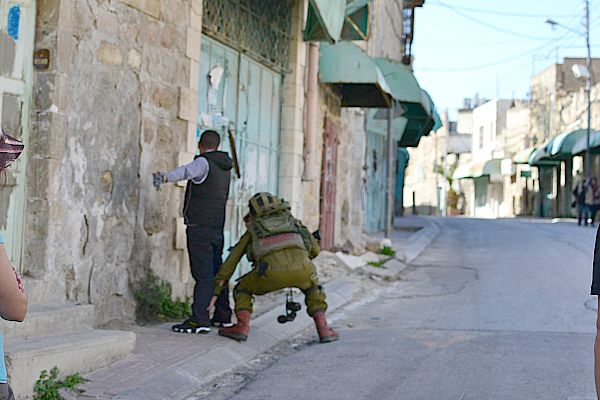 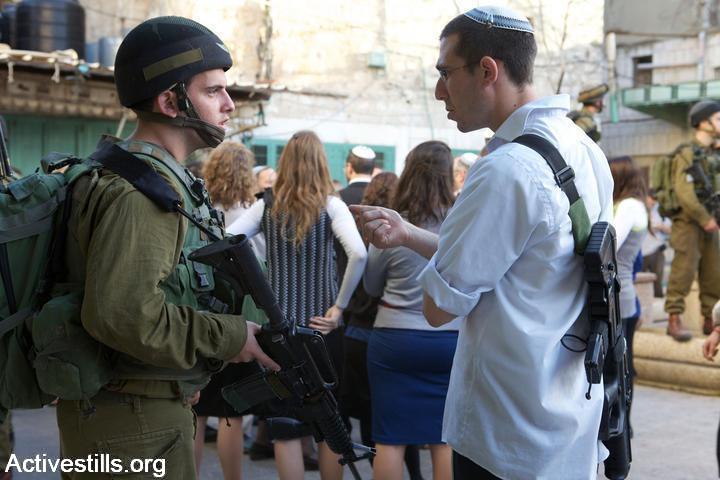 File photo of an Israeli soldier speaks with an armed Israeli settler in the Old City of Hebron. (Anne Paq/Activestills.org)

The neighborhood where the tourists were attacked, Jabal Johar, is just outside Kiryat Arba. As far back as 2001, Human Rights Watch reported ongoing settler attacks against Palestinians there. According to that report, “many of the Palestinians believe that the settler attacks are aimed at making life unbearable for them, forcing them to leave their homes, and allowing the settlement to expand.” It is unlikely that these assumptions have changed.

And nothing about this context justifies violence against civilians, ultra-Orthodox Jews or anyone else. The Palestinians who saved the American Jews knew that.

Interviewed on Israel’s Channel 2 news a few days later, Faiz Abu Hamdiyeh, the man who sheltered them in his home, said the act was absolutely natural and completely clear to him. He would have tried to fend off the thugs with a sword he keeps at home, even if it meant risking his life, he said.

Abu Hamdiyeh said he has faced threats and anger since Thursday. “’We’ll burn his house and cut off his head,’” he recalled to Channel 2, with a nervous chuckle.

To ignore, downplay or even explain away violence against Jews, which can happen on the Left, is completely misguided and does a disservice to all. Neglecting this story means foolishly ignoring Abu Hamdiyeh’s act of sheer heroism and personal risk.

Instead, we could be commiserating how both he and Israel’s president have received death threats for taking humanizing positions towards the so-called “other,” and we could be supporting one other.

The political circumstances and daily lives of Israelis and Palestinians are not equal but the humanity of civilians is. The universal wrong of harming them goes in all directions.