We must let go of the fear that we will delegitimize ourselves. We must risk being ostracized by our communities and friends, and say: Yes, we deny the legitimacy of the settlements. Yes, we want to delegitimize the occupation. 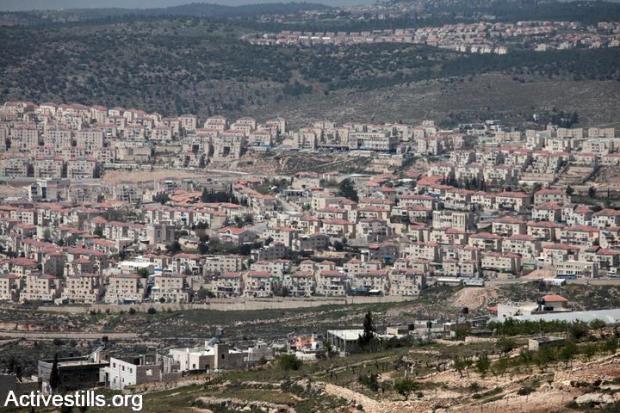 The Israeli settlement of Beitar Ilit. Yes, the left is trying to delegitimize settlements (photo: ActiveStills).

Last week, a protest letter signed by 40 leaders of the American Jewish community and initiated by the Israel Policy Forum was sent to Israeli Prime Minister Benjamin Netanyahu, urging him not to adopt the recommendations in the Levy Committee’s report. In the letter, they said that the report’s recommendations, if adopted, would jeopardize Israel’s credentials as a democratic state, and harm the chances of achieving a two-state solution.

The Levy Committee’s main findings (page 83 of the report, in Hebrew) are that the laws of occupation do not apply to the West Bank, and that Israel has a right to settle all the land of Judea and Samaria. The report recommends, among other things, that the government of Israel remove administrative obstacles preventing the authorization of new construction in the West Bank, and that it refrain from demolishing unauthorized construction in the West Bank (despite a Supreme Court order), until such construction can be retroactively legalized. The report also recommends that land seized by military order should be utilized for settlement construction, and that the Israeli Civil Administration’s use of the ‘nuisance’ order, issued to halt and remove Israeli settlers who trespass onto private Palestinian agricultural land, be cancelled.

How surprising, then, that in a rebuttal letter to the Israel Policy Forum, Ambassador Alan Baker, a member of the Levy Committee  (and former legal advisor to Israel’s Foreign Ministry), accused the letter’s esteemed signatories of adding “fuel to those who seek to delegitimize Israel’s right to exist,” by expressing their “incorrect and ill-advised assumptions about the report.”

The ludicrous conclusions of the Levy Committee’s report will no doubt do enough on their own to discredit its authors and propagators. But accusing people of delegitimization, as Baker accuses the 40 signatories of the IPF letter, will always be a trump card for the right in Israel (and the pro-Israel lobby abroad which supports it) as long as we, the left in Israel (and our liberal two-staters abroad who support us), continue to pretend that it is not our intention to delegitimize.

We are trying to delegitimize the occupation, the cynical use of the security narrative to justify it, and the daily human rights abuses and lack of protection that Palestinians suffer as a result of it – peace process or no peace process – and without wagging fingers at Iran, Syria or Sudan in comparison. We perceive the roots of Israel’s legitimacy differently than the hand-selected members of the Levy Committee, and those who selected them. We do think that by delegitimzing – not Israel’s existence, but many of its long-standing policies and practices – we will save Israel from itself and protect it for future generations.

So although I commend the authors and signatories of the IPF protest letter for their courage to stand up and speak out, I fear that they, like many of us on the left in Israel, will not be able to beat back the accusations of “delegitimizing Israel” unless we – both in Israel and in the US – make our aim clear. As long as both progressive American Jewry, and the Israeli left, are afraid of being accused of delegitimizing, the right keeps its silver bullet, its trump card, because the most hurtful thing they can say to us is that we’re delegitimizing Israel.

As both an Anglo-Israeli, and a left-wing Israeli, I have struggled with this personally. How can someone accuse me of being anti-Israel or delegitimizing its right to exist if I chose to uproot and leave my country of birth to build a life in Israel? Do I really need to prove myself any more than this? Living as an Israeli, in an Israel that most definitely exists, quite frankly, the pro-Israel question is moot.

We must let go of the fear that we will delegitimize ourselves. We must risk being ostracized by our communities and friends, and say: Yes, we deny the legitimacy of the settlements. Yes, we want to delegitimize the bureaucracy that sustains blanket demolition orders on all the houses in one village (what, they’re all terrorists?).

Legitimacy is not the monopoly of the right, and so here is my call to the authors of the IPF letter: Before you clamor to prove your credentials, and fight to stay in the pro-Israel club, stand firm on what your letter was really saying. Acknowledge that you fundamentally disagree with the Israeli government on exactly which forces are driving us towards international isolation and the next regional war. Be proud to assert that it is Israel who must step up and make a change. Your critics, on the other hand, think the rest of the world must capitulate and accept the status quo, while the Western powers remain in perpetual purgatory as punishment for the Holocaust.

Let the Levy Committee declare that “there is no occupation”, and let the Government continue its attempts to ban funding for left wing and human rights NGOs. The legitimacy that Israel so desperately seeks abroad is in our hands, and it will not come by silencing us and trying to paint us as traitors. It will come from people like the signatories of the IPF letter, who advocate for justice and the rule of law, who counsel democracy and diplomacy, and who lead their communities to do the same.

Caroline Beck is an Israeli human rights advocacy professional. She moved to Israel in 2005 and since then has worked with Israeli and Palestinian experts towards a resolution of the Israeli-Palestinian conflict.